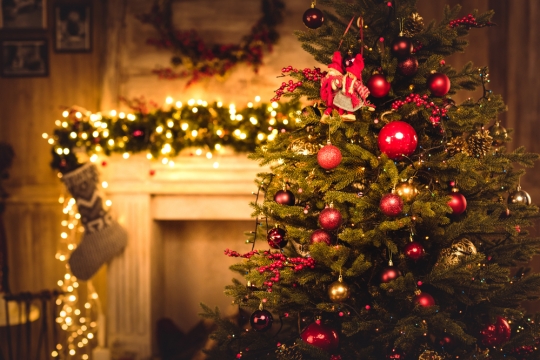 Advent, the traditional run-up to Christmas, begins on 1 December, but the big sales drive starts soon after La Toussaint on November 1. The Christmas market season starts on December 1. Here at Maré le Bas the dates to remember are Corbigny (8/9 December) and Lormes (15 December). 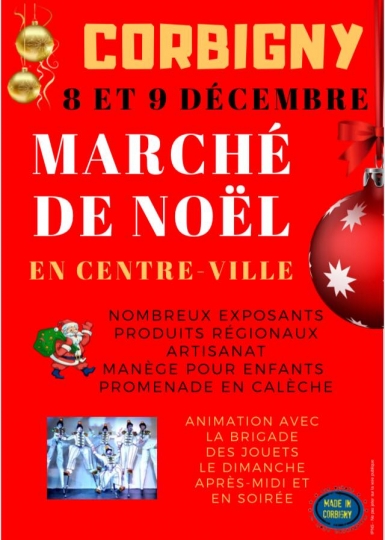 The Corbigny Christmas market was held in the Abbey until the health and safety squad declared it a fire risk. Maybe it was, with all the candles, but it was delightfully atmospheric and we miss it…Anyway, Corbigny’s Christmas market takes place out of doors on December 8 and 9 and features Le Père Noël, street musicians, a merry-go-round and, on the Sunday, performances by La Brigade des Jouets – the Toy Brigade. Find out all about them here and here. Let us hope the weather stays dry. 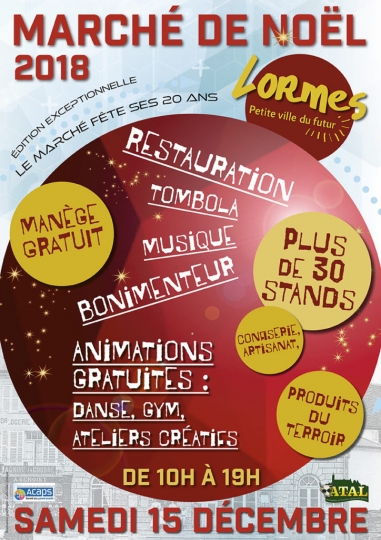 The Lormes market is held in the town square and marché couvert and features a free merry-go-round, many entertainments and a bonimenteur, which my online Harraps translates as ‘smooth talker’. Bizarre! I called the organisers, who explained that their bonimenteur is a cheerful guy who goes around meeting and greeting. 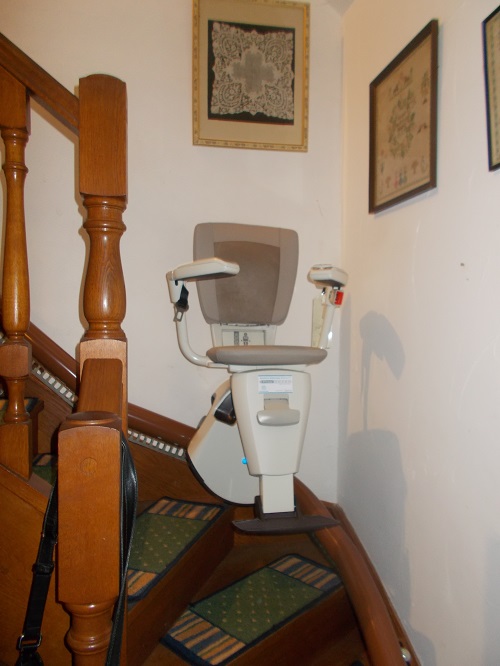 We hope to spend the rest of our days here at Maré, and our long term planning features Accessibility in general. John’s basement den can be reached via the adjoining garage if the stairs become difficult to negotiate, but our library is upstairs, along with two bedrooms and a bathroom, the big linen cupboard and the ironing board. Our new Thyssen-Krupp stair lift was installed last week and I am learning to love it.

There are three télécommandes: one in the hall, one at the top of the stairs and one on the armrest of the stairlift. The pace is sedate, and the stair lift will not start unless the seat belt is fastened.

We have solved the problem of taking an armful of books or bedlinen up and down stairs. I ride up. I send the stair lift down, using the remote control at the top of the stairs. John puts the stuff on the seat of the stair lift and sends the stair lift up. When I have done the ironing we reverse the process.

What shall we call my new toy? Suggestions, please.

When I was young and single I visited a family who owned what was then known as a washing-up machine. They did a lot of entertaining and I admired the way they socialised while their faithful kitchen skivvy took care of the boring stuff. And so, in 1972 when John asked me to marry him, I replied, ‘I don’t want a ring, I want a dishwasher.’

Our Candy appliance from Weldom in Corbigny is the latest in a long line of dishwashers. It performed satisfactorily until late October 2018, when it filled with water, then sulked. Sadly it was out of guarantee. John went through the troubleshooting section of the instruction booklet without success. Our favourite handyman, who had dropped in for coffee and a chat, was roped in with the same result.

We called Weldom, who passed the buck to L’Atelier, their service department in Avallon. On 29 October a technician came and was paid 61 euros to tell us that a small part had failed and would have to be ordered. I have the invoice in front of me as I type.

It was not until 26 November that another technician arrived with the new part. He fitted it, pronounced the machine operational, and was paid 52 euros. That invoice is in front of me.

We entertained friends for lunch – drinks and nibbles, a starter, main course, salad, cheese and pud, followed by coffee. After they left I gleefully loaded the newly repaired dishwasher and pressed the start button. No response. John tried, with the same result. I unloaded the dishwasher and washed and dried everything by hand while John called L’Atelier, who promised to send someone on on Tuesday December 4. No, they could not say what time. Thank God for hot water and clean teatowels.

My grandmother would have snorted and said, ‘If having to do your washing up by hand is the worst thing that has happened to you, you are richly blessed.’ I agree. I just wish we had been able to afford to ditch the dodgy dishwasher and buy a new one.