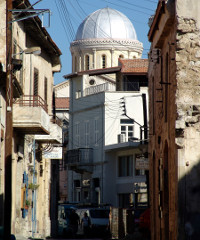 Those who have a certain impression of Cyprus, without having gone there or encountered any Cypriot natives in their home country, might be forgiven for having a partial or incomplete mental image. Most of the news coverage, after all, seems to come from the southern portion of the island, providing a uniform view of the national culture that very much ignores the dual Greek / Turkish nature of Cyprus. To be fair, a full 77% of the island’s population is Greek Cypriot, compared to only 18% Turkish Cypriot, and the division of the land mass is also somewhat skewed in favor of the Greek side – the northern side covers 3,355 km2 of Cyprus’ total 9,251 km2.

The Turkish portion of the country unilaterally declared independence after the 1974 conflict, being known as the Turkish Republic of North Cyprus despite the lack of international recognition for statehood. The duality of Greek and Turkish influence upon Cyrpus’ national character has certainly not always been harmonious, and in fact the violence of the 1970s that resulted in the island’s partition is a topic best avoided – to the extent that it is possible – while traveling there.Nicosia – last of the divided cities

The partition zone is not some military-fortified no man’s land a la the Korean DMZ, and in fact the most populous area of Cyprus rests on this line. The country’s major financial and population center of Nicosia is notable for its being the only divided European city since the fall of the Berlin Wall. Situated so that the UN’s Green Line runs directly through it, Nicosia is comprised of both Greek and Turkish sectors. Prior to the latest Euro-bailout fracas, the city was the 5th richest city in the world when judged by per capita income, and remains the “go-to” destination for anyone wishing to conduct business in Cyprus.

Nicosia’s centrality may be just a little too far inland, though, for those who want to take full advantage of island living and all the opportunities for Mediterranean beach-going that it presents. Areas closer to the sea are also likely to present greater opportunities for those who want to get involved in the hospitality and tourism industries (which, as of 2010, still accounted for 10% of the nation’s total workforce.) The nation’s “second city,” Limassol, scores another major point for the south, in that it is perhaps the best compromise for those wanting both closeness to the sea and closeness to both business and social networks.

Limassol is the nation’s largest port, with all that entails (i.e. at least 60 businesses doing maritime trade), and from which shipping lines to three continents are available. The Cyprus University of Technology, less than a decade old, also exists here as a more hands-on alternative to the offerings available at the University of Cyprus. A significant enough amount of Limassol’s population is of the professional expatriate variety, and is Russian in particular (which brings us to another topic of conversation to avoid – Russian investors’ role in the present banking crisis of the country.)

Advantages of the North

Much of northern Cyprus has had issues with maintaining full electricity for its inhabitants (though blackouts in recent years have become a feature of life for inhabitants of the south, too.) The island is certainly not large enough to experience a diverse array of temperatures from one end to the other, and so both the north and south are prone to the infrastructural problems that can result from meteorological conditions: when the summer heat taxes the air conditioning units of the nation, it places a strain on the power grid regardless of one’s exact location in Cyprus.

These inconveniences aside, as well as the attraction of locales like Limassol, the north of the country is likely to remain the cheapest by far for cost of living and for the purchase of real estate. The latter activity is one that should be entered into with a full knowledge of legal workings in Cyprus, and the perplexing European Court rulings on title deeds. Both the Turkish and Russian investments in the north are helping it to gradually achieve some infrastructural parity with the south (making this a place of interest for anyone involved in construction and urban planning / development), and although a full-blown leveling of living standards island-wide seems a bit of a stretch, the 2012-2013 financial crisis may put the wealth of the north on a more even footing with that of the south than in previous decades.

Naturally, there are other areas of Cyprus to explore in addition to those already mentioned. It is imperative, though, to seek advice on these matters from individuals or groups who can maintain neutrality with regards to the Greek / Turkish divide. Mouthpieces or apologists from either side are likely to paint the opposing side of the island as a place of almost cartoonish un-liveability. Always try to steer clear of opinions from those who have a clear “angle,” and who paint the national situation in absolutist terms.