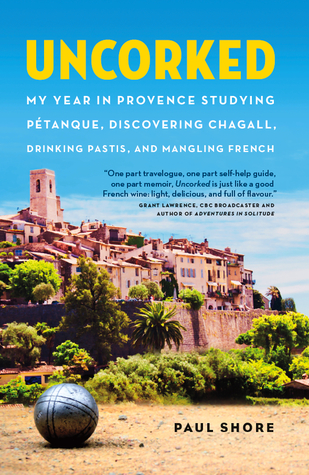 When I first offered to review Uncorked, I did so because I thought it was a book about wine. The author replied that this wasn’t the case, and that he didn’t want me to get my hopes up and end up reading something I didn’t enjoy.

I thought I’d give it a go anyway, because it sounded like an interesting memoir. And it was.The book begins with Shore moving to Saint-Paul de Vence, a small town in Provence where Marc Chagall created many of his most famous paintings.

When he moved to France for work, Shore wanted to live in a place that wasn’t too popular with tourists or other expats. Like many people who move abroad, he wanted to truly experience French culture and understand what life in Provence is like as a local.

And he managed to do just that.

The French have a bit of a reputation for not always being open to outsiders. While on the whole people are tolerated, it can sometimes be difficult to feel like you’re really fitting in. In Uncorked, Shore demonstrates how this apparent stand-offishness can give way to acceptance and friendship, and how showing your willingness to live like a local can make people come to view you as one of them.

The book has a strong focus on pétanque, a French game similar to bowls, in which the goal is to toss small silver balls as close as possible to the bouchon or cochonnet, a smaller wooden ball that defines how the game is going to be played.

Pétanque is a quintessentially French game and speaks to the slow pace of life in the south of France. It is a game played between friends and acquaintances, with its own set of complex rules and its own traditions surrounding winning and losing.

Shore learned to play pétanque from a neighbour, who agreed to teach him even though he wasn’t a local – quite an accolade in itself! Gradually, as he learned about the game and began to understand how to navigate its complex rules as well as its social structure, Shore came to know and love the town he was living in and the people he met there.

Rarely does a book so perfectly capture the essence of a place. Shore doesn’t romanticise the small town he lived in, but at the same time he allows its magic and its strong character to shine through.

Moving to a new place and gradually learning to fit in is a difficult and complicated process. If done right, however, it can open a person’s eyes to a whole new way of living, and have a lasting effect even if, like Shore, you are only there for a relatively short period of time before returning home or moving on to your next assignment.

If you’re thinking of moving to France; if you’d like to understand more about French culture and how the locals interact with new arrivals; or if you’re just interested in reading a good memoir that will transport you elsewhere for a couple of hours, Uncorked is the book for you.

You can buy Uncorked as a paperback or ebook on Amazon, starting at £6.04.