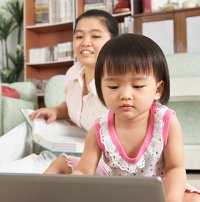 It’s Sunday. Who are the lovely dark-haired, round-faced ladies chattering away at the Star Ferry terminal, in Victoria Park, under the Hong Kong Shanghai Bank? They are women from the Philippines on their day off from duties as amahs, or “little mothers.” One of them could be your new spouse.

Most Hong Kong expats have the opportunity to hire an amah as a live-in maid—and so much more. Apartments generally have a small bedroom and bath, generally off the kitchen. And it is small; the shower may be handheld over a toilet, and you can even buy an amah bed, undersized to fit the tiny space.The amah, on the other hand, becomes a larger-than-life figure in the family, a third parent to the children and a non-complaining wife to BOTH parents. She cooks, cleans, shops, babysits, and runs errands, six days a week, all for the price of after-school care back in the States.

Our experience in finding an amah was problematic, but had a very happy ending. On our apartment-hunting trip in June we interviewed a number of Philippine women. We selected and hired one amah to start working with us in August. When we returned, however, she had taken another position and asked permission to back out of our agreement. We agreed, but it put us in a bind since we would both be starting work within a couple days and had no one to stay with the kids.

So on Sunday we went to another agency on a no-frills middle floor of a building in Central. We passed 20 Philippine women standing in the hallway and entered the tiny office. We talked to a few. One question we asked was if they knew how to cook Western food. We met a few vacant stares and asked, “Like lasagna?” More stares.

After talking to several women, we met Gilda. We asked her if she could cook Western food. Her response was “I can cook lasagna.” We hired Gilda. She was a bit more mature than the others and we thought she could have the confidence to interact with our strong-willed kids. That very night, just a day or so after our arrival in Hong Kong, my husband had gotten tickets for us to see “Les Mis” and we naively left our three children with this total stranger in a foreign country.

A week into her employment I asked Gilda to make lasagna for dinner. She bashfully admitted that she had no idea what it was or how to make it; she had just followed a tip from one of her friends who preceded her in the interviews. We had quite a chuckle. Gilda did turn out to be an excellent cook, able to transform any recipe into a masterpiece. She mastered lasagna. She even made a seven-course dinner of gourmet French dishes when we invited our Parisian colleague for a meal. Our favorites of her cooking were the Asian dishes: perfectly made spring rolls, Singapore noodles, peppered chicken, and so many more.

Many of the amahs are married and have left their husbands and children in the Philippines in order to earn a living in Hong Kong to support their family. They will care for your children every day, but see their own kids just once a year (or every two years) on their home visits. They may do this for a decade or more. It sounds heart-breaking, but somehow the 80,000 or so amahs in Hong Kong make it work. You may hear horror stories of the amah who stole from the grocery money or who had an affair with the husband while the wife and kids went on summer home leave. Most likely these are not true, just urban myths that make the rounds.

When our kids were all in school, we “allowed” Gilda to work for other people during the day so she could earn extra money. She sent most of her earnings back to the Philippines. She had built a two-story concrete home which housed her parents, several siblings with families, a tenant, and a small store on ground level. Each family occupied a single room with bunk beds, a sink, and a small stove. In the rainy season, access to the entrance was blocked by deep standing water and the ground floor often flooded. We visited Gilda’s family and were overwhelmed by their warmth and graciousness.

The Hong Kong government regulates amah employment. Contract requirements specify minimum wage and a mandatory 13th month bonus. (Some unscrupulous employers swap amahs between family members before the 12th month to avoid paying the bonus.) If an amah’s employment is terminated, perhaps when her expat family leaves Hong Kong, she has a limited amount of time to find another employer or must return home. If you know you’ll be leaving HK, you may want to help look for opportunities so your amah is not left in a bind.

A new amah coming to Hong Kong must be requested by an employer. We petitioned the Hong Kong government to let us hire a second amah since my husband and I both did a lot of business travel. It worked and we brought Gilda’s sister to Hong Kong. She stayed with us for several months until she found another family. A couple years later we brought another sister. She spoke very little English, but I still remember her listening to Patrick as he read aloud overdue reading assignments for two straight hours. What patience! She too found another family fairly quickly.

My bottom line is that we would have had a very difficult time without having an amah. Gilda really was a third loving parent for our kids. I would recommend hiring an amah even if one spouse is not working (as long as you’re going to get out and see Hong Kong, not just sit home and watch television). Having an amah is another unique opportunity that Hong Kong offers. Take advantage of it.