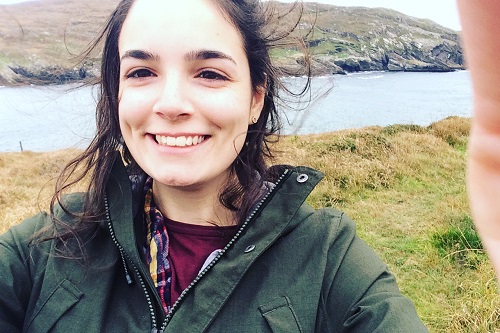 I am an American, raised in New England, and now living in Dublin, Ireland.I love to take photos, doodle, bake, and spend time with family and friends. I also study psychology.

I moved to Dublin in September, 2016. I moved abroad because I fell in love with Ireland at the age of 18, and constantly found myself desperate to return as often as I could. I also wanted to do something different after graduating from college, so I moved to do my Master’s degree in psychology in Dublin.

I think the biggest challenge in moving was trying to find an affordable place to live. Dublin is currently in a rent crisis. Rents are extremely high and the supply is very low. Also, leaving my baby brother was such a challenge!

To be honest, I know there are many expats from all over the world in Ireland, but I’ve never actively sought out other expats. I personally know a few people who have immigrated to Ireland.

I absolutely love that no matter where you are in Dublin, you are never far from the ocean. In south Dublin, if you know which way to look, you can almost always see the ocean in the distance. There are also so many easy ways to be in nature close by, which I really appreciate. Also, Irish hospitality is real. People here are very inviting and inquisitive and it’s lovely.

Sometimes being distanced from close friends back in America can be emotionally challenging. You often get waves of ‘FOMO’ (Fear Of Missing Out, for those who don’t know) and it can bring you down. You’ll see your whole friend group going out together on SnapChat and Instagram and sometimes it hurts your heart a little bit!

Also, I love to bake and a lot of baking materials here have different names or are harder to find than they would be in The States, so I find that I am often very frustrated in the grocery stores here when I cannot find what I need. It’s something that sounds so trivial, but it drives me crazy!

That’s a tricky one. Dublin is so Americanized in a lot of ways, but the culture still remains very unique. One big one that comes to mind is the differences in government and police. The government here is run quite differently and sometimes I find myself surprised about the fact that the police force here doesn’t carry guns.

Also, this may sound weird or confusing, but the nature of the press here is very different. It’s much more straightforward and there are less discrepancies between media outlets. Obviously every news outlet will be somewhat biased, but it’s less drastic here.

Also, a kind of funny one is the way Irish people think about St. Patrick’s Day. In America, it’s often this HUGE thing that people go crazy over. Here, outside of Temple Bar in Dublin, I’ve noticed that a lot of locals just roll their eyes, and have a laugh at how silly the celebrations are, while sipping on pints in a pub that isn’t flooded with tourists. That might not be true for every Irish person, but I definitely noticed it among some of my Irish friends!

A lot of people have this impression that food in Ireland is bland and carb loaded, but I don’t think that is true at all. The food scene in Dublin is blooming and the options are becoming more diverse through the years. I recently became a pescetarian and I find it’s quite easy to get my hands on affordable and fresh produce. Also, the beef here just tastes better because the cows are primarily grass fed and the seafood is so FRESH.

I probably have twenty or so ‘favourite restaurants’ in the city because it’s too hard to choose just one, or even a top three. Dublin is also currently going through what I call a ‘donut phase’ so there are loads of amazing donuts to be had here. My sweet tooth has no complaints about that (though my waistline might)!

For anyone coming to Dublin, I have a few tips.

Firstly, save a lot of money before making the leap over. Rent prices are high, and you may end up paying a fortune your first month of arrival while stuck in an Airbnb trying to find an actual place to live.

Secondly, watch a few episodes of Father Ted (just trust me on this). This show is ingrained in the pop culture of Irish society and it’s good to know what locals are talking about when they quote from the show. A few other shows to watch are the Inbetweeners and Fawlty Towers.

Thirdly, bring a camera and a journal with you. Ireland is STUNNING in its scenery and cityscapes. Traveling around the country is relatively easy because the country is so small. I constantly find myself in awe of the simple beauty in Dublin, but also in the country. You are going to want to remember all of the little details.

Finally, touch up on your political knowledge and current issues going on back home. Irish people are very inquisitive and very knowledgeable about current events and world politics. A random dude in a pub will not hesitate to ask you what you think about Brexit or Donald Trump right from the start of your conversation!

I plan to stay in Ireland for the next few years. I recently accepted a PhD position in a children’s hospital, so that’s what I’ll be up to for now. For the long term? I’m not super set on a single path for my future. Come back to me in ten years!

You can keep up to date with Mckenzie's adventures on her blog, Lady Mac Lifestyle.