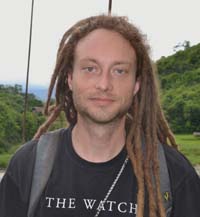 I was born in Brussels in 1980. My interests converged to science during my teenage. Between astronomy, engineering, chemistry and many other disciplines, I finally chose to study pharmaceutical sciences. After failing the second year, I settled for a bachelor’s degree in biology. My thirst for experience in research led me to try out different types of job, from hospital labs to university spin-offs to private companies. I like molecular biology, programming computers, and I love when these two interests meet. I am a musician, and I play drums and bass guitar whenever I can. I especially enjoy meeting new persons who make me change my mind about something, and night-long philosophical discussions with good friends.Where, when and why did you move abroad?

My girlfriend at the time was working in Luxembourg. She convinced me to apply for a position in a public research lab, and after the interview, I too had a job in Luxembourg. At first, I lived in Arlon, in Belgium, just the other side of the border, where the rents are still reasonable, and commuted everyday, adding my small contribution to the huge flow of workers coming to Luxembourg each day. After several years I decided to go back to university to get a Master’s degree. I moved to Luxembourg in 2010 in order to be able to live without a car, to save time with transports, and to be in a more central position, as many of my friends were at the time living in France and Germany. Only for practical reasons.

Finding a reasonably-priced apartment was not easy. Actually, reasonable prices are not an asset of the Grand-Duchy in general, and I soon found out that most things cost way more than on the other side of the border. Of course, tobacco, alcohol and fuel are cheaper for fiscal reasons, but you have to smoke, drink and drive a lot to make up for the difference. Apart from that, no real challenges: the Luxembourg administration is very efficient, as it took only a single visit to have all aspects of the moving sorted. As the country welcomes a lot of foreign workers (40% of the population of the country), they are used to the situation, and it seems that many aspects of everyday life are adapted to the welcoming of foreigners.

The real estate market is poor and totally controlled by agencies, which take advantage of their monopoly: they are expensive and inefficient. Luxembourg has very little alternative housing opportunities like co-housing, and buying a property is an option reserved to millionaires. I ended up in a really nice apartment, but over my budget. There is no need for prospecting in the streets, as everything is online, but it is useful to have a look at the neighborhood before renting a place to get a feel of the place, as districts in Luxembourg-city do feel quite different. My experience with the landlord was not a good one.

I lived in the Kirchberg area for more than two years. There were many expats there, from all over Europe and the world. In the streets you are greeted in many different languages, English is the lingua franca, and virtually all cashiers and desk-persons are highly polyglot and were able to speak to me in French. Elsewhere in the city, one meets easily workers from unlikely countries, and the local Portuguese and Italian communities are lively and very present in all aspects of everyday life. It feels like you are tasting the quintessence of Europe. This was a very rich experience.

The situation in Luxembourg is paradoxical: the language (Luxembourgish) officially upgraded from a local dialect of low-German to a real language only recently. The name of most companies comprises the word “Lux”, and newspapers prefer to report irrelevant news from inside the country than more important news from abroad. This is symptomatic of a feeling, not totally imagined, that their national identity is threatened by the high number of foreigners and the internationalisation of the region. As a result, locals tend to stay together and exclude expats, and this feeling does not disappear after some time, as I had expected.

Luxembourgers are nice, polite, helpful and educated people, they make excellent colleagues, but they draw a line between themselves and the rest without even realizing it. I have rarely been invited to the house of my Luxembougish friends. The worst is that when you say this to them, they have no idea what you are talking about. That is just the way they do it there.

Luxembourg is the safest place on earth. One can walk around at night in the darkest places without any worry. One can forget his expensive smartphone in a bar and come the next day to pick it up. The city is quite and peaceful (except when Portugal wins a soccer game). The high salaries provide everybody a high standard of life, which is very enjoyable at first. As I said above, the administration is very efficient and any fiscal or legal problem is treated within days with high efficacy. Public transportation is great, taking you from anywhere in the country to your destination in less time and with less hassle than if you would use a car (but they shut down at around eleven in the evening).

Luxembourg is tiny. If you miss the exit on the highway, you are abroad. Not much happens in the city and even less in the countryside. There is a limited number of interesting places, museums, or historical places. Around five o’clock, the bars of Luxembourg-city fill up with bankers and financial consultants for their after-work beer ceremony, but at eight most bars and restaurants are literally empty. Not working in the finance industry made me sometimes a stranger even to the expats, who would for example, when I would first meet them, not ask me what I do in life, but in which bank I work. The only concert hall is far from the city center.

The constant feeling to be an outsider does not decrease over time, on the contrary, the sadness of not being able to truly enter in contact with locals grows with years. The atmosphere in the country became for me more and more heavy, I could feel a breeze of fresh air every time I went abroad, in Belgium or elsewhere. In the streets, most people are grey, busy and inaccessible, more than in other European capitals. The weather is even more depressing than in my native Belgium, and the winter lasts forever.

Firstly, know what you are there for. Whether one goes only to gain experience in finance or boost a resume, to make some money, to study, to discover the country or for other reasons, it is important to keep this in mind and take action when the goal is achieved. I found myself in a sort of “what-the-hell-am-I-doing-here” type of situation and stayed in the country for longer that I probably should have.

Secondly, learn the language. Now that I moved again I realize that it is the key to an easy integration in the country and I regret I did not make the effort to learn it, so even if Luxembourgish is of virtually no use outside of Luxembourg and sounds like a made-up version of German, one should learn it and speak it as often as possible. Thirdly, be proactive in your activities, this is not a country where one can go around randomly to check what is going on.

I am now between India and Nepal, studying intentional communities, learning about resilient agriculture, and actively looking for cultural experiences. Maybe being surrounded by so much money and witnessing the effect it has on individuals and myself made me want another type of lifestyle. I work as a freelance translator and proofreader, and I make money here and there on the web. I plan to come back to Europe at some distant point in the future, because I miss my family and my friends, including the very good ones I made in Luxembourg. I aspire to a quiet and meaningful life in the countryside.