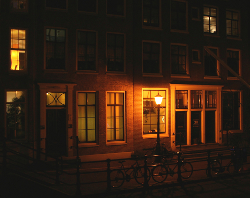 I’ve already written about one of Holland’s well-known vices, the drug culture. There is of course another vice which the country is very well known for. Something that brings a particular kind of tourist to certain shady areas of the country, to indulge themselves in special ways. Yes, you’ve guessed it. I’m going to talk about windmills.

Alright. I’m not really going to talk about windmills. I’m going to talk about the sex industry in Holland. Holland has a very open view towards sex, and prostitution is legal and regulated in most cases. If you want to see just how open the Dutch view towards sex is (or you are on a stag night) you will find no better example than the Red Light District in Amsterdam. It is a network of alleyways containing hundreds of tiny one-room apartments where prostitutes wearing just underwear or bikinis offer their services from behind glass doors. It’s also a place where you can find live sex shows, peep shows, sex museums and shops that sell the kind of toys you won’t find in London’s Hamleys. Amsterdam has the most well-known Red Light District but a lot of towns have their own versions as well. It’s also not unusual to pass a sex shop in the main street of some towns.If you come from a more reserved country, the red light district is the kind of place you have to see to believe. In some ways it is a tourist sightseeing attraction and that is why a lot of tourists go there for a game of Eye-Spy-Ho. Even my parents want to have a look around whenever they visit (at least that’s what my dad tells my mum). I’ve seen other families walking around there too, to see if all the stories they have heard are true. However it is still a sex industry area and has its seedy side. You will often see men lined up outside prostitutes’ doors waiting for their turn, and illegal stuff does still happen.

I had a look around a few days after I first arrived in the country (and I’ve only ever looked). It was a time when I still looked very much like an out of place tourist, so as I walked down one of the alleyways all I heard behind me was doors opening and calls of…

… I just kept on walking.

When my friends come to visit from England they also want to do a bit of window shopping (even the girls), because, like everyone else, they cannot believe it until they see it with their own two eyes. This is how I ended up going to see one of the live sex shows. This might sound very seedy and in some ways it was, but in others it was quite an eye opener. I don’t mean that I finally found out the true story of where babies come from that night. I mean I was surprised to find out the place was more hi-tech than some normal theatres I have worked for in the past. They even had a revolving stage and a lighting set-up which would make most bands envious. Not all the clientele were brown raincoat-wearing men either. Again there were a lot of tourists and couples who just wanted to see the show for the novelty/curiosity factor.

As for the performance itself? Yes, there really were two people on stage having sex and sometimes just a woman alone, with more of those toys that are not stocked by Hamleys. Some of the performers looked very bored as if they were following a script which they had done a thousand times before (which is probably just what it is like for them).

Part of the show was interactive as well. There was the woman who fed a banana to a member of the audience but she was not holding it with her hands or even her feet. There was a scary moment when she almost picked me and a friend out of the audience, but we sank very low into our seats at that point.

If you are ever in Amsterdam, the Red Light District is one of those places you have to see just so you can say you have seen it. However, don’t take any photos unless you want a very angry prostitute trying to take your camera away (cameras are banned in the area).