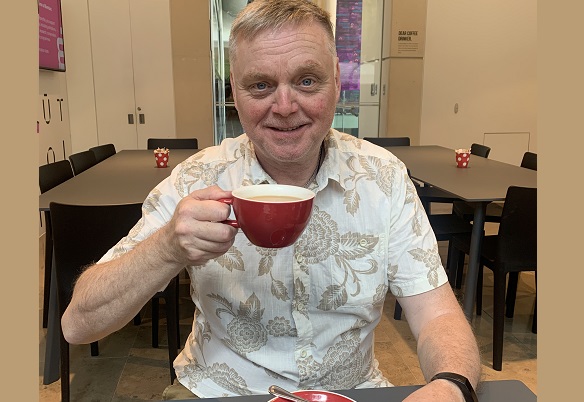 My name is Anthony Brownlow. I’m single and 58 now and originally from Bolton, England, United Kingdom.

I moved from my hometown of Bolton to Napier Hawkes Bay in New Zealand in August 2014. I emigrated after years of thinking and umming and ahhing, after I received a job offer at the local hospital as a children’s mental health social worker. I had once visited Auckland, New Zealand on holiday.

The challenges came thick and fast, waiting for the last few days to receive my workers visa before I left the UK.

I had to book a small hotel room for an undetermined period of time, but they helped me out nicely. My employers were ridiculous. I turned up for my first day of work, and they were all shocked and surprised I had actually come. ‘How brave are you,’ they all cried. They thought I was brave to come all the way from the UK to New Zealand.

Other challenges included stupid legislation and professional body regulations to prove that my BA & MA are equal to the NZ standards – copied from the UK professional bodies! How annoying to be checked and authorised by the police and immigration departments, and to be given a post within a teaching hospital, only to have to rewrite professional body registration documents repeatedly!

Even my employers took this issue up on my behalf. It’s a bit like jobs for retired boys, checking facts already proven by government bodies and more!

The next job was to look for a home! Super shock: the housing market exploded as I arrived in a small town in the country. Population sizes, too. Bolton is known as a large town. I moved to a region with only 120,000 people. The differences are massive – hours of businesses and shops and bars etc. are reminiscent to the UK in the post war years! Shops in the town centre close for half days on Wednesdays or Mondays, and banks, too. Bars closed at 9pm.

There were some expat Brits and Europeans and South Africans in the region. Most said it was pleasant, and mostly safe, but slow living. Most people go elsewhere in New Zealand or Australia or South East Asia for shopping or nightlife or excitement or even medical and dental treatments.

To be honest, I do find most people in NZ to be polite and friendly and interested in you and your experiences. After five years in Napier, I am now in the biggest city, Auckland. It’s very vibrant and has a pleasant buzz. There are about five major cities in NZ, and each varies in style and atmosphere etc.

Another difference is the cost of living here! It is without doubt the most expensive country I have ever visited or lived in. After my seven years here, I cannot afford to buy even a small home or apartment. I have to rent, because the housing prices exploded upwards and rippled outwards throughout every single region of the country. I now pay more in rent per week than I paid mortgage in a month in the UK. The salary levels in NZ are shockingly low at times, and I’m in a professional medical social work post.

More differences are: the lack of competitors in business commerce, shopping, sports, entertainment, etc. There are rugby teams everywhere, and cricket is popular too, but there is only one football team. That is in the capital, Wellington, and they only play in the Australian leagues! So, me being a lifelong BWFC football fan, I miss the action of a country like the UK, with all its history and sport.

The infrastructure is in a bad way, to be honest. Services are expensive. Petrol costs more in Auckland than in the rest of the country, due to a local tax. The scenery is awesome at times, but don’t be fooled. As an example, in January, Auckland declared 50 of its own beaches unsafe to swim in due to sewage pollution! Farm effluent pollution is a massive concern here. The grass is not always greener … unless it’s fertilised.

There are no major manufacturers, other than farming and tourism. There are problems with the country trying to make up for its past with the Maoris, and the government offers their communities massive cash incentives and grants annually. The country is officially a dual language society, with the Maori language being pushed through the school systems.

There is increasingly gang warfare and gun problems in areas and in prisons, too. Drugs and offenders (501s) being deported from Australia are an increasing problem. This seems quite negative, but it’s not that all bad, I’ve outlined some negatives, but I have also said that it’s calm and cheerful. It has the weather of the UK, but the summer is often hotter. Today, it’s 25°.

The government here has screwed up my pension plans by changing legislation, so I cannot have a UK and NZ state pension even after qualifying for both…

I’m honestly looking to retire elsewhere simpler and cheaper than NZ, as my state pension here won’t even cover my rent.