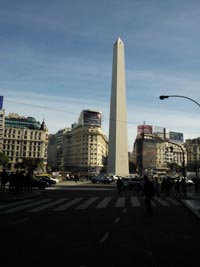 My name is Connor Davies and I’m originally from the UK. Back in 2005 I decided to go traveling in South America, mainly just to see the world and experience new things. Despite great plans to see the entire continent, I ended up in Argentina after just a few months and have been living in Buenos Aires ever since.

Moving abroad was easy for me because I never really thought I was actually moving until I had settled down in Argentina and made a home for myself. Until then I could still convince myself that I was traveling.

When I first arrived I was renting a bedroom in a family house in Buenos Aires. But after a while I wanted my own place and so found a local company which had a list of apartments available for renting for weeks or months at a time.Are there many other expats in your area?

There are lots of other expats in Buenos Aires and there is a very lively community here with lots going on.

After my Spanish improved I made a lot more Argentinian friends, so much so that I now have more friends who are Argentine than are expats. But it took a while to build up a group of close contacts.

I love the Argentinian way of life. The ‘sobre mesa’ where families sit around the table late into the evening talking about anything and everything; the late meals; the delicious steaks. People are very open and friendly here, which makes living here a pleasure.

I also love the fact that I am working in a freelance role so I can move around as I please. I work online so I can take a few months of the year to travel without having to book time off work.

There are a few frustrations about life in Argentina which get on my nerves. Things often don’t work was well as back in the UK (the banks, hospitals, schools, etc), but then this is in many ways a developing country.

As for cultural differences, there are many. Perhaps the hardest thing to get used to was how late they eat in the evenings! Back home I would eat at about six o’clock, whereas many people here do not eat until nine or ten o’clock.

What can you tell us about shopping in Argentina?

Shopping for general items from the supermarket is not so different from back in the UK. However, there is less variety here, so whereas in the UK you can pick up a recipe book and find the exact ingredients that you need, here that is sometimes not possible.

You can order deliveries from any large supermarkets and even many of the small, privately-owned ones, so that makes things easier.

Food prices have been going up lately with the 25% inflation, so shopping is certainly not as cheap as it used to be a few years ago. Clothes are also quite expensive, but there is a good variety of quality shops in the shopping centers.

Electrical goods are generally more expensive than in the UK or US due to the hefty import taxes. It is therefore a better idea to buy computers, smartphones, etc, before you arrive.

For anyone who wants to live in Argentina, I’d recommend getting a job online and earning money this way. Finding work in Argentina is not easy and the wages are often low compared to what you can earn in a freelance role.

I aim to stay here for the foreseeable future and continue to work on my freelance projects as well as on my website, aspirationsabroad.com. However, I do have hopes to travel around South America in the near future and finish what I started all those years ago!