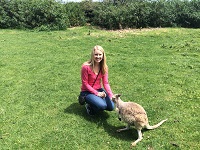 My husband and I moved to Melbourne, Australia in July 2014 for his job at a local University.

We were living in Missouri prior to our move to Melbourne, so we had to move all of the belongings we did not want to bring to Australia to our parents’ houses in Minnesota.Needless to say, it was a lot of moving around before we actually made the big move to Australia.

This is a fun story! We only had 2 weeks to find somewhere to live, so I had done some research on a rental website prior to our move and we decided we wanted to look as close to downtown as possible because we don’t have a car. When we got here, we went to what felt like millions of showings, where the real estate agent would show the property to anyone that wanted to view it in the span of about 15 minutes. It was a very rushed experience, but we found a place right in the heart of downtown. If only that was the end of the story. The day after we moved it, it became clear that the apartment was infested with cockroaches. Long story short, we ended up moving out and into a building not too far away, where we have happily been living ever since! Because of our housing crisis, our first couple of months in Melbourne were pretty stressful!

Are there many other expats in your area? Yes! I have met tons of expats from all over the world, and Melbourne is generally a really diverse city. I feel like it’s pretty easy to blend into the culture and make friends.

At first, I mainly had expat friends. Lately, I’ve been branching out a bit and meeting more Australians, which has been a lot of fun! I have found Australians to be friendly, welcoming, and fun-loving. They also love Americans and have tons of questions about America which I like!

Melbourne is an awesome place to live. The city is clean and safe and there’s always something to do. I enjoy the laid-back Australian culture and the focus on outdoor activities. Where I’m from, there are only a few months out of the year when you really want to be outside, but here the weather is always pretty nice!

I do love living in Melbourne, but at times I miss American culture, and of course my friends and family. It’s hard to be so far away at times. It’s also been hard for me to find a job here, so I’ve been unemployed for longer than I would have liked.

I would say the work-life balance is more pronounced here than what I’m used to. At home, it’s normal to work 40-50 hours a week and that seems a bit more scarce here. One of the biggest things I’ve noticed as well is the lack of religion in Australian culture. There doesn’t seem to be as much emphasis on attending church and as far as I can tell, religion isn’t really talked about.

Everything is so much more expensive! But I do enjoy the number of fresh produce markets near our apartment. There aren’t as many big-box retailers here, either. At home, I can pretty much find everything I’d ever need at Target, whereas in Melbourne I may have to go to a couple stores to get everything I need.

The food in Australia, particularly in Melbourne, is AMAZING. I have never had so many choices and such good quality food readily available. Avocado on toast is really big here and has become my favorite breakfast. The only thing I dislike is that the prices, as with most thing in Australia, are extremely high.

I would say to definitely get out and try as many new activities, restaurants, etc. as possible! And join meetup.com to make some friends, it has worked well for me!

My husband is on a two year assignment, so unless something changes we plan to move back to the States in August 2016.

Laura shares more information about life in Melbourne through her blog, Laura and Peter Down Under.