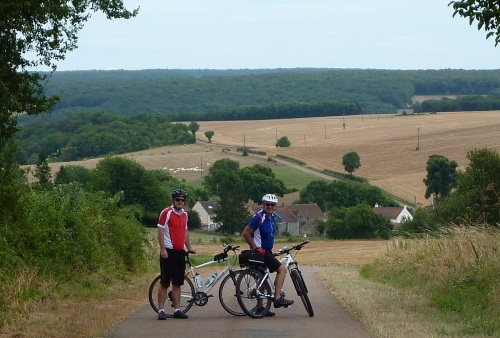 I am typing this on (British) August Bank Holiday, in a sizzling heatwave. Our trees, notably the paulownia adjoining our patio, are shedding their leaves. When the paulownia flowered for the first time in 2015, I emailed Carmela Delcros, who had planted it as a tiny sapling when she and Georges built the house 22 years ago. No flowers this year, but we collect a barrowload of handkerchief-size leaves daily.

Was there a Paulownia in the Garden of Eden? Carmela also planted a fig tree…Mind you, the fig leaves in Paradise Lost (A Level English 1960) outdo our paulownia.

Those Leaves
They gatherd, broad as AMAZONIAN Targe,
And with what skill they had, together sowd,
To gird thir waste, vain Covering if to hide
Thir guilt and dreaded shame 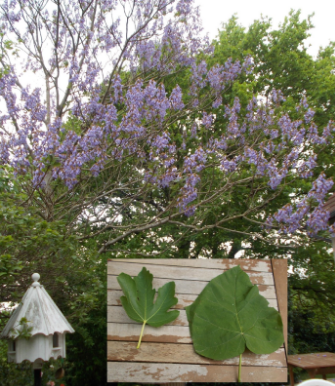 Our paulownia in flower, fig leaf and paulownia leaf

What did they sew with? There must be a PhD thesis there.

Bank Holiday could translate as jour férié, of which August 15 is one. I asked around when we first arrived here, and was told it celebrated the Assumption into heaven, body and soul, of the Blessed Virgin Mary.

Human beings have to wait until the end of time for their bodily resurrection, but Mary's body was able to go straight to heaven because her soul hadn't been tainted by original sin.

For a nation priding itself on its laïcité – secularism – France has a great many religious holidays, not to mention calvaires by the roadside. Here is the calvaire at Maré le Bas. 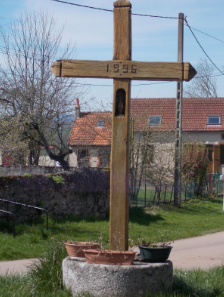 A 2004 BBC report explains how France became a secular nation and describes the problems this poses, notably to French Muslims.

Secularism is the closest thing the French have to a state religion. It underpinned the French Revolution and has been a basic tenet of the country’s progressive thought since the 18th Century.

Since then a new word has swum into our ken: burkini or burqini. Type burkini in your browser for hours of innocent merriment.

A burqini (or burkini; portmanteau of burqa and bikini) swimsuit is a type of swimsuit for women, designed in Australia by Aheda Zanetti.[1] The suit covers the whole body except the face, the hands and the feet, while being light enough for swimming. The design is intended to accord with Islamic traditions of modest dress. Zanetti's company Ahiida owns the trademarks to the words burqini and burkini, but they have become generic terms for similar forms of Islamic swimwear. In 2016, a number of French municipalities banned the use of burqini, which sparked an international controversy.

Digression: A favourite word of mine is eponym, a generic term of which burkini/burqini is a very recent example. My favourite French eponym is poubelle. The guillotine, invented by French physician Joseph Ignace Guillotin (1738-1814) cut short a great many lives. Eugène-René Poubelle (1831-1907) benefited public health by introducing the dustbin to Paris.

In a Guardian piece Aheda Zaneti explained why she invented the burkini.

The dispute reached France’s highest administrative court, which has ruled that “burkini bans” being enforced on the country’s beaches are illegal and a violation of fundamental liberties.

Burkini sales are booming. Ahiida has sold 700,000 since 2008. Apparently some customers include non-Muslims who are looking for ways to shield their skin from the sun.

Here in the Morvan, several hours’ drive from the sea, we swim in our many lakes and nobody seems to mind what we wear, but we have the media to keep us up to date…

Keith, son Simon and son-in-law Jim came to Charity Cottage in mid August. They brought bikes on the roof of their car, and Burgundy Secrets, Walter Judson Moore’s guide for cyclists. which to our delight included many pictures of our favourite places.

Keith will spread the word about Charity Cottage, which he considers ideal for cyclists.

I do not do social media, but my daughter-in-law in California now promotes Charity Cottage on her blog, and we need all the publicity we can get. I do not feel comfortable about baring my soul to complete strangers. Expat Focus readers do, however, know a great deal about John and me from my various effusions. They may therefore share my amusement at a letter I received recently from Elsan, the outfit that runs the Polyclinique at Nevers. I find it difficult to take seriously an organisation that calls itself Elsan. I looked them up, and here they are.

Someone ought to tell them that Elsan is one of those unfortunate names which mean something different in another language: remember the Vauxhall Nova? No va (this car does not go) is hardly a recommendation. John has reminded me that Durex in Australia is an adhesive. I feel another digression coming on, so let’s change the subject.

We would attract more Combat Stress clients to our cottage if the charity would offer small travel bursaries to deserving people, using the UK royalties I have gifted to them. John and I pay French income tax on all our UK earnings, but a few of my published works still generate royalties which are not worth declaring to Le Fisc. The simplest option was to donate the rights to Combat Stress and let the taxman add Gift Aid. Combat Stress are grateful, of course, but their accountants have said No to my notion of travel bursaries, and my royalties are swept into the central pot. Sigh.