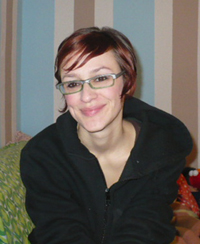 I am an American who has been living in the Balkans for 6+ years now (after this long, you stop counting). To the surprise of many, I do NOT have roots from this area. I am pretty much as American as you can get without being a Native American – meaning my ancestors came over to the “New World” well over 100 years ago.

When people ask me where I am from, I am not really sure what to say. My family moved around a lot in New York State (i.e. not the city) and then to Ohio. When I was 16, I finished high school a year early and moved to Philadelphia on my own. I eventually went to college there as well and have a Bachelors of Arts degree in Sculpture.Where, when and why did you move abroad?

Even though the US is my home country, I’ve never really felt at home there. Even as a young child, I remember having feelings of being an outcast. So, I guess that is the real reason that I moved abroad: the Balkans is the only place I have ever been to where I really feel at home.

Of course, I didn’t know I would feel at home in the Balkans. I already had some European travels under my belt when I was first introduction to the Balkans. At the time, I was working in an alternative video store which happened to have a section dedicated to Yugoslavia. I found a film by the director Dusan Makavejev called Sweet Movie. It blew my mind! That same year, I was also introduced to the performance artwork of Marina Abromovic.

If you aren’t familiar with those two, I highly recommend checking them out. They are the epitome of dark, edgy humor that visceral emotion that I’ve come to associate with the Balkans. Anyway, after seeing work from the both of them, I said to myself, “Where did this come from??? I’ve got to go there!”

My first Balkan trip was to Belgrade in 2005 and I fell in love with the country and people. So, the next year, I decided to explore more of the Balkans. Rijeka was on the top of my list because the punk-anarchist bar I liked to go to in Philadelphia happened to be called Fiume. Fiume is the Italian name of the city Rijeka. The reason the bar was named after the Croatian city was because Rijeka used to be an anarchist state for a couple years after WWI. It is actually the longest-lasting anarchy in modern history, but that is another story…

In 2007, I finished university and decided to move to the Balkans. I lied to myself and said I was moving to Ljubljana – which would have made practical sense because Slovenia is economically stable and a great place for artists. But, I must have really intended going somewhere else because, before my departure, I bought the “Teach Yourself Serbian” book instead of the “Teach Yourself Slovenian” book.

When looking back, I know the real reason I moved to the Balkans was because I didn’t want to lose my soul. If I’d stayed in the US, I would have turned into a machine: working to buy stuff I didn’t need, drowning out my brain with TV, and never seeing my friends or family…

I really didn’t have any problems during the move. So long as you make an effort to assimilate to their culture (speak the language, etc.), the local people are so helpful and nice. I remember sitting in a café and trying to make sense of the classified ads for apartments. Some random guy saw me and immediately offered to help me make the calls and even got me a mobile phone too. The *BIG* challenge I did face, though, was working in bar – even though I barely knew the language yet! My boss was very mean and would yell at me every time I made a mistake (and I made lots of mistakes!). On the plus side though, that was a really good way to learn the language! I never made the same mistakes twice and mastered Croatian much faster than I would have with any course. Apparently, Croatian youth are pretty lazy so it was surprisingly easy for a foreigner who barely knew the language to find a job in a bar.

I wasn’t even planning on going to Rijeka. I was actually on my way from Ljubljana to Zagreb to see some friends. But I was hitchhiking and it was raining. So, I decided to stop for a coffee and then decided to stay the night in a hostel. The hostel cost 10 Euros. Then I found out that I could rent an entire apartment for 100 Euros. So, I got the classified ads and started looking for a place.

The first place I found was actually pretty terrible. It was ugly and far from the center. Luckily, I only stayed there a month. I met a really cool girl at an art opening who happened to be looking for a flat mate. We lived together for the next 6 months.

Compared to the rest of the coastal areas in Croatia, there really weren’t too many expats in Rijeka. The city is rather industrious (i.e. ugly), so it doesn’t draw in expats like places in Istria and Dubrovnik. I’m sure there are plenty of expats in Rijeka too; I just didn’t come across them because of my rather alternative style of living. I did, however, meet a lot of Croats who had lived abroad and come back home. This is probably because I tend to hang out with artist types and many of them are well traveled.

One of the problems that expats in Croatia may have is this: they immediately assume that you are wealthy and look at you purely as a business opportunity. This makes sense considering how much of the Croatian economy on the coast is dependent on tourism (and they do get a LOT of tourists!). Once people realized that I was living a “normal” life, they treated me a lot differently. I was working in bar as a waitress and at another bar as a barwoman, so people did find it shocking that I’d come from the US to work such a crappy job.

There is something magical about the Balkans which allows you to live well off of very little. For example, when working in the bars, I would somehow spend 2 or 3 times as much money as I was making. Yet, I always had a bit left over for coffee and bread. How is this possible? I have no idea – but all Balkan people will tell you it is. (Ironically, I actually have a good paying job now and the magic money has disappeared. I guess the magic only occurs when you don’t make much.

What I like most about Croatia and the Balkans in general though is this: people have got their priorities straight. First comes family, then friends. Then somewhere down the line is your job. They aren’t like the Americans who define themselves by their jobs and let it consume their lives. Croats are also very gregarious people and love to laugh and joke around.

The only thing that I really didn’t like about living in Rijeka is that it is a small city, so everyone knows each other. This can be a good thing because you don’t have to call your friends and make plans to have a coffee. If you feel like drinking a coffee with some company, you just walk through the center or go to your favorite café and you will stumble across a friend. But, this small-city closeness is rather annoying if you are used to privacy or want to be alone. Everyone knows each other’s business and they gossip incessantly. Croats are also very jealous people. The moment they think you have more than they do, they will try to rip you off or take advantage of you. If they think you have less than them though, they will be the nicest, most helpful people on earth.

I realize that most people aren’t going to follow in my footsteps – at least as far as the hitchhiking and lack of planning goes. So, here is my advice for the more typical expat: be respectful of the culture.

Right now, the Croatian coast is being taken over by expats. I was even visiting a small village in Istria with just 200 people living there and came across expats! My friends there were infuriated that they had to speak English in their own village. If you make the effort to adapt to the culture, like speaking the language and not flaunting your Western income, then you will be welcome with open arms. If not, then you will be relegated to hanging out with other expats.

I have since moved out of Croatia and live in Belgrade. I like it here because it is a big city, which means lots of happenings and more diversity. It is also a lot cheaper than living in Zagreb would have been. It is also a lot more chaotic than Zagreb though (which I like). I now have a 3-year old daughter and am pretty much settled in my life, so I doubt that I am going anywhere too far away. In the next 5 years or so, I’d like to purchase a small house in the outskirts of Belgrade. As for other plans, I’m slowly building up an online business and meeting my goal of going on at least 2 vacations a year.