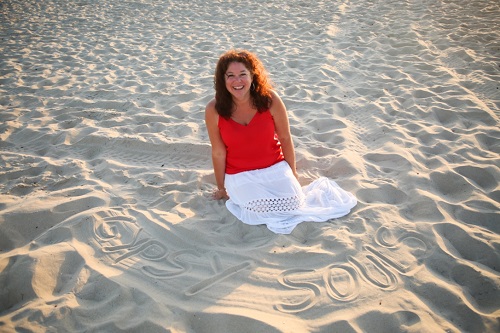 Thérèse Lafleche, a mother of two, wife, and gypsy soul.

Born in Canada, I have had a strong sense of wanderlust since the age of 16 and first remember wanting to travel when I was six and saw a globe in my uncle’s office.

I am also the founder of Passport Lifestyles. I used to offer language and cultural retreats in Canada, the USA, France, and Germany, but since the pandemic, I have had to re-create my business, as so many of us have.

I now have a membership group where I share all things France. Taking people beyond the brochures and getting them to discover the country that is often reserved for locals.

This sometimes includes the French themselves discovering a different area or possibly just the history behind a site they drove past on a regular basis but were unaware of the significance.

All well as hidden gems and secret beaches, we also go over the language, traditions, and, of course, food and wine.

Where, when, and why did you move abroad?

I was living and working in Florida at the time, and one of my colleagues introduced me to his brother-in-law, a German that was living in France.

We fell in love and travelled back and forth for a year. I spent vacations in France, and he came to Florida for a couple of months.

I had always dreamed of a house in the French countryside, since I was a little girl, and so, when it came time to decide on just one location, France made sense.

The idea of going back to Canada had come up, but I’d already had that experience and was ready for something new.

I had moved several times but always within the same continent. Now there were many more logistics to take into consideration, and not having done it before, there are simply things that you don’t even realise you don’t know. So, it’s literally impossible to look into them or, better yet, take care of them.

For instance, the rules and regulations in one country are not necessarily the same in another, and you have to make sure you follow both at the same time when moving.

I had two dogs at the time that would be moving with us. We got all the information of what was required by France in order to bring them into the country.

We were all set to go.

My daughter and I landed in Paris on schedule, but the dogs did not.

Turns out, the United States was not happy with one of the stamps and so detained the dogs in New York for three days.

Frantically, I called JFK Cargo to find out why they had detained our dogs. I was told that I had to pay someone to take them to the vet for an additional stamp. They would then have to spend three nights in their boarding due to the conflicting dates.

We were heartbroken and worried about the poor dogs. What were they going through? What were the conditions? Were they traumatised?

On top of all these concerns, it ended up costing us an additional $360.

We moved to be with someone, so that was the easy part. We moved in with him.

When I first moved to Toronto, I saw my house online on a real estate page and purchased it before visiting in person. I definitely don’t recommend that and will never do it again.

When I moved to Florida, it was actually the result of a long weekend, and I fell in love with the palm trees and proximity to the beach. By the end of the long weekend, I had a job and a vehicle, and had visited a handful of houses. We got our visa and moved five weeks later.

When we first arrived in France, we were living in Maisons Laffitte, which is near Paris and filled with expats. There is an international school there, so in the first few months, we got to know my husband’s friends, and everyone else was an expat.

We later bought an 11th-century watermill in the Loire Valley, and in the six years we were there, I only met a handful. I had already been in the country for a few years, so was well integrated.

That said, it is always music to the ears when you hear someone speaking your native language. Someone that has a similar sense of humour and understands you in a way only someone from your homeland can.

We are now in Bretagne and there are plenty. I have friends that are British, American, and Canadian. I also know of a very large German population, which we look forward to getting to know.

I would say fully integrated.

We only bought our house in Bretagne this past July, but we were lucky, and it was during the few months of no confinement.

This gave us the opportunity to meet the neighbours and invite them over for a cocktail evening.

Then it was my husband’s birthday in September, which gave us another opportunity to invite the neighbours, as well as the other people we had met, for an outdoor birthday party.

My husband is in real estate. We have a 10-year-old boy and a puppy, and I kept my Canadian ways of smiling and talking to everyone, so with all this combined, we create daily opportunities to meet new people, and sometimes those people become dear friends.

I have always found that if you are friendly, open, and wanting to integrate, then it is very easy to make friends wherever you are.

Even when we lived in Germany and I had a language barrier, we still entertained and got invited to various events on a regular basis.

Everything. I discovered, when we were in Germany from 2014 – 2020, that France is really where we belong.

For both my husband and myself, this is the country that best suits our personalities.

We love to entertain and love food, so being in a country where social events roll out around food and wine is perfect for us.

There is an appreciation for life and enjoying things here that we really enjoy. You work to live and enjoy life and not the other way around.

We are also steps from the ocean, so we feel like we are on vacation all year. When we travel, it will be to discover a different culture, visit family or go to Italy for some ice cream … that type of thing. But we don’t need to get away to relax, and that in itself is a gift.

Being away from family. My mother has Alzheimer’s, and I used to go to Canada at least three times a year to be with her. Now, with the pandemic, it has been 14 months since I have seen her.

We do a video chat once a week, and I speak with her on the phone, but it isn’t the same thing.

Before the pandemic, I would have said there was nothing that I disliked about expat life. However, like many other things, the pandemic has changed that.

The size of the roads and parking spots :-).

When we first moved, we had the honeymoon phase, as all expats do. Three months of absolute bliss, discovering so many fun and exciting things.

Then the fact that everything closes in the evenings and on Sundays was inconvenient, until we learned to change the way we do things.

Not being able to go to the restaurant at any time of the day took some getting used to as well. We would go out and be having a good time, and if we had had a late breakfast, then by the time we thought about stopping for lunch, everything was already closed.

The driving as well. I still, to this day, cannot believe that when I asked for a French driver’s license, I simply had new pictures taken and did a trade. My then American driver’s license handed over for a French one. No learning the rules of the road. THEY ARE DIFFERENT!

Take time to do a little research on what your new life will be like.

When are the stores open? What is the school system like? How do they entertain?

We assume the food, language, and politics will be different, but we often assume that our daily routines will remain the same, but that is not always the case, and sometimes that’s the hardest thing to get used to.

Also, make sure you learn the country’s etiquette. While learning the language of your new home is great, I would say it is even more important to learn what is socially acceptable and what isn’t.

I am not saying to become a people pleaser and do things differently, but you are in a new culture now, so be respectful and adapt to it. Don’t expect them to adapt to you.

To enjoy our life in France and finally set roots in our little corner of paradise.