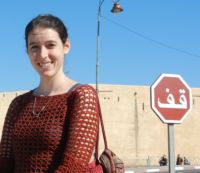 I am a teacher in Casablanca, Morocco, and am finding my way through what you might call my freshman year of life. I just graduated from college in the US, and am now living in Morocco for the second time, after having previously spent six months there as an exchange student. When I am not teaching English, I enjoy exploring Morocco, learning about other cultures, and trying to cook new kinds of vegetables. I will be in Morocco for at least the next two years, and document any interesting discoveries on my blog “We’ll Always have Casablanca”.Where, when and why did you move abroad?

I’ve been in Morocco for a total of eight months, though not consecutively. I lived in Rabat for two months when I was studying at an Arabic school and in Ifrane for four months when I enrolled at Al Akhawayn University as an exchange student. I wanted to learn Arabic and have the experience of enrolling at a foreign university instead of traveling with a group of Americans. I then went back to Chicago for about eight months while I finished my final semester of college, and then came back here because I loved it so much, and couldn’t imagine myself living anywhere else! I’ve now been in Casablanca for four months, where I teach at an American school.

It was a whole lot harder the first time around. It took a long time to find close friends and settle in. Last year, I was really interested in learning about Moroccan culture and Islam and in traveling around the country as a tourist, but now I’m more focused on work and on feeling at home here. It’s certainly been difficult to adjust to teaching sixteen young children every day, but that’s true anywhere in the world! In terms of daily life, it’s possible to find pretty much anything in Casablanca, from my usual cosmetics to several varieties of chocolate chips, so it hasn’t been too difficult to adjust in that regard.

Yes, though most of them teach at the same school as me. I’m lucky to have some friends from Al Akhawayn University in addition to my circle of friends from my job. I spend time with work friends on weekdays, and travel to another city to spend time with my best friend on weekends. It’s great to have a break from talking about teaching!

My favorite thing to do is shop for vegetables, but perhaps that doesn’t appeal to everyone! I love cooking, so I like to explore new kinds of produce and new brands of foods. The beach is also nice, and there’s a lot of it. Shopping is pretty good, because you can go to outdoor markets and get cheap, low quality goods, or go to the mall where there are lots of designer stores…although that’s more for window shopping! There are also many religious traditions to discover, such as church services of many kinds, Sufi ceremonies, and the biggest mosque in Africa. There are a lot of things I like about Morocco as a country, but right now I think I’m happiest about the relationships I have here. And maybe also about the vegetable seller on my street that occasionally gives me free mystery vegetables.

It’s kind of hard to walk around in Casa or go for a run because it’s dusty and dirty, the sidewalks are broken, and motorbikes whiz by way too quickly. I still walk pretty much, but I do wish it were a little more pleasant!

I think the biggest difference is actually the culture at my workplace. The other expat teachers are almost all Americans who went to small colleges in what I would consider to be in the middle of nowhere (Kentucky, Nebraska, etc.) which is a bit of a shock after having grown up in the big, diverse city of Chicago!

Be open to Moroccan culture and don’t be afraid to plunge in! For the most part, people will be willing to talk to you, especially if you can speak some Arabic or French. Remember that as in any place, there are really wonderful aspects of the culture and the city, but there are also problems you’ll have to deal with. And to really get an idea of what it is like, I highly recommend reading my blog We'll Always have Casablanca.