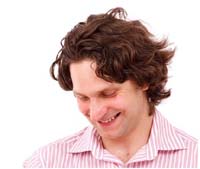 I am an Englishman who has been living in Buenos Aires for the best part of five years. Over the past decade or so my travels have taken me from Australia to Argentina, Botswana to Brazil, and Namibia to Nepal, among other places. During this time I have worked in sports shops and offices, as a football coach and children’s entertainer, in bars and restaurants, and as an English teacher and a freelance writer.

Ever since watching Diego Maradona cunningly and ingeniously defeat my home nation and then inspire Argentina to win the Mexico 1986 World Cup, I had a burning desire to visit the country; some 22 years later that dream became a reality.Where, when and why did you move abroad?

I first moved abroad in 2001, when I went to Australia with a working-holiday visa in hand and the idea of setting up home; needless to say, the holiday took preference over the working. Following this, I spent four years living in Copenhagen and then seven to eight months in Cape Town.

I moved to Buenos Aires in 2009 to live with my Argentine girlfriend. We met in South Africa and then lived in England briefly. We then devised the grand scheme of testing the boundaries of our relationship by travelling to India. It was a success.

At the end of the India trip we took the mutual agreement to give Argentina a shot, based on the idea that it would be easier for me to move from a countryside village to a big city than vice versa.

Moving to Buenos Aires wasn’t the most difficult move that I have done as I’d already been through the process three times before. I had also visited Argentina on two previous occasions so had a decent idea of what I was getting myself in for. That said, living in a country is a different story to being there on holiday.

One of the biggest challenges this time around was convincing family and friends that it was the correct move to make. To them Buenos Aires was more of an unknown quantity than everywhere else that I had previously been.

To date I have had a fair share of luck when moving to a new country: family in Australia, friends in Copenhagen, and employer help in Cape Town.

I had few contacts in Buenos Aires but I did manage to arrange somewhere to live before arriving. On my previous trips I had rented an apartment, so when I knew that I would be coming back I made inquiries with the landlord about a long term rental agreement. I moved in one month after arriving and have lived in the same place since. During the one month that I was not in the apartment I split my time between the couches of acquaintances.

When I first arrived I was aware of a community of expats but would not necessarily come into contact with them on a daily basis. While the city has long been a popular traveller destination, it would still be a novelty to hear a language other than Spanish on the street or in the supermarkets.

Nowadays there is a constantly-growing community of expats living in Buenos Aires, most of who seem to be students from the U.S – I give this community the widest berth possible. There is also a large community of English teachers (TEFL) as the demand is huge.

I like to think that I have a good relationship with Argentines – whether the feeling is mutual is a different matter. There is always a ‘love them, loathe them’ feeling but on the whole I find them to be extremely hospitable. The ones I have had the fortune of becoming friends with have been nothing but helpful, particularly in the early stages when I was learning the local language and trying to adapt.

Expats naturally tend to socialize with each other, which is often their downfall as the never truly get to grips with a country’s culture. It works for some but, in my experience, those that become bitter are those that fail to integrate.

In brief: siesta hours; late opening times of bars and restaurants; parrillas (steakhouses); constant TV football coverage; football pitches on seemingly every street corner; great climate; live music; the wine; the architecture; public holidays; cheap public transport; the ability to get anything you want at almost any time of the day.

Argentines are extremely sociable, which is great if you too are sociable. It is always great to see men/women in their 70s and 80s going for dinner at midnight, usually after an evening at the theatre. I like the passion of Argentines, also. Whether it is football, politics or the latest celebrity scandal, they always put their opinions across with enthusiasm.

Although it may appear hectic from the outside, I find the lifestyle in Buenos Aires to be easygoing, which suits my personal traits. Finally, I like the entrepreneurialism that exits in Buenos Aires and the ability of both Argentines and foreigners to take advantage of opportunities.

The inability to jump on a plane and be in my home town in a couple of hours. With a 15-hour flight to Europe, any trip home from Buenos Aires needs to be planned in advance. Being away from family and old friends is difficult, but you learn to adapt.

I live in Buenos Aires by choice so prefer not to focus on dislikes and negative aspects; however, the following are small gripes: unnecessary queues – most notably in supermarkets, banks and the post office; incessant use of car horns; listening to expats complaining about ‘things not being as good as they are at home’; the growing expat community; inflation.

Don’t hesitate. It is always better to try something and fail (or dislike it) than to spend a lifetime wondering what could have been. Specifically for Argentina, I recommend learning the language as soon as possible as the ability to converse with locals will open up new avenues. Try to arrange a job before arriving, and give yourself a few weeks to get settled into the country before starting.

Have some savings to fall back on in case you need a quick exit or find yourself unemployed. Savings will also help counteract the country’s notorious inflation problem – your budget for one month might only cover 75% of the next.

I have never been one to make long-term plans, but as this is the longest I have stayed in one place in the past decade then I see myself hanging around for a while longer. As much as I love my home town, I do not see myself returning to live there. Nonetheless, should the right opportunity arise then naturally I would give it serious consideration. Life in Argentina is shrouded in mystery, so you have to take each day for what it is, which is how I plan to continue.