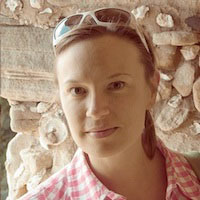 Hi, I’m Lauren Kicknosway, an American expat living in Sydney since 2008 and owner of Sydney Moving Guide where I write and curate articles specifically for people moving to Sydney, Australia from all over the world. Sydney Moving Guide is exactly what I was looking for back in 2008 when we deciding to move to Australia even though we had never been.

Since launching SMG in April of 2013, I’ve built a network of migration agents, recruiters, shipping companies and other Sydney expats that contribute to SMG regularly. The best part is meeting expats face to face in Sydney that have used the site to help them with their move. I get personal emails from people everyday full of questions about their move to Australia. It’s the best feeling in the world being able help out others and decrease the stress of an international relocation.Believe me, I know, I’ve lived through it and survived. So will you!

Back in 2007, my husband was contacted by a recruiter from an American company located in Sydney. After several interviews and lots of debating on our part, we finally decided to take the leap in 2008 and make the move down under.

Thinking back on it now it’s hard to believe we took so long to commit. We wrote up a Pros and Cons list and everything. Now I can’t even remember what those Cons were.

Moving house, even within the same city, neighbourhood to neighbourhood, is a pain in the butt. Moving internationally is 100x worse. Interviewing shipping companies, deciding what to take and what to leave behind, packing up boxes to be ship half way across the world was a completely overwhelming task.

Staying organised so that everything that needed to be done got done on time and keeping up our motivation so that we didn’t procrastinate and put things off to the last minute was probably the biggest challenge during the actual move. Breaking down everything that needs to be done into smaller, more manageable tasks is important.

Going room by room and first deciding what was going and what was not helped us get a handle on how much we were shipping. At the time we thought we were being brutal with our decisions of what wasn’t being shipped. It felt like a massive purging of everything we owned from furniture, small kitchen appliances to shoes, clothes and books.

Even so I couldn’t believe what we actually ended up packing. While unpacking one of the kitchen boxes in Sydney, I came across a roll of paper towels. Paper towels! Like they don’t have paper towels in Australia. Geez.

Finding a place to live in Sydney was an eye opening experience. We had never been to Sydney before so had no idea what suburbs to start looking at. The one thing we did know was that we were going to have to rely on public transportation to get around the city. We used the train route to start researching Sydney suburbs. We figured we wanted to be a 10 – 15 minute walk to the train. From there we narrowed down our search to three suburbs then just focused on those areas.

As it turns out, this system worked out great for finding a rental in Sydney because real estate agents only show rentals for about 15 minutes and at various times during the week, like Tuesday from 2:15pm to 2:30pm.

By focusing on just a few areas and sticking close to the train we were able to get from one showing to another without needing to rent a car, though there were a few times we did have to jump in a taxi but not often.

Sydney is full of expats from all over the world. Walking down the street you’ll hear people speaking Italian, Chinese, Portuguese, German, French or just about any other language you can think of. The best part is that each culture adds to Sydney making it a truly international destination. My favourite is all the different festivals and varieties of restaurants from Brazilian Barbecue to Yum Cha. I swear I’ll never get tired of dumplings.

Sydney-siders are incredibly accepting of all the international expats and completely at ease with making new friends and sharing their city. There are a large number of Sydney-siders that start out as expats with a temporary visa that become Australian citizens later. Australians also travel a lot and often have experienced living overseas themselves so they understand first hand what it feels like to be an expat.

Life in Sydney is good. Sydney has that perfect balance of international metropolis and easy going, laid back beach bum. It’s a winning combination.

It’s hard to not miss home. Australia feels so far away at times. Even though it’s so much easier now to stay in touch with friends and family, the time difference often feels monumental. But it also make it that much more fun when visiting home or when people come to Sydney.

The cultural differences between Australia and the United States are not as pronounced as between other cultures. This has made settling down much easier for us than for those from other parts of the world.

One thing that has come up again and again is the preconceived ideas about Americans which I’m always happy to change as people get to know me.

Sydney is expensive. Not just clothes or going out to eat but everything is more expensive, like paperback books which you wouldn’t expect. I still get sticker shock when eating out and a Coke cost $3.50. Of course, now I don’t really drink soda anymore which is a good thing.

Sydney has a vibrant foodie culture and they take their coffee seriously. Trust me, being from Seattle, I can’t tell you how many times I’ve heard from an Australian how terrible Starbucks is. And their right, the Starbucks in Sydney really doesn’t compare to the Starbucks back home. I’m not sure what it is.

Sydney has some of the best restaurants in the world but you don’t have to spend a fortune to eat well. Be open to try everything. If you don’t like it, don’t go back.

1. When it comes to shipping your household, less is better. Down size as much as possible. We went from a 3 bedroom house in Seattle to a one bedroom apartment in Sydney. Even after our shipment arrived, we had to do another purging just so everything fit in our new apartment.

2. Reach out to other expats either through meetup.com or expat groups on Facebook. You can join these groups before you arrive in Australia. Your best resource is going to be other expats who have already made the move down under.

3. Be patient and enjoy the differences in culture. Being patience will help you ease into life as a Sydney-sider. Yes, there are time when you’ll be frustrated but the longer you are in Sydney the few of these moments there will be.

4. Travel as much and as often as you can. See the country not just the areas you already know about like The Great Barrier Reef but be open all the other spots between. Find out where Australians go and what they recommend. Trust me, your Aussie Travel Bucket List will be full of place you had never heard about before but can’t wait to see.

One thing I’ve learned from moving to Australia is to not have to many plans for the future. I do my best not to plan too far in advance that way I’m open to what comes up along the way. What’s life without a little adventure.