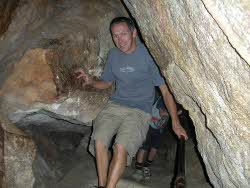 My name is Nick Jay and I come from Norfolk in the UK. I first moved overseas in October 2006 to Berri in South Australia. It’s a lovely little town in the heart of the Riverland about 3 hours from Adelaide. This was not our first choice but it was the only opportunity open to us so we decided to take it as we felt everything was going to be an adventure whether in WA or SA. My wife and two boys joined me 3 months later.

We spent 10 months in Berri and loved it. However I still needed permanent full time work for my visa. I migrated on the sir 495 visa which gave me three years in Australia. To be considered for permanent residence there were certain criteria that I had to meet one of which was to be employed full time. It had always been my intention to get permanent residence so when I was offered a chance of full time permanent work in WA I took it. Funny thing is it was where we originally wanted to move to in the first place because we have friends in Perth.We spent 5 months in Narrogin which is just over 2 hours from Perth but very remote in the sense that Perth was the nearest shopping centre. We didn’t settle well in Narrogin and I got a job transfer to Australind, a small town on the coastline an hour and a half from Perth. Been there ever since – everyone likes it and I don’t see us moving for quite some time.

We moved to Australia because we became very disenchanted with life in the UK. We wanted a more outdoor lifestyle and a better quality of life including warmer weather! Plus the fact that we have friends and relations here in WA helped to sway our decision of where we moved to.

The whole migration process throws up so many challenges it’s difficult to work out which ones were the hardest. Moving was hard as we spent 15 years in one place and then moved three times in 12 months totalling around 20,000km. We never really unpacked all our belongings. Both my wife and I have lost close family members since we made the decision to move and that has been particularly tough to overcome. Add to that the fact that life is very different culturally to what we were used to – it’s not been all plain sailing so to speak. Getting the dog through immigration was probably one of the most stressful things I have ever done!

We currently rent a four bedroom house and are now having our own house built in the next suburb. I spent quite a bit of time researching property developers and visiting new homes etc. to get an idea of what was required and costings. We decided not to purchase a property until we had permanent residence. I wanted to know we were staying before I committed to anything.

Once that was complete I started looking more closely at houses. We had always dreamed of having a house built and in Australia it is fairly easy to do. We chose our builders mainly because of the help and information they provided with planning and finance. Out of all the builders we only found two who were honest enough to tell us about the “add ons”, i.e. what is not covered in the basic price they quote!

There is just so much choice when building your own home in Australia. We changed the plans to put in a wall and double doors, with very little fuss. It’s important to remember that the cost quoted by the builder for the basic build is very rarely the price you pay – it’s almost always more.

Renting has not been so easy to do and it gets worse if you have pets as we do. Very few rentals accept pets so the first one which offered we took. Renting is not cheap when you earn average wages in Australia and our mortgage is only a little higher than our rent. I did rent a government house for a while in Narrogin but they are pretty dire to say the least. Once we move into the new house we are not looking to move again for quite a while.

Fairly steady with small increases being recorded and I expect it to continue like that for the next year. Interest rates are already starting to climb again so the assumption is that the worst of the recession is now over for Australia.

I am currently employed as a high school teacher. To be honest finding work has not really been that hard. My first job in SA I obtained before I left the UK and started work the day I landed. A lot depends on how you approach it and how much you research the market. Is your resume up to date? More importantly is it the right style for the country you are in? I paid $50 to have my English CV rewritten and changed to an Australian resume and I have stuck with that ever since because it works. My wife has also found work relatively easily mainly through meeting people whilst we are out. Just let them know you’re looking and they will help – they’re brilliant at that!

There are quite a few here, even a couple from the same county. Keep in mind if yo go out in the bush you may not find many expats. When we lived in Berri there were none!

It’s fairy relaxed, the pace of life is much slower and there is less traffic. When the weather is good we pop off to the beach just down the road. I love walking the dog on the beach and watching the sun go down.

In all the places we have been the locals have always been helpful and friendly.

Its fairy relaxed, the pace of life is much slower and there is less traffic. When the weather is good we pop off to the beach just down the road. I love walking the dog on the beach and watching the sun go down.

Can’t really say there’s much that I dislike. Many expats say they dislike things but very often it’s the change in culture they find difficult to deal with. I do get bothered sometimes by the WA ‘wait while’ tag and the laid back approach can get to you. But it’s the Australian way and that’s really why I moved – you just have to practice a little acceptance. I have never forgotten the words of my son’s principle at his new school: “Australia is not better or worse than your home country, just different.” Different values, different beliefs and different ways – enjoy the difference.

Don’t give up on your dream and make sure you know what your reasons for migrating are.

We will move into our new home next year so I guess I have some decorating and gardening to do. We still miss close family but I don’t see us returning to England as we would not have the easygoing lifestyle that we have here. Work wise I still teach but also work in my spare time as a self development coach and am currently writing an e-book about my migration journey. I also offer coaching to migrants covering everything from goal setting to culture and behaviour change.