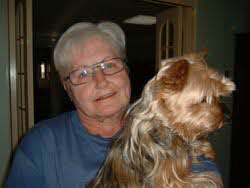 [Expat Focus: Sheila has kindly shared her sad story with Expat Focus in order to make Expats living or considering moving to a Commonwealth Country aware of what may happen to their UK State Pension.]

"On receiving the Age Pension, it enabled me to live in Australia. What I wasn't prepared for was the fact that it was 'frozen' at that rate for the rest of my life, simply because I had decided to live in Australia with my only immediate family. Had they lived anywhere but a Commonwealth country, my pension would have been indexed as it would have been had I lived in the UK…"My name is Sheila Wick.

My husband was killed instantly in a motor vehicle accident near Towcester on 4th October 1998. My one daughter and 3 grandsons lived in Canberra in Australia, so I decided to move there to be involved in their lives and try to build some sort of new life for myself, on my own, without the husband I had known since we were both 7 years of age.

In a period of a few months I made the decision to move to be with my remaining family in Australia; sold my house in the UK; left my job; packed up my home and moved to Australia. I was on automatic pilot at the time of making these decisions. I was receiving a Widow’s Pension from the UK Government at the time.

At the age of 58 I tried but found it impossible to get employment, but with the Widow’s Pension I got by. The proceeds from our house in Lincolnshire enabled me to purchase a home close to my daughter.

On receiving the Age Pension, it enabled me to live in Australia. What I wasn’t prepared for was the fact that it was ‘frozen’ at that rate for the rest of my life, simply because I had decided to live in Australia with my only immediate family. Had they lived anywhere but a Commonwealth country, my pension would have been indexed as it would have been had I lived in the UK.

The DSS, as I’ve always known it, pointed out that this was stated in the little booklet provided to me when I left the country – but not before, and this was not general knowledge. I did read the section that was relevant to me at the time; the Widow’s Pension. Who reads an entire book? Don’t we all read what is relevant to us at the time? Anyway, why would I not expect that an Age Pension my husband and I had both paid into the N.I. Fund for, not as a matter of choice, because there was no choice, would be forever stopped at the rate at which it started?

I am now in the precarious position of wondering how long I can continue to live in my house on my 2001 age pension. Everything is going up in Australia as it is in the UK – except my UK pension. I think it quite comical that if I were living in the UK, I would be costing the government an awful lot more than just my proper pension. As it is, the Australian government is paying for most of my health costs and disability costs.

For anyone thinking of retiring to Australia, or Canada, or New Zealand, or South Africa, to join their children and grandchildren – think again. If they live in America, or you just want to move there for the lifestyle without any family involved, then you will be fine. And most other countries too.

The money is there as by law it can’t be used for anything else but pensions, and the dedicated fund is enormous, but the government can legally invest my unpaid pension and use the interest for whatever they like. If you are a UK resident pensioner with or without family in a Commonwealth country, and you think this unfair, then please contact your MP and tell them that you feel that way.

Thank you for taking the trouble to read this.