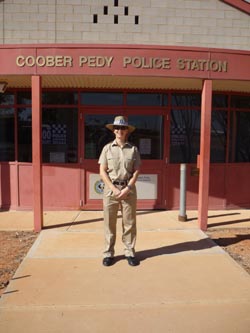 My name is Stella Hartley, a police woman from Barnsley, UK.

I needed a change, simple as that. I wanted a better lifestyle and quality of life and was in desperate need of some sunshine. It really was all about me. I had no real commitments in the UK, and although the decision to leave my family and friends was tough, it felt right.

I knew that when I wanted to move I would stay in the police force. I saw that the South Australia Police was recruiting at the time and I had seen some TV shows about Adelaide and it looked great so that’s where I set my sights on. Prior to the beginning of the recruitment process I had no particular links with Adelaide, let alone Australia; I had never even visited the country.I moved to Adelaide towards the end of 2008. Before I knew it, my house in the UK was packed up and I knew that was the last I would see of my ‘things’ until November. Relocation experts Crown Relocations organised my emigration and packed up my belongings. They were great; they really looked after me and my possessions. I now live in Coober Pedy, an opal mining town about 900km north of Adelaide.

The team from Crown Relocations were really experienced and totally understood how I was feeling as I packed up my life. I was a bit choked when I saw my house totally empty with all my belongings packed on the Crown van. I was left with two suitcases for the trip and although I felt like my left arm had been amputated because I had nothing, it was also quite liberating.

Relocating can be a bit lonely unless you immerse yourself in the Aussie culture and embrace your new lifestyle. Once settled in, I joined a local hockey club – I played in the UK for many years with Barnsley Ladies. I also competed in the South Australia Police and Emergency Services Games with a view to go to the World Police and Fire-fighter Games in New York later this year.

My family are all based in the UK and I only really knew friends of friends in Australia apart from one ex-colleague from my police station in Sheffield who had transferred to SA.

I miss my family a lot. I only have a small family but that meant we were all pretty close. I have a 2 young niece who I speak to on Skype via my webcam. I miss her a lot. My parents have changed from being technophobes to being at the forefront of technology. We speak on the phone or webcam most weeks. I had a large circle of friends in the UK who I miss terribly but speak to regularly via email and who watch for updates on my Facebook page.

I moved to Australia on my own so it was a big step. During the recruitment process I met another girl who was in a similar position to me at an SA police open day. When we found out that we had both got the job, we decided to house share initially for a bit of moral support.

We found a rental house quite quickly, although with no rental history or Australian references it was a bit difficult. My belongings arrived, as promised, about 13 weeks later and nothing was damaged. It was all unpacked by the people from Crown Relocations in Australia who again, were fab! I lived in a couple of places in Adelaide, renting initially in places much bigger than where I lived in the UK.

I lived in Adelaide for about 18months before I took a transfer to work in the country. I packed up (new boyfriend in tow – not an Aussie, met him in Adelaide, also a cop but from Watford!) and moved to Coober Pedy, SA which is an opal mining town about 900km north of Adelaide. The town averages about 140,000 tourists a year, so it’s a busy little place. There are quite a few expats here, a lot in the mining industry particularly.

I’ve made a lot of friends in the force. In my current town, everyone is very friendly and because it’s a small place, everyone knows who you are and what you do. It’s very friendly and I manage because I like BBQ food and there is always a BBQ and ice cold beer somewhere. The town itself has about 3000 residents and a large Aboriginal community. I have very quickly learned about the traditional culture of Australia and bits of the Aboriginal language too.

A friend here summed up the way of life in one word – uncomplicated. This is a great description and is absolutely spot on. It’s refreshing to not be surrounded by shops and traffic – we don’t have a set of traffic lights in the town! Since being in Coober Pedy, I have had the opportunity to discover more of the real Australia. My new home is a dugout – the house is carved into the side of the hill thus keeping the temperature at a constant 23/23 degrees Celsius throughout the year. Living underground is an experience in itself! I have enjoyed sampling the local delicacies of kangaroo, emu and camel which are very popular and very tasty. I am experiencing things that I never dreamed that I would have the opportunity to do.

Now I have satellite TV, I have a lot of home comforts in Coronation Street and Catherine Tate! At first, I missed certain brands of chocolate and other food items that aren’t the same. There are some good greasy spoon cafe’s in Sheffield and Yorkshire bacon butties can’t be beaten! Having been here for 2.5 years now, I miss less and less in terms of home comforts because you start to forget what there is. There is a big void in the market in Australia waiting to be filled by pickled onion monster munch! I miss people from home more than anything although I have had lots of visitors since I arrived

Think carefully about the move. You have to start all over again and the distance from family and friends can be difficult. It’s not for everyone. Do you research first. Going on holiday to a place for a few weeks is not the same as moving somewhere permanently. It’s very easy to fall into the same routines that were in before you made the move and that \’s not what it’s about. Be prepared to move around until you find a place to settle in your new country.

I have no desire to return to a big city to work or live. After this posting, I would like to go to another country town, maybe nearer to the ocean but the jury is still out. So many people move abroad and then stay in the once place, quickly falling back into a routine that ends up being very similar to what they left behind. I am experiencing things that I never dreamed that I would have the opportunity to do. I work on the principal that I moved 13,000 miles so another 1,000 miles isn’t going to make that much difference!