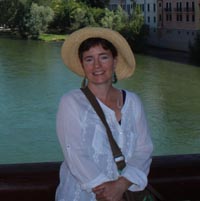 Kelly Bembry Midura, spouse of an American Foreign Service Officer for the last 25+ years. I blog about the Foreign Service, our many travels, and several other subjects at wellthatwasdifferent.com.

Our first assignment was to La Paz, Bolivia in 1989. Since then we lived in Guatemala, Zambia, El Salvador, the Czech Republic, Washington, DC, and finally, Vienna, Austria from August 2011 until about three weeks ago.We also were separated for one tour while my husband worked in Kosovo. We are currently in Washington, DC so that my husband can learn Polish before we move to Warsaw, Poland next summer (2015).

The assignment process in the Foreign Service allows for some choices as to where we live, but it ultimately comes down to the needs of the service. After a lot of research and thought (especially if there are school-age children involved!) we submit a “bid list” of anywhere from 5 to 20 or more posts that we are interested in, depending on available jobs, and the seniority and area of the specialization of the officer. The process is not all that transparent and can be very frustrating.

Every move presents challenges. The Internet has made moving a lot easier, though. There are so many Foreign Service and expatriate online networks in which you can ask questions and get essential information. I am already on an expat group for Warsaw and am learning so much about that city.

The primary challenge in moving to Austria was the language barrier. I was proficient in Spanish before arriving in Latin America, and eventually became fluent. In the Czech Republic, I had just a little Czech, but no one in Prague really expects foreigners to speak that language, anyway!

Upon arrival in Vienna I had just a few words of German that I had picked up from using Rosetta Stone. On top of that, I arrived at post three weeks ahead of my husband due to an injury he had suffered just before leaving DC. Our kids were already scheduled to arrive in Vienna from two different locations, so someone had to be there to meet them.

Fortunately, Vienna is not all that different from Prague, and so I already knew some routines like you have to weigh and label the produce at the grocery store and bag your own groceries. But otherwise, I was totally lost. It was a bit stressful, but I knew I had fetched up in a really nice place, so that kept my attitude positive.

How did you find somewhere to live? (e.g. how did you locate a suitable property?

We are lucky in that the State Department provides our housing. However, they don’t always get it right. Our apartment was over an hour from my son’s school by public transportation, located in a very hot attic, and in poor repair. So, we appealed to be moved, and after a year the embassy terminated that lease and transferred us to a much nicer apartment in a better location.

It wasn’t much fun having to move mid-tour, but it was worth it in the end. Vienna was a much better experience for us from that point forward.

I did not have much of one, due in part to the language barrier. However, I think it’s fair to say that the Viennese are not especially interested in reaching out to foreigners. It is a very formal, insular culture. I doubt that even fluent German would have much of a difference in this regard.

I loved that Vienna was safe and easy to navigate by public transportation. After a string of high-crime posts early in our career, I really appreciate being able to get out and around by myself with no worries. I thoroughly explored the city during our three years there.

There are also terrific outdoor opportunities in and around Vienna. We frequently went hiking in the Vienna Woods (Wienerwald) or in the many national parks that are within day-trip distance from the city. With a stop at a forest “hutte” for a hearty lunch, this was our favorite weekend activity.

I definitely do not like living in other people’s houses with ugly government-issued furniture! I also find moving to be very stressful: I am not a “rolling stone” by nature. However, it is getting a bit easier now that my youngest has graduated high school and it is just the two of us to worry about.

Having just come back to the U.S., I can name a couple of things off the top of my head. America is so amazingly convenient compared to Austria. Though Austria is a wealthy country, and is way ahead of America in terms of public transportation and other infrastructure, they still lack modern conveniences like clothes dryers, air conditioning, and decent kitchen appliances.

Austrian stores also seem to be closed more often than they are open: every Sunday, every Catholic holiday, and short hours on weekdays. This drove me slightly nuts.

Americans are far more diverse, open and friendly than Austrians. Not that Austrians weren’t generally polite. But it’s nothing like here, where the grocery store cashier asks you how was your weekend!

All that said, Vienna is still a very pleasant place to live, on the whole, and has the advantage of being a great jumping-off point to travel to warmer, friendlier climes such as Italy.

Everything in Vienna is very expensive except for beer and wine. Seriously. Also, see closing hours, above. I did not shop retail in Vienna. I did, however, enjoy the plentiful second-hand and antique stores and regular flea markets. Even Austrians know that their country is expensive so they love to bargain hunt!

Austrian food can be very good, but it is also bland compared to many cuisines and is often very heavy. Salt is the only spice in many dishes—and plenty of that. Green vegetables are a bit scarce. It’s pretty normal for expats to gain weight there, and to also fantasize about decent Mexican food!

I will personally miss the awesome sausages and cheeses, but I will also be happy never to see Wiener schnitzel on a plate or potatoes in a “mixed salad” again. The beer and wine, of course, are excellent.

There are some great Italian restaurants in Vienna. We also found good Thai, Indian, and Vietnamese food with a bit of searching, and were regulars at a favorite sushi restaurant. The best strategy is to get off the tourist track and ask around the expat community in order to find really good, flavorful, non-Austrian food.

As far as the Foreign Service goes, I would say do your research and go into it with your eyes wide open. You will serve in poor, crime-ridden places. You will probably have to separate for at least one tour. Your spouse will probably not have a full-time, linear career. It is a very stressful lifestyle and a very serious commitment—though not without rewards.
As far as Vienna goes—sure, move there! It’s a fun place. Be ready to live in a bit of an expat bubble, to deal with long, gray winters, and to gain five pounds. But otherwise, it’s all good.

We move to Warsaw, Poland next summer, which will most likely be our last overseas tour. That will complete about 30 years in the active Foreign Service. It’s been a wild ride but we look forward to settling down in the DC area in a few years—with regular travel, of course!