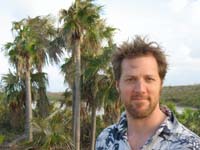 I am the son of Australian and Dutch parents, born in and currently residing in Vancouver, Canada. Working as a ghostwriter, editor and book designer for healthcare and arts professionals over the past 12 years has given me the flexibility to travel, work and volunteer in a number of countries including England, Ireland, Scotland, Belgium, The Netherlands, Singapore, South Korea, China, Australia, The United States, Mexico and The Bahamas.

When I’m not working, playing or volunteering I compose music on the guitar and piano and perform at open mic nights whenever I get the chance. Living in other countries has always inspired my creativity and I’ve found that no matter where I travel, speaking the universal language of music has paved the way to deeper understandings and relationships with the people I meet.Where, when and why did you move abroad?

I moved to the island of Eleuthera in The Bahamas in 2009, desiring the good life, yet chose The Bahamas because I wanted to stay somewhat close to friends and family in Canada. I was in search of a new perspective (as always) and immersion into a culture I knew little about, though had always been fascinated by. The musicians and farmers alone whom I worked and played with enchanted me, and the warm, friendly, playful Bahamians had me feeling like a local.

Turned out I was most popular with the kids; I couldn’t get rid of them! They would regularly (and openly) try and fleece me of my loot, a regular occurrence I welcomed. The laughter and smiles are what I remember most, regardless of how much poorer I was for buying their companionship and amusement.

One of the biggest challenges I faced during the move was adapting to the eating habits in The Bahamas. I was appalled at the lack of food security not only on the island of Eleuthera, but in the capital city Nassau. Sure there were fruits and vegetables, though little grown locally. After a conversation or three I learned why and it made sense. If for generations your family had been whipped to work in the fields, you too would have little desire to toil for your basic nutritional needs. Easy for me to say, coming from a country overflowing with abundant, local food.

Another challenge I faced was getting any work done. The general attitude is “e’ry ting cool (on Eleuthera)” so you can imagine how easy it is to crack another Kalik and go to another ubiquitous fish-fry. It was too easy to be lazy, but hey, life is for playing.

Overall, the challenges I faced had more to do with my beliefs and preconceptions about how I (and therefore others) should be living, rather than due to any external circumstances. I believe we see what we want to see, and we see what we believe.

I first found a rooming hotel in Nassau, thanks to extensive research online (the only tool I had at the time, thanks to lack of friends or acquaintances on the ground). Turned out the owner had lived in Canada, so this was fuel for easy conversation. His staff were all from Haiti it seemed, so my French came in handy. They were hardworking, quiet, and ready to help split a coconut or clean the pool.

Once on the ground, I had access to the local papers and word of mouth and found a small bungalow on the Out Island of Eleuthera (meaning ‘freedom’ in Greek) and a few weeks later I was off on a 12-hour mailboat, amidst snoring, burping, farting families of all ages. When I arrived on the dock at midnight there was a definite lack of public transportation; thankfully a police officer spent the next 3 hours helping me hunt down my house on the beach. At one point he got lost and there I sat in the police station on his computer Google mapping it.

I rented my bungalow from an English science professor named Paul who was gracious, friendly, quirky and eccentric. He kept to himself, which I appreciated, though was helpful and an invaluable resource when it came to locating the best beaches, caves, surf and snacks in the area. We became quick friends, cooking and sharing meals together.

At the weekly above-mentioned fish-fry’s I would regularly run into expats of all shapes and sizes, one in particular being the fellow who penned The Price Is Right theme song. I remember how arrogant he was, having written that tune when he was 18. Sure I will admit I was a bit jealous (being of the musical persuasion myself) though his attitude was off-putting. Apart from this guy every expat I met was pleasant, if not understandably aloof, wanting to keep their island secret a secret.

I made more friends in the 6 months I lived in The Bahamas than I do living in a new Canadian city for a year; these have included Calgary, Toronto, Vancouver, Victoria and Charlottetown. The locals seemed used to expats, and used to having a good time.

Yes, I wondered if I would ever truly feel like a local (thanks to nothing more than the color of my skin) though with time (and perhaps a cross-cultural marriage) I would most likely be able to blend into island life with ease. But that’s me; I consider myself an open, curious, generous and grateful person, and I believe it’s difficult to not be able to connect with other people when you are so willing to. In retrospect, I not only felt like I gained the respect of The Bahamians I met, but I also came (quite easily) to respect them. That’s the secret to any sustainable relationship.

In the Bahamas I liked how I could be myself. When surrounded with regular, ordinary, repetitive, usual, commonplace nouns in Canada I tend to forget how confident I’ve been in out-of-the-ordinary situations, how resourceful I’ve become when faced with obstacles, difficulties and (real or imagined) dangers, and how easy it is to just relax and do as one does when in a new place.

What I like about life in Canada is eating foreign foods and hearing languages I don’t understand. I also appreciate how peaceful I feel when I’m here. I felt peace in The Bahamas, though nothing like the calm I feel in the place where I was born; I know I am always welcome, and can always return. And that calms my travel bug nerves.

Not being able to distract myself with professional sports tournaments on television – or even via the internet, for instance. Living in The Bahamas, I missed access to affordable, local organic fruits and vegetables. At times, the lack of familiar faces had me feeling lonely, though there was a cure: I went exploring, always delighted at how spontaneous, thoughtful action lead me down roads I would not have otherwise traveled – both literally and figuratively.

Other disadvantages of the expat life are the usual complaints: dealing with borders, immigration officials, red tape, delays, questions, and the stress of physically traveling to and fro, renewing visas, obtaining health insurance, getting shots; the everyday stuff required by well-meaning (if not stuffy) laws.

If you feel drawn to another country or culture, allow your curiosity to lead you there. Life is a big experiment and no one will ever judge you more than you judge yourself, so stop worrying about what your parents or kids or friends or coworkers think. There are 7 billion ways to do everything, so pick a place, buy a ticket and go for a visit. You’re not getting any younger.

At the very least, price it out. Talk to supportive friends and/or family. Read travel blogs. Go the library. Find out where the people whose culture you’re curious about hang out. Is there a restaurant you can go to, or cultural event you can attend? My advice to you is allow yourself to play and you will always find your way.

John Lennon said your life is what happens when you’re busy making other plans. In one of my songs I sing: Don’t plan a thing / You can’t plan anything / You know when you do / But don’t -but you should. That being said, I daydream about moving back to Western Australia following a trip on the Trans-Siberian railway and return to Northern China.

I intend to continue writing and publishing books and music, laughing, singing and dancing, eating local organic food and sleeping in every day; my definition of success (I sound like a hippy). Regardless, I have always found contentment living the life of a creative gypsy and will likely continue to do so. Viva la vida!