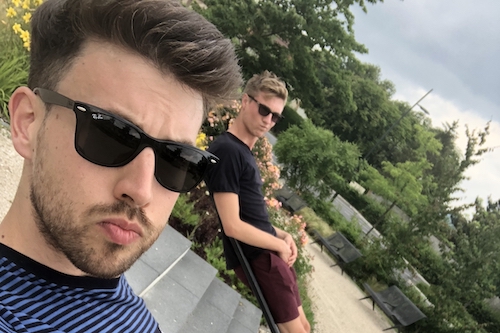 I am Sam Jenkinson. I am a PhD student, studying demography at the university of Leuven, Belgium. I am 31 years old and from Hull in the UK. I am currently moving in with my partner, Arne, who is a dance teacher from Belgium, and I am entering the final year of my PhD.I am interested in politics, (see my Twitter where I report on my life, but also comment on UK politics and live tweet events in the houses of parliament in a (hopefully) funny, but informative way). I am also really interested in food and cooking, and the ways these interact with our traditions and memories. Arne and I have a food podcast in which we explore our own and our guests’ memories of our relatives’ food (both the tragic and the delicious). I also tweet about my life, personal challenges of life abroad, but also personal issues I want people to talk about more. This includes problems such as mental health and personal challenges I have experienced that I want people to feel comfortable talking about.

I first moved abroad in September 2015 to do a Master’s in economic History in Lund, Sweden. I stayed there for two years, completing my Master’s, before moving to Leuven, Belgium, after obtaining a position as a Marie Curie fellow on a PhD program in demography at KU Leuven.

As to the question of why? The primary reason was that I wanted to live in different places and really experience new ways of life (but also, whisper it, that there were no tuition fees in Sweden!). I really wanted to challenge myself. I wanted to study something difficult, out of my comfort zone (i.e something extremely quantitative).

I had lived in Manchester in the UK for five years and really felt completely stuck, both career-wise and also in my life. I was 26 (now 31) and I felt stagnant. I was not using my original degree and I felt really very unhappy and that I was struggling. I had faced a lot of difficult personal situations, including being assaulted and robbed. I worked in a call centre and, though I really liked my colleagues, was really quite depressed on a personal level. It all came to a crunch point and I just said to myself:

“You know what, Sam, this isn’t going to change unless you pull your finger out and change it yourself. Stop waiting for someone to fix it for you.”

So I did. And I never looked back. I worked for a couple of years doing all the overtime I could and saved as much as possible. I almost bit off more than I could chew at many points since then, but I believe it has worked out for the best.

One of the big differences between the move to Sweden and Belgium is the ease of making friends. In Sweden I was on a Master’s program and so you are part of an institution where many people are in a very similar situation, both linguistically, and also in the temporary nature of being in the country.

In Belgium, as a PhD student, much your life is working alone and there really aren’t a lot of people in the same boat as you. In addition, those who are in the same situation will often be at different stages in their lives than you, and will be more established in their lives and less available to make friends.

This is something which may seem obvious to many, but it is something that has come as a challenge. How to manage loneliness, particularly as someone who has experienced mental health challenges, and how really to be proactive in this respect in seeking out contacts and support where it is available and needed.

I found an Italian girl who was also moving to Belgium to study a PhD. I saw her advert on Facebook and we got in touch to meet for a coffee to see if we would click and consider living together. I was quite nervous and on the walk there to meet her had all of the worst thoughts going around in my head; “what if I say yes and then regret it, what if she’s a murderer, what if she steals.” In the end this was obviously highly irrational and we got along really well.

We looked for houses for around a week but were struggling to find anything in Leuven. Eventually we were about to give up when we saw an old woman waving at us. She had watched us calling telephone numbers we had seen on “te huur” signs in house windows on the street and called us over. Her apartment had just become available and she wanted to show us around. It was completely by chance that she saw us and decided to shout us over, but we really were so lucky she did. The house was large and cheap, and the landlady was so kind. She agreed to buy us new beds, a washing machine, a new dishwasher and also a new oven. She even allowed us to move in early and we agreed to help redecorate it with them in the preceding week to make it faster. So all in all there was a lot of luck involved. She was a great, generous landlady.

In Leuven there are quite a lot, yes. Being a university town there are quite large numbers of expats. One problem I personally have, however, is being much older than the majority. At 31, I don’t really feel comfortable in many of the areas of the city dominated by 18-21-year-olds during the week, with all of the loud heavy drinking, though often I confess I do wish I was still capable.

The three closest relationships I have with Belgians are my partner,
Arne, whom I will move in with this month in Ghent, and also my two closest friends in Belgium, whom I have known since I moved here, Pieter Jan and Wouter. All three I would describe as quite typically Flemish in their own ways, but they are all really welcoming and warm. They have made the transition to being here really hospitable and easy. I hope they stay in my life for as long as I live.

The price of trains! Coming from the UK I am never not shocked at how cheap it is to go from point A to point B in Belgium. I love being able to walk and cycle everywhere also. Obviously beer and fries too, but especially a “Lucifer”.

No, I’m joking. One thing I dislike is the price of seafood in Belgium. It feels so extortionately high and the range is quite low, which I was really not expecting at all.

What is the biggest cultural difference you have experienced
between your new country and life back home?

Organising social activities with Flemish people is like planning a military coup. You are proposing something simple like a coffee and they get out their agenda. At this point you realise it won’t be possible for several months until they have a 30-minute slot on Monday afternoon.

I do quite a lot of food tourism and my partner and I have a podcast based around cooking. In it we reproduce the best and worst food of our, and our guests’, grandparents. So we have a big interest in Belgian cookery too.

I actually love the food in Belgium. This includes the more traditional things such as mussels and frites, vol au vont and anything with Witloof, which have become obsessed with.

Also, I will never get bored of Belgian beer. I actually told a friend in the UK that what he is drinking in Britain is not beer and I cannot carry on with that lie. It did not go down well.

What advice would you give to anyone following in your footsteps? What are your plans for the future?

First thing on the list is that I plan to finish my PhD! Following that I want to stay in Belgium, as this is where my partner is. I don’t want to move away from him, or change countries again. I want to settle and find a job here so that we can settle down and make our life together.

In terms of advice, what I would suggest is being pro-active. Speaking as someone who is quite an introvert myself, it can be tempting to let the shyness take control. This may feel better in the moment, but you lose so many opportunities to meet friends and build a support network. As a migrant, this is something really important that you don’t have and you really don’t know when a moment of crisis will appear and you will need it. So my advice is take every opportunity to meet people, even if you don’t feel like it, you never know who you will meet or how it could change your life. ☺