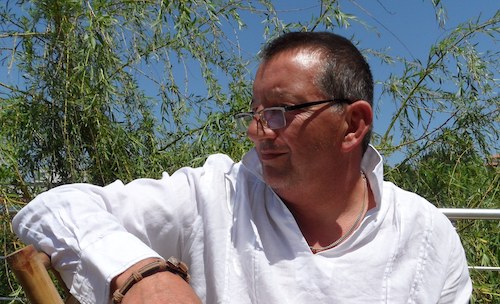 My name is Martin Stephenson and I am an English artist, author and teacher from Yorkshire.

I moved to Bulgaria 10 years ago to semi-retire, as I lost my sister to cancer and decided to live the dream instead of waiting for retirement.I had always wanted to be an artist, but due to work, families and mortgages it wasn’t possible for me to do it earlier in life.

I had spent time here on holiday and bought a house, so the move was straightforward. Though getting good tradesmen to refurbish my village house was ‘challenging’ ! Bulgaria is a country that people either love with a passion or hate. I loved it due to its quirkiness.

Initially I appeared on the TV show Property Developer Abroad, but despite this still got ripped off. It made for great TV though. My eventual village was in an area that was similar to the place I left in Yorkshire, which was on my list of things I wanted. Which were, long-distance views, a detached house and far enough away from my neighbours so I could play music loud!

I have now moved from a village house with expats to the coast where there are none. Which is exactly how I like it. I now avoid them like the plague!

Initially one is drawn when you hear an English voice, say in a supermarket. Then I soon came to realise that actually I wouldn’t have even associated myself with such people had I met them in the UK. In fact my house was broken into twice by an expat living in the same village.

Though as a typical Brit I speak little Bulgarian, the locals are lovely and accepting. I think a smile and a sense of fun works in any country. Bulgarians generally are very friendly people. Most of my group of friends are foreign, either Bulgarians or Russians.

Everything, the weather the great food and family values long since lost in the UK. The country, since the fall of socialism in the late 1980s, is changing fast, but I think it will be the place I call home for the rest of my days.

Country pubs, but little else. There is little to dislike about my life. It’s cheap to live here and once I get my pension next year I know that I will be able to live very comfortably.

People are poorer here, despite which they are very resourseful and happy. Though Bulgarian people have a strange attitude to rubbish and don’t respect pets and animals generally, which I know some expats struggle with.

Food tastes like it used to in the UK in the 60s, tomatoes being particularly tasty, though not perfect to look at. Everything here is better, tastier and half the price in the UK.

JUST DO IT! If you are flexible, tolerant and caring you will probably fit in. If you yearn for all things UK or you are a feminist then it may be a struggle for you to settle here.

TO DIE HERE AND PAINT UNTIL I DROP!

You can find out more about Martin and see his artwork on his website.