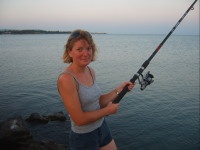 I am Rachel, a British girl, born in North West England. Studied medical biochemistry and then did a law degree and practiced as a lawyer in a high street firm for a couple of years before getting bored with the desk job and 9 till 5. Lived on a farm most of my life until leaving the UK. Family all still in north England.

I moved to Central Bulgaria in October 2006. I had originally visited Bulgaria purely looking for investment purposes. I did put down a deposit on an apartment in the ski resort of Bansko but soon pulled out after seeing all the development and facing problems with the developers. But I traveled around Bulgaria a lot and loved the country. Myself and my partner at the time decided we needed a change of life and to leave the family farm we were trying to run due to financial and other difficulties. I had already started investing in property in Bulgaria back in 2005 and was working part time selling property in Bulgaria in partnership with a small agency there so seemed logical to move to Bulgaria. However, a couple of months before we were due to move out to Bulgaria my partner (now ex) decided not to come and so I moved out alone.What challenges did you face?

Initial challenge was moving to a new country on my own as a single woman. I knew only the real estate agent I had bought through and my lawyer. The language barrier is of course a massive challenge. My new house was supposed to be finished by the time I moved over but was in fact little more than a shell. It took over a year to complete and three changes of builders. I attempted to take the original builders to court but due to corruption, poor legal advice, poor legal system and other factors I ended up embroiled in several court cases started by the builder and his family and lawyer to pressurize me into dropping my case. I faced over 2 years of court appearances and was left with huge legal bills, a criminal conviction for slander (complete nonsense) and around 25,000 Euros out of pocket in lost expenses, fines, legal fees, court fees……

What challenges do you still face?

Ongoing problems with things like the water board and electric board. You go to try and pay your bill or change an account into your name for a property and discover the old owner left a huge bill and this becomes your responsibility. The electric and water board do not bother to chase the old owner for years and years of unpaid services, but when the ‘Brit’ goes into try and sort out the account, they are ordered to pay for all water used over last several years. Meters suudenly read large amounts even though the water is turned off – allegedly caused by leaks, builders……all sorts of reasons and excuses are given. You can argue until you are blue in the face but get nowhere. As a foreigner you are constantly seen as an easy target for extorting money and have to be constantly on your guard about being ripped off.

Language still an ongoing problem as extremely difficult. Plus there is enormous amounts of bureaucracy for everything. Something that would take 5 minutes in the UK takes days of visiting offices, queuing, filling in forms, only to have to go back to somewhere else for some other bit of paper…

Can you tell us about your property?

All houses cost me under 15,000 Euros, some being as cheap as 4,000 Euros. Renovations were typically around 30,000 Euros for each old property.

From 2004 to 2007 Bulgaria saw a massive growth in its property market. Foreigners (typically Brits and Irish) flocked to the country to purchase cheap village houses for under 10,000 Euros or cheap sea or ski apartments. However, over-development and over-pricing in the resorts caused many problems and along with the recession, this caused a massive crash in the market for new build apartments. Property sales of off plan and new apartments along the coast and in the ski resorts have all but died. Many are now selling at a huge loss.

The rural market has faired much better. Between 2005 and 2007 values rose by around 20 to 30% a year for typical village houses. Due to the world economic crisis the rural market has seen a slowdown but there are still many people seeking a change of lifestyle and wanting to buy a house with large plot and barns and be self sufficient. Typically a 2 bed village house with 1000sqm in decent condition will cost you around 10,000 to 15,000 Euros.

Not so many in my area, probably around 20 of us in the immediate area, spread out in various villages. There are more expats in the city of Stara Zagora working for large firms and quite a few British own and live a little further south around Chirpan.

Generally the locals in the village are very friendly. The language barrier makes communication difficult but we usually wave and say hello each day.

Obviously the lovely, long hot summers are great. There are many BBQs, days by the pool, days fishing etc. I love pottering about in the garden, playing with the dogs, watching my vegetables grow. I have made some fantastic friends with other expats.

It can be fairly difficult as a single woman. Women are typically second class citizens in Bulgaria and it can be hard to be taken seriously and get anything done. It is also difficult without the support of a partner or family. It is hard being away from family when you just want to nip around to your parents or brother for a cup of tea and a moan. Not speaking the language well makes life pretty tough at times.

Rent first for a few months to a year to make sure you really do want to move abroad and live in another country. This way if it doesn’t work out you can go back home saying you have tried. Many people come to Bulgaria without a thought of how they will make a living and whilst it is very cheap to live here, you cannot live off thin air.

Did you set up your own business when you moved to Bulgaria? If so, what type of business was it?

Yes. I am involved in property sales and now mainly moving towards property rentals and running my website (www.thetravelbug.org) as an advice site for others thinking of moving to Bulgaria.

Please can you share your experiences in terms of initial set up, bureaucracy and day to day running of the business?

Initially I worked in partnership with a Bulgarian real estate agent and shared his office due to my house not being finished and having no internet where I was living. After about a year I rented my own office and branched out on my own, acting more as a ‘middle woman’ to source appropriate properties for clients from various agencies and help in the purchasing procedure. This was done very small scale and I really just run an advice site for others looking to move to Bulgaria or invest in property here. The main problem is of course the language but I work only really with the British so this is not too much of a problem and I have a translator I can use when needed.

What advice would you share with anyone setting up a business in Bulgaria?

You will need to learn Bulgarian, or at least have a good grasp if your business is to entail working with any Bulgarians or Bulgarian companies or services. You need to learn a vast amount of patience, things happen as and when, could be tomorrow, next week or next year….and forget logic, does not exist in Bulgaria. Oh and a Bulgarian is always right. There is the Bulgarian way and only the Bulgarian way of doing things!

I am just completing landscaping the gardens for my long term let properties and hope to get these rented out. I wish to sell 3 of my rural, unrenovated houses as it is too much to keep an eye on all 12 properties and I want to concentrate on running the rental properties. I do not intend to do any further renovations. I would like to build up the holiday let side and along with 2 friends have set up a garden clearance and landscaping service for other expats. I tend to spend summers in Bulgaria and winters in France, travelling between the two by car with the dogs.