My name's Jessica! I'm originally from Ft. Thomas, Kentucky (population about 16,000), but now I'm living with my husband in Lima, Peru (population about 8.5 million). I love the city, the language, the food, the people, but obviously my total lack of city survival skills can make my city-smart hombre a little anxious.

My husband and I met while we were both studying abroad in England; we both had to go halfway round the world to find each other. We lived there for about a year, and then we did a year in Miami, Florida. Miami was amazing, but in search of another adventure (and a more appealing price tag), we decided to spend a year in his home country. That was 2013. After that, we spent a year at home in Kentucky together. Having family and friends so close was wonderful, but we're both suckers for the ocean, so at the beginning of 2016 we returned "home" to Barranco, an artsy little neighborhood in the giant city of Lima. 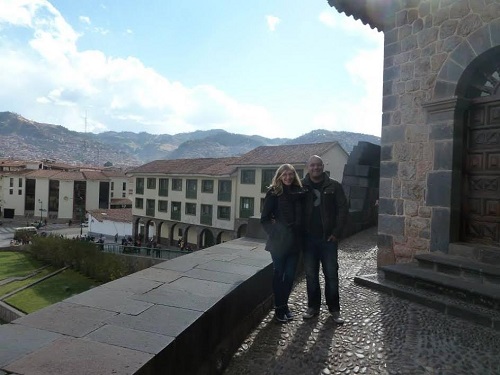 When I first came to Peru, I thought Spanish wouldn't be a problem. I'd been studying Spanish for about 6 years, and I'd written an undergraduate dissertation in Spanish too. Turns out, though, the ability to analyze Lorca's poetry wasn't exactly hot party talk or particularly helpful with the average store clerk. Every shopping trip was a nightmare at first! Over the last year or so, I've gotten much better (and braver) with my Spanish, so it's much easier to go out and enjoy socializing. That said, I don't think I'll ever pick up on the cheek kissing. I still live in perpetual fear that I'll accidentally plant one on somebody while they're making the "hello" rounds every get-together.

I know there are a handful, but my husband has so many friends, I tend to hang out with Peruvians. It is nice to run into expats while I'm out though; every once in a while I'll overhear an English conversation in the grocery store line or at a coffee shop and chime in.

My blog is just shameless about how much I'm in love with the food here. Peru has desert, jungle, and (maybe most importantly) ocean. Every new restaurant, every new dish, every new fruit or vegetable is a reminder that there's always more in the world to taste. I've come to appreciate the landscape, which has its own sort of haunting personality as you drive through the bare, rolling mountains alongside the rocky ocean. Very Hemingway, I think. I love the innovative, entrepreneurial nature of the people here too. 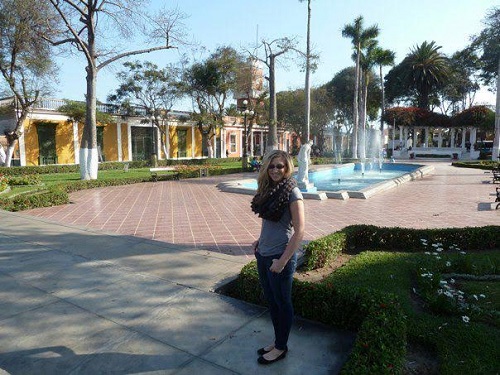 I've found that most of my dislikes boil down to "it's just not home." There's definitely not enough cheese available here for my taste: If all this queso fresco nonsense was replaced with cheddar, Peru would be a better place for this American. The traffic is nightmarish, even for a big city; I drove in Miami, but here? No way. Feeling unable to drive (at least safely) is a big loss of freedom. Being an expat in general also means a lot of flying back and forth, which was pretty detestable before my husband added a fur baby to our family (who obviously, as part of the family, has to come along for holidays).


What is the biggest cultural difference you've experienced between your new country and life back home?

By my pre-Peru definition, a "party" was a get-together with a few (i.e. 4-5) friends at my house in the evening (i.e. 8 pm to maybe 2 am). Ok, ok, I know that's lame even for a town in Kentucky, but it was at least passable there. In Lima, what I'm describing could at best be described as pre-gaming. I thought "party all night long" was just idiom until I got here. They literally party until the sun's in the sky again. And there's dancing! I mean, not the sort of bounce around grinding thing, but real, actual dancing. The least talented among the casual dancers here will go on about how bad they are one moment and burst out in a perfect salsa number the next.

Anybody considering living abroad is probably already adventurous. That said, I think it's easy to underestimate how hard it can be to connect with people in your new country, especially if you're operating in your second language. For me in particular, being more of an introvert compounded a challenge I already didn't foresee. Yes, I'd already lived abroad in England for a year, but there I'd had university (and English!). In Peru it was a lot harder to form my own friend circle. Based on my own experience, I'd say don't give up! Be brave! Stomp your way awkwardly into a few conversations; you'll get the hang of it. Mourn the times you wanted to say something but were too shy to do it—those times happen to everybody—but don't let them determine whether or not you make an effort next time. For my fellow introverts, find the courage to seek out and attend some public get-togethers, join a class, volunteer for something; a few events will be busts, but keep looking. It's so worth the experience of having conversations with locals, even if it's intimidating at first.

As long as there's adventure to be had, my husband and I are happy campers. Fortunately for us, Peru has a lot of adventure to offer: We haven't even been to the jungle yet! We're nomads at heart though, so after another year or so, who knows? We'll probably flying off to our next destination.

You can keep up to date with Jessica's adventures on her blog, La Colorada.