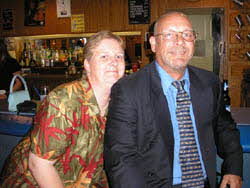 My name is Lyn Worrell. My husband Richard had been married before when I met him in Saudi Arabia and we got married in Jeddah at the British Consulate. I “inherited” 2 daughters and now have 5 wonderful grandchildren, ages ranging from 9 years to 18 months.

I moved to Canada in August 2004 and came with my husband as part of the “truck driver invasion” into Saskatchewan to improve the immigration figures. My husband was recruited by Siemens Transportation in Saskatoon and was sponsored through them with a temporary work permit to work in Saskatoon. We both decided that life in the UK did not hold much excitement for us and felt Canada would provide a better lifestyle for us. We got our Permanent Resident status in November 2006 and the paperwork for our Canadian Citizenship was submitted in July last year and should be completed sometime in 2011.What challenges did you face during the move?

One of the biggest challenges, was trying to decide which of our belongings to take with us and what to put in storage. We decided to rent out our house in the UK until we had been given Permanent Resident status in Canada. I felt there was just that 1% chance of being turned down and hence we would need somewhere to stay in the UK if we got “kicked” out!

We decided to rent for the first year while living in Saskatoon as I was not given a work permit until we had actually applied for our Permanent Residency and thus was unable to work. We felt that if we rented somewhere, we would have a better idea of what we could actually afford on one salary and then perhaps buy a property once we had two salaries coming in.

We bought a small house in the centre of Saskatoon in June 2005 and sold it two years later when the property boom hit the prairies and made enough money to be able to move out to New Brunswick. Also by that time, our Permanent Resident status had been approved and we were not tied down to living in Saskatchewan. We also felt happier about selling our UK house. We now live in a 5-bedroom house on 18 acres of beautiful woodland, on the Kingston Peninsula, about 20-25 minutes outside of Saint John. We would like to downsize to a smaller house and fewer acres, but have not found the “right one” yet.

Since we moved to New Brunswick in 2007, the property prices have probably gone up about 4% each year over the last couple of years. However, we have put about ($40,000) in to improving our house and at the current prices, would not get back much of that money spent.

Oh dear, I was dreading this question. I am currently self employed. I am a fully trained and very experienced (28+ years) medical secretary. However, as New Brunswick is the ONLY bilingual province, I have been unable to secure a position of medical secretary as I do not speak French. To me, this is the only downfall of this province. I am contracted to work for a company called Accentus that provides medical transcription services to a variety of hospitals canada-wide.

Initially I was wary of working from home as I didn’t know if I could trust myself to put in the hours. However, now over 2 and a half years later, I LOVE it. I don’t have to worry about travelling, parking, what to wear, lunches, etc. I also love that it is flexible and I can work whatever hours I want, depending on whether I have visitors or have other appointments. Also it is better for our dogs that someone is home all the time.

When we moved to New Brunswick, we were lucky in that several of the other British drivers that also came out to Saskatchewan under the same pilot scheme, had moved here and it made life a bit more bearable knowing there was someone at least we knew that we could vent any frustration to.

It is a very small, close-knit community on the Peninsula and my husband joined the local Legion which helped us meet other people and fit in to the community. We also have a wonderful local shop which has turned out to be a great meeting place for the locals.

Where do I begin? I love the peace and quiet of where we live. Our house is situated about 200 yards from the road and cannot be fully seen by anyone passing. Everyday the weather is different, the wildlife is different and I have never felt so relaxed living in a wonderful place. I can remember the first winter here (which was particularly bad) and I was sat at my desk typing away when all of a sudden out of the corner of my eye I spied a movement. Lo and behold, a deer came out of the woods and crossed the garden, followed by another, and another, and another until I had the whole family walking down the driveway. Luckily I have proof of the visit otherwise no-one would have believed me! Now both my camera and my binoculars are sat on the desk while I work as you just never know what might come visiting!

Of course, I miss not having my family around although I get regular visits from my parents (also avid travellers) and of course the grandchildren love it out here – they can run around and shout to their hearts content and no-one will complain!!

Both my husband and I have decided we do not wish to end our lives in Canada. We both miss our families a lot, especially the grandchildren and hence we shall probably stay in Canada until it is time to retire and then we would like to move to somewhere in southern France, closer to home and family. So if you know of anyone that is selling a small (2 bedroom) house, detached, with about 1 acre of land somewhere in Southern France, perhaps in about 5-6 years time and it doesn’t cost more than 100,000 Euros – then we would be interested!