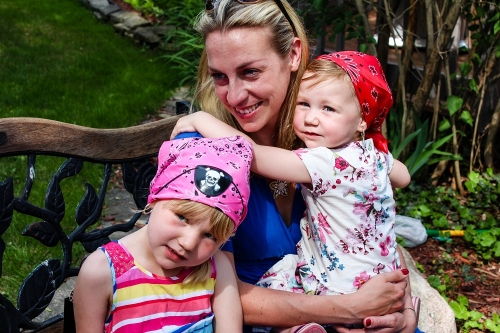 The fear that has been stirred up in the British public over immigration has lead to knee jerk reactions from the government leaving families like mine in a devastating position. By treating all immigrants into the UK as potential criminals all desperate to bleed the state dry they have simultaneously closed the door to highly skilled, talented young people who would be an asset to the UK.Here is my story

I am Scottish, I met my Canadian husband while he studied for his MBA at Glasgow university. We fell in love and he decided to settle in Glasgow with me. He worked as a Regional Sales Manager under the skilled migrant visa.

We married in 2008 in Perthshire, bought our first home (which we still own) and in 2009 welcomed our daughter Claudia.

In 2011 my husband was offered a job at Blackberry in Canada. We decided to move to Canada where I became a stay at home Mum leaving my job in television.

We felt we were young and this would be a good time for a little adventure so I became an expat. We would try it out and if it didn’t work come home and continue where we left off. We have even kept our flat in Glasgow as a base so we would always have somewhere to live. The plan was always a five year one so our daughters would be back in time to start school.

My husband now works here in Canada as a Sales Director for a Software company earning over $200,000 a year, because his career has gone so well the move back home has always been postponed. It has been a great opportunity for me to be at home while the children are young and live a traditional family life that I always wanted. However, it was never going to be forever.

In 2014 my mother became very ill. It has made me re-evaluate what is important in life and she need us to be close now. She looked after me so well for so long, how can I turn my back on her now?

I have been devastated to discover that while we have been away the immigration laws have changed.

Our family income does not count for anything, only my income which as a stay at home Mum is nothing. In order for us to move I would have to leave my husband and work for 6 months earning over 20,000 a year.

Only once I have managed this, a highly unlikely prospect considering I would be a single parent who hasn’t been in the job market for over 5 years, would the process of applying for his visa begin.

I have emailed the Minister for Immigration, James Brokenshire and asked him if he could imagine putting his family in limbo like this? Split from his three children for an undetermined number of months, while their Mother puts them in daycare in order to work full time. Not knowing when or if their Father will be able to join them.

We have savings and equity in our Canadian property but it doesn’t reach the colossal 62,000 pounds needed. Plus, we have to have the savings in our bank for 6 months before we can even apply for his visa. Where would our family live for 6 months+ while we waited to hear if he would be allowed to come with us?

I feel so utterly let down by my home country. It is unimaginable to me that the UK would not be welcoming my husband with open arms.

-A man that was educated at the university of Glasgow earning him an MBA.
-Owns a property in Glasgow that we cannot live in.
-Has a Scottish wife of 7 years.
-Lived in the UK and contributed highly in tax from 2006 – 2011
-Has a national insurance number and a UK bank account
-Has two Scottish daughters.
-Has an earning capacity of over 60,000 GBP per annum
-Is only 35 years old with at least 25 more years of contributing to the UK.
-Who would be arriving with over $80,000 in his bank account.

Surely, a one size fits all immigration policy is shutting out all immigrants and therefore potentially high contributors to society? Why get rid of the highly skilled migrant programme? Why not have a point system to ensure you only get the ‘cream of the crop’. Does the UK feel so strongly against those not born British that they don’t even want them?

The Home Office has neglected to consider immigrants as families, as units. I thought the Conservative government stood for the rights of hard working families. By reacting to voters who have been stirred up by certain aspects of the media to fear immigrants they have closed the door to many immigrants who would bring huge value to the workforce.

Young, talented and skilled workers who would stimulate the UK economy not hinder it. What has become of the progressive society we lived in, is it true that we have become so driven by fear of ‘foreigners’ that only being born in the UK makes you a valuable member of society?

To me it is plainly obvious that as a British citizen, the Father of my British children, should have the right to work in the UK.

I suppose I should be consoled by the fact that we are one of the luckier families. In time, years perhaps, we will manage to scrape together the savings, sell our house and wait for months in rented accommodation for the paperwork to go though. Those months in which my husband will be contributing 40 per cent of his Income to the Canadian revenue office not the UK economy I might add.

However, I cannot help thinking of those other young people who travelled, fell in love and without realising their fate have exiled themselves in countries all over the world unable to return to their homeland. Such a lot of heartache all to appease the very lowest human emotion of fear of ‘foreigners’.