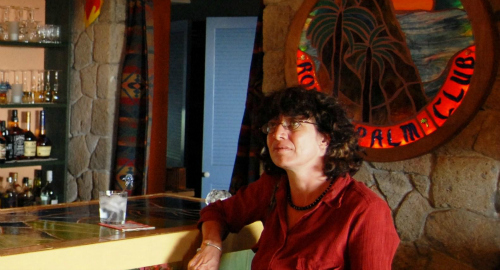 I am an English landscape photographer who moved to Montserrat, a small volcanic island in the Caribbean, in 2004.

I had been working for a Basic Skills Agency in Nottingham, doing marketing, publicity and outreach when a friend who was working at the Montserrat Volcano Observatory invited me out to Montserrat on holiday in June 2004.Within 6 months, I had found a property and moved to Montserrat, where I opened a guesthouse with a coffeeshop and continued to do photography.

During the 5 years I ran the guesthouse, I also ran 2 photographic workshops with Canadian photographers and was invited to join the press pool to photograph Charles and Camilla when they visited the island in 2008. Photos from this were used by CBC in Canada and I have written various articles, with photos, about Montserrat for UK magazines.

There are approximately 5000 people in Montserrat, only 1000 Montserratians and the rest are expats and other peoples from the Caribbean and Guyana. There are, however, approximately 40,000 goats, so about 1 person to every 10 goats!

Montserrat is a beautiful island and can be a fun place to live, but it’s also very expensive and can be very frustrating. It takes hours to do anything and is difficult to find the things necessary as most things are imported, mainly from the States. I have never lived anywhere where there is so much gossip, most of it untrue, but then it’s a small island and a lot of people seem to have nothing better to do. I have limited expat and Montserratian friends as they in particular seem to like a good gossip, a lot of my friends are from places like Guyana and they have a different perspective.

It’s very corrupt here, a lot of UK money has gone into the island and a lot has disappeared, unaccounted for, while 90% of the population are left to grovel in the dirt. The island has bankrupted me twice now, but I prefer to live somewhere I like and be broke, than bored in the UK. Business is extremely hard, I’ve had a variety of businesses and in 11 years have only seen 1 small foreign business succeed and that is supplemented by overseas work. So life can be quite hard here. Often my cupboards are bare and I had to live on fried unripe bananas for 2 days last year as that was all I had. But I can take consolation in the fact that I am not alone in this situation in Montserrat. However, I can go hiking in the rainforests and mountains, find quiet, deserted beaches, watch turtles nesting at night, and hangout at the rumshops. Also, I am living next to a live volcano which has made life interesting.

Culturally, Montserrat is not Europe, without stating the obvious. Political correctness does not exist in Montserrat and the culture is like something from 50 years ago in Europe. But in some ways, there is a freedom here that does not exist in the UK. However, you are constantly reminded about slavery and there is no aversion to showing hostility to white people from some quarters.

But Montserrat is generally a friendly place and visitors are especially made welcome as people know which side their bread is buttered on. For anyone considering moving to the island, I would say come and rent for a year to get the feel of the place. It is extremely expensive and very hard to do business here. Really, the only way is to secure a job via the UK, or look at teaching if you want to get by financially here. Investment is welcome, however, this translates to something like ‘we want your money but you are not allowed to do business here’.

My latest business venture, apart from continuing with the photography, is ‘Turtle Conservation Montserrat’. I have partnered with one of the Caribbean’s most knowledgeable persons on turtle conservation, who has worked in it for over 30 years and received an MBE for it, John Jeffers, to organise volunteer holidays where volunteers will be trained in turtle conservation. The main nesting season is June to the end of September, then hatchlings start to emerge well into December. We have a hatchery on island which is helping with successful conservation and there are other plans in place to assist this. You can find out more on the website.

As for my future here, I will sit it out for a couple of years, carry on marketing the turtle conservation volunteer holidays, continue to photograph and write.