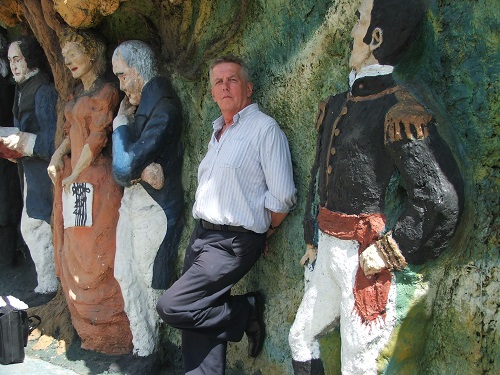 My name is Chris Morvan. I was born 63 years ago in Guernsey, a British island off the coast of north-west France. After going to university in England I stayed there for a few years before moving back home, where I got married and had two sons. I became a journalist, editing magazines and writing for the local paper and further afield.Where, when and why did you move abroad?

The marriage ended after 13 years and after several years on my own, still in Guernsey, I met a Venezuelan woman online (it is highly inconvenient building a relationship 4,000 miles apart but we did it) and we got married in Venezuela in 2009.

With my age counting against me in the UK as far as work was concerned, and my sons old enough to understand, I sold everything I had apart from my CDs and guitar and moved to South America. We lived just outside Caracas and I taught English as a Foreign Language, having done a course online. I was actually teaching before I finished the course, knocking off modules in internet cafes between classes. Initially working for agencies, I soon found my students preferred to deal with me direct, so I started teaching privately, mainly young adults in their offices and, in the case of oil industry people studying in Caracas, in their hotel rooms.

This was just before Venezuela went into serious decline and it was still relatively prosperous and safe. I probably wouldn’t walk the streets of Caracas now, because the country is in trouble – nothing in the shops, people going hungry – and it has become increasingly lawless.

After six months we moved to London to try our luck there. My wife is a consultant paediatrician and we tried to get a visa for her to work there, but it was more difficult than we thought. Eventually she found a job in the Turks and Caicos Islands, where her qualifications were accepted. We had a house right next to a beautiful beach in Grand Turk, the island that is still officially the capital although neighbouring Providenciales is more touristy and prosperous.

I was writing for a Provo-based magazine and had a regular gig playing my guitar and singing in a beachside bar, my wife was the solitary paediatrican in the island and we lived a pretty idyllic life for more than a year, before internal politics in the healthcare system made us want to move.

After a year in Tobago, which was great for me (Tobago correspondent for a Trinidad newspaper, with a column on Sundays, plus other freelance work) but didn’t work out for my wife, again we moved on. This time a contract came up in Suriname, which is on the north coast of South America but considers itself to be part of the Caribbean region, despite not being an island and having no beaches.

Suriname was fine for two years but then the economy collapsed and the local currency fell catastrophically. Now our money is worth much less and prices have risen dramatically, so we’re on the lookout for our next move. One thing about moving is that every time you do it, it costs money. And you always end up leaving something behind, and one or two things get broken in transit. There is accommodation to find, cars to buy, new customs and regulations to get used to. And friends to make.

In Grand Turk when we were there the British government (it’s a British Overseas Territory) had installed an interim government because the real one was so corrupt, so the place was awash with Brits, Americans, Aussies etc, many of them around my age. This gave me the perfect audience at the Sandbar and the island is so small that you can’t help making friends.

Disappointingly, the locals (who call themselves Belongers, which tells you a lot) kept themselves to themselves, but we had an instant group of friends, some of whom we are still in touch with now.

Tobago was very different, and most of the friends I made were through journalism – either other journos or people I interviewed.

It is a similar situation in Suriname, although at least this time we have some local friends, mainly through my wife’s work.

One frustrating thing – and this is true of every part of the Caribbean that I have visited – is a general lack of professionalism. People don’t do what they tell you they’re going to do; they don’t turn up for appointments and if they do, they’re late. They call it being on “Island Time” and it’s supposed to be charming, but if you’re trying to get something done to a deadline it is just irritating. In Grand Turk the magistrate, a surprisingly young British woman, told me she was determined not to lose her sharpness, in case she had to go home again and get back up to speed.

I came to the conclusion that some people were happy to be thought inefficient because it disguised the fact that they were somehow getting extra money out of you through the delay. Here, our residency permits are so slow being renewed that if we leave the country for a break or business reason, we have to pay $35US for a tourist visa on our return.

You just have to put up with it, though. No country likes to be told how to do things better. It just makes you an arrogant Brit or an ugly American.

My advice before you move somewhere is to check it out as much as you can. You may not be able to predict an economic crisis, but you can find out plenty of other things. A woman in Slovenia contacted me recently through an expat organisation because she wanted to start a new life somewhere with her alternative medicine skills and she was thinking about Suriname, so I was able to warn her not to, because it would be a disaster: no money, so no customers and the bureaucracy would thwart her anyway.

On the other hand, if someone wanted a quiet Caribbean island where they speak English, Grand Turk comes with my hearty recommendation.

When we finally get out of Suriname, we’re torn between staying in the tropics (partly to be close to my wife’s family) and going back to the UK. But immigration regulations there are making that difficult.

You can get lucky, and we have certainly had plenty of good times on our travels, but it’s not guaranteed. It’s a funny old world at the moment and if you’re okay where you are, it might be best to stick with it for now.

You can keep up to date with Chris' adventures on his blog, Winding Road.