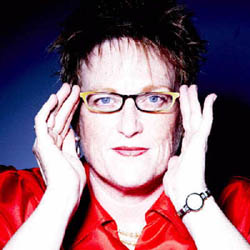 My name is Sally Rose. I blog as The Thorny Rose.

I moved to Santiago, Chile on March 1, 2011, because I had discovered, during a visit here in 2008, that I felt better here than anywhere I’ve ever been or lived. Whatever “it” was, I wanted more of it! (I had always had an idea that I would go overseas to teach English “someday.”)

Because I expect this move to be permanent (well, as permanent as anything ever is in my life!), I divested myself of almost everything I owned.Since I’ll only admit to being 39, I’ll just say that it was 39 years worth of “stuff.” The hardest thing, beyond a doubt, was giving away my 16-year old cat who was too old to make the long journey.

I am renting from the same landlord whom I’ve rented from on previous visits. I found his property on Craigslist. I love the location, but will be moving again, eventually, because this apartment is tiny, more like a hotel suite with a kitchenette than a real “home.”

Have no idea. I do know this: I was living in New York City before this and I can buy an apartment here for probably 1/4 of what a similar one in NYC would cost.

I am semi-retired with an income stream from the US. I am doing volunteer work here which is more difficult to find than it should be.

I’m a very friendly, extroverted person. So I make “friends” easily. Having said that, I find that the Chilean culture is somewhat “closed” to outsiders. It takes awhile to truly integrate, and you have to work at it.

I love the climate. I love the feeling of “magic” everywhere. People might say differently, but I think Chile is full of heart and soul and art and music. I like that people here are “de piel.” They actually are hands-on, kissing each other hello and goodbye. They are extremely family-oriented. (I could probably go on and on in this category. If you need more info, just ask.)

It’s the good news and the bad news. Chilenos are extremely family-oriented, to the point that they are unavailable at night or on the weekends because someone, somewhere, is having a birthday, getting married, has a cold, invited them for “once,” etc. It’s great if you are a part of a family, but for an expat, it can make for lonely times.

In many ways, Santiago is very modern, but in other ways, it reminds me of growing up in Texas. Smoking in bars and restaurants is common. I’m told that there is a law which prohibits it, but it isn’t generally enforced. Being allergic to smoke, this is a downside for me. (Also, the Santiago air quality is terrible, full of smoke and other pollution.)

Like when I was growing up, the downtown stores close on Saturday about 3:00pm, if they open up at all. They’re not open at all on Sundays. There are exceptions (like “big box” stores), but I’m talking in general.

Chilenos are, shall I say, more relaxed about time than this gringa.

As my Spanish teacher told me, “It costs a chileno a lot to say ‘no’.” So, they rarely do it. They have a million ways to “yes” which really don’t mean “yes.” This has caused some confusion and disappointment since I mean “yes” when I say “yes.” It’s taken me awhile to catch onto this one!

If you have a dream, DO IT!

Go and visit first for as long a period as possible. Not by design, because at first I had no idea that I would be moving down here, but I made several month-long visits here before finally moving down. I would suggest this to anyone thinking of relocating overseas. Do an exploratory visit or two.

Don’t be afraid to “give things up” in order to make the move. By simplifying my life, I have gained new “things.” Perhaps not material things, but other than my beloved kitty cat, I don’t miss any of my former “stuff”!

Learn the new language!!!! I can’t stress this enough. Unless you want to be an outsider forever, you’ve got to learn their language.

I will be living in Chile for the foreseeable future, provided that they grant me a residency visa.

I want to find more meaningful volunteer work, make more friends (both expats and chilenos), and generally integrate myself into a contented lifestyle. I’m well on my way!