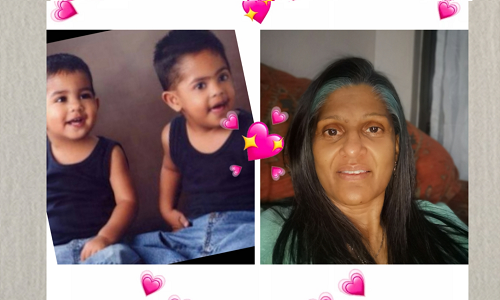 I am Surekha. I am a South African citizen.

We relocated from East London, South Africa to Shanghai, China. My husband then got a job at a university, as a clothing designer lecturer.

The language barrier was a surprise, as the locals spoke only Manderin.  I had to communicate with the locals.  The language is extremely difficult and different. It’s Pinyin based. I was very reluctant to speak too many words, just in case my Pinyin was incorrect. I did learn enough words to get my basic communication and questions across for my needs.

I have a special needs son, who at the time was two years old. When I found a school to take him on, I was informed that the government would not allow him to attend mainstream school, even if he had overcome his milestone delays.  So, he was labelled irrespective of this development.

Mainstream education was difficult to find nearby. It was extremely expensive for a one-year-old. My second son is mainstream, and for kindergarden it was starting from R5000 per month in 2007.  Corporal punishment was part of the Chinese law.  I saw it first-hand when I went to look at the schools. I have heard of it happening to kids. It was extremely inhumane behaviour for an adult to inflict on a child.

We had to use public transportation, and during Christmas and winter it was difficult to get transport. Also, it becomes expensive. Some of the taxi drivers were not open to allowing kids, due to the mess they can make.

Basic reading of written information was a problem, as it was written in Chinese. If there was a situation, we would not know about it.  We had to have a calling card of the location we were going, so the taxi would know our destination. Lots of calling cards.

Healthcare did not follow Western measures of care. To find healthcare was a problem. The expat facilities were not easy to find and were extremely expensive.

Pollution was also a problem. I was not used to seeing grey skies.  I was breathing it in, and I could taste the dust. When I washed my mouth, I would spit out dark grey saliva. It was the pollution!!!

Certain foods were limited, such as mutton and grains. Expat shops were very expensive. Even the kids’ milk bottles – we could not get the dummies replaced. Unfortunately, the kids were so used to their bottles we could not change them. So I had to research and Google where I could get them from, so our helper could get it for me. The location was 40km away.

Did you need to obtain a visa, residency permit or work permit?

My ex had to get visas when we left, when we were there the company obtained the visas for all of us.

To get the visas in SA before we left was easy. But when we needed to renew them, the company forgot. We had to get a person in SA to sort and courier us the unabridged birth certificates for our sons. I had to go to our embassy to fetch it or stamp it. I can’t remember. Then we needed to go to the airport with a translator to sort out the documents. It was rushed, and with two small kids, it was difficult. It took the whole day to sort out. Plus, it took time and money to get the first half of the documents sent to us. They did not inform my ex we had to have unabridged birth certificates.

Certain food stuff and traveling were expensive. The local foods were not expensive. The food was very tasty and unusual. In general, the cost of living was manageable. The rental was R5000 per month for a three-bedroom apartment.  This will be the price for a house in South Africa in 2007.

Yes, it was. We needed a translator, who we hired from the university, to assist with the language.

My ex went before me. The school had a list of real-estate agents, who took him around to view the apartments. He chose based on what I liked and to accommodate our family needs. He chose an apartment that was walking distance from his work and amenities. So, we did not need transportation that much.

Yes. There was an expat community. They were mostly Indians from India. They were in China for many years and had established themselves there.  I needed to settle first. I did meet and communicate with them.  It was not a space I was wanting to be a part of.  Plus, my ex-work colleagues were mostly expats from different countries. We mainly associated and socialised with them.  I celebrated my first Halloween with staff. It was exciting and different. We did not celebrate this in South Africa. We did Guy Fawkes.

It was mixed. I found the young ones were very obnoxious to foreigners and behaved as if they did not understand what I was asking. Some were very happy when I spoke to them in their language. It was broken, but they understood what I was saying.  I felt they did not mind anyone’s business. Very cosmopolitan and fashionable.

Lots of family outings. The parks were full on weekdays and weekends. They were astounded by my sons. They were two and three years old, with big eyes and long eyelashes.  When we went out, we had to watch the boys. The locals would take pics with them. It was very safe and free to be there.

I am back in SA, for all the issues I had for my kids’ developments. Coming back home was an extremely positive move for me. My son has overcome all his inabilities and has become very independent. Being home is comfortable.

I did not dislike any part of it. It was not a space to raise the kind of family I have, with their needs. I feel it is a place for couples, singles, families with more grown-up children, or staff in companies that offer relocation packages. They will have all the checks and balances in place. I would not have experienced my issues.

I do miss China, especially the freedom of living and the innovative products they have.  With Covid-19, I’m not sure how life is there now.

Communication and language. Most important is understanding my rights from a law point of view.

To do more research before they relocate to any place, even if it’s in your own home country. I have relocated twice with South Africa. The adjustment for me the first time was difficult, but now I am resilient to relocating. I will make the best of my situation the next time I am given the opportunity.

Now my kids are 16 and 17.  The world is my oyster.  I am making the best of it, working out my challengers and seizing my opportunities. If relocation is on the cards, then yes, I will do it again.