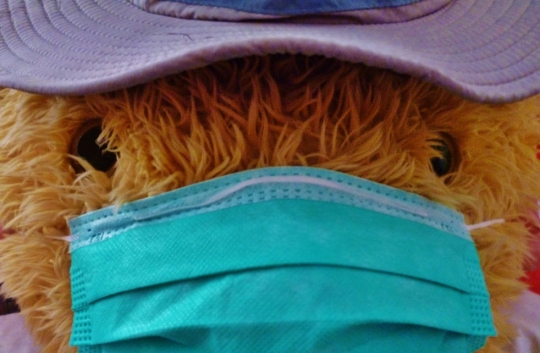 Forget the likes of Lagerfeld, Gaultier, and McQueen, for this year’s Spring Collection has been effortlessly upstaged, of course you all know this, by something a little less glam. Indeed, influenced by a pumped-up, purple pathogen with suckers, not unlike a psychedelic Sputnik or WW2-era sea mine, the world’s facial fashion-sense this season seems all about shielding as much head as possible in the hope of staying alive long enough to contemplate next year’s wardrobe.Yes, facemasks, goggles and hats are all the rage as we go about our business desperate to avoid a big sloppy smacker from the Purple One. Most manage it, some don’t. It’s now de rigueur to protect all orifices, well, almost all; experts suggesting that mouth, eyes and even the mop on our head all constitute likely entry points. The seriously minded take no risks, fully PPE-kitted out for the nine-to-five as if the office had overnight assumed the noxious pong of the city’s main sewer. Sartorial elegance has thus sadly taken a dive, seemingly quite literally in some cases, as long lost swimming goggles and scuba masks hit the streets – it doesn’t quite wash with chic fashion or business attire, but nobody’s judging.

On the whole, here in Hong Kong, we haven’t done too badly considering our geographical location at the arse-end of China, so to speak. A lot of this I believe is due to the territory’s previous run-in with the SARS virus back in 2003; consequently we all know the ropes. Nowadays China has only to sniffle, cough or fart and alarm bells ring frantically out, and that’s exactly what happened this January, just before Chinese New Year to be precise.

What this means in real terms is that the moment a potential contagion of any sort is announced, or leaked out, from across the border, port entry checks are immediately introduced to sieve out all those unsuspecting travellers who might be feeling a little unwell, or in this case hot, bothered and decidedly feverish. It’s not a case of sniffing sweaty armpits or deftly indulging a little rectal thermometry, no, these checks utilise hi-tech electronic temperature sensors tricky for anyone to dodge. This action is not random – it intensely targets every single incomer at every single port, it’s what happened during the SARS outbreak and it’s happening again now. In addition to this speedy precaution, quarantine camps are also readied to house any potential carriers thus nabbed; so, all in all, not a bad initial response. This quick action incidentally is thankfully regarded as a life saver here.

You have to bear in mind also that such speedy precautions were implemented almost immediately after six months of explosive civil unrest which left Hong Kong, government, citizens and the services, significantly battle wearied and not particularly in the mood for another exhausting confrontation, especially against one you can’t even see.

All things considered then we’ve done a capable job of containing the virus, especially after several border crossings were sealed. The only criticism appears to be that this could have been more total in scope as well as actioned a little sooner, the government’s belated decision strongly encouraged by a strike threat from our angry medical sector inundated with infected mainlanders crossing the border for treatment in Hong Kong. Nevertheless, infection rates afterwards soon steadied at 200-300 with only four deaths, sad though they were.

We actually thought back in February that we had the spikey, purple buggers under control and indeed it looked like we had. Unfortunately no one had bargained on a second wave of woe fed by a considerable number of unwittingly infected returnees, mostly students from America and Europe. This has since driven up the numbers here, as I write, to 973 infected with no further deaths, still a commendable tally if it’s not too insensitive to say so.

If any good points can be dragged out of this whole sorry affair, for me it would be the professionalism of the Health Authority and, in particular, the competent delivery during daily press briefings by Dr Chuang Shuk-kwan, Head of the Communicable Disease Branch of the Centre for Health Protection of the Department of Health. These briefings necessitate updates with infection links and paths, typically how patient number 62 is the paid driver of patient number 22, or patient number 73 is the mother-in-law of patient number 45, and patient number 132 had been having lunch with patients 128 and 129, and so on; by the way, before any keen pedants write in to correct me, I have arbitrarily invented these cases and numbers purely for demonstration. Anyway, every case is clearly mapped out with unquestionable medical forensics to trace all possible patient contacts and I for one could not help but be impressed. Admittedly, the current batch of returnees have somewhat muddied the waters, their contagion route being relatively unknown.

Less good, and certainly less impressive, would be the dumb panic buying which ensued shortly after, well, shortly after what I cannot say for sure, probably some tittle-tattle put out regarding imminent shortages of essential commodities. Fortunately short-lived, we were treated to the ridiculous carry on of shepherdless sheep queuing overnight to grab facemasks for starters. Thereafter, off the shelves flew rice, noodles, desanitizers, tissues and toilet rolls despite stores and manufacturers stressing abundant supplies. Baa, baa, baa. Sadly we do not yet have an electronic scanner to detect embarrassing human stupidity, perhaps one day…

Fortunately, only a few days passed before people woke up and realised the pointlessness of it all. Talking of idiots, we also witnessed some twerps breaking home quarantine conditions, thus preferring freedom to social responsibility; I doubt they’ll be doing it again in a hurry however, not even smart enough to conceal a government applied electronic monitoring tag they were soon spotted by members of a hawk-eyed public, shamed on social media and ultimately dobbed in.

When speaking of our troubles incidentally, I was going to entitle this article Here We Go Again! As a phrase, it could be applied aptly to the past twelve months in Hong Kong. Firstly, there’s this re-emergence of a severe respiratory disease which we experienced, as mentioned earlier, back in 2003 under the previous moniker of SARS. So once again, it bore the hallmarks of another nightmare scenario featuring facemasks galore, unemployment, untold misery and a wrecked economy to rescue.

Secondly, back in September you might recall I wrote how that uncomfortable social unrest had driven us to learn a whole new line in revolutionary vocab current language books had thus far failed to address. Well, Here We Go Again! because along comes another new line in vocab this time referencing public health issues, think: pneumonia, facemask (riot revision!), sanitizer, quarantine, social distancing etc. On the bright side accurate pronunciation this time is mutually irrelevant as nobody can anyway comprehend the muffled spiel emanating from behind a germ warfare-grade mask. ‘Shall we eat?’ I was one day asked, ‘Smell me feet?’ was what I understood to have been said, and on it goes – you can imagine.

Joking aside of course, the virus, or COVID-19 I should say, has spread globally and many countries are really struggling at containment and treatment, it also seems to be targeting all sorts not only the elderly or folk bearing an underlying health condition as originally assured; it’s painful to watch and from wherever in the world you are reading this I sincerely hope that you and your family are safe and healthy.

In Hong Kong the spread of the virus has not been as rapid or tragic as some places, personally and for most people, life is now different but not difficult so long as we remain heedful; maybe not going out so often, washing hands frequently when doing so and avoiding crowds; otherwise things continue but with the usual advisory constraints of limiting gatherings to four persons, social distancing, staying out of bars (closed anyway!), observing safe sitting areas in restaurants, frequent temperature checking before entering establishments and the almost compulsory wearing of facemasks; you’ll no doubt be doing similar. 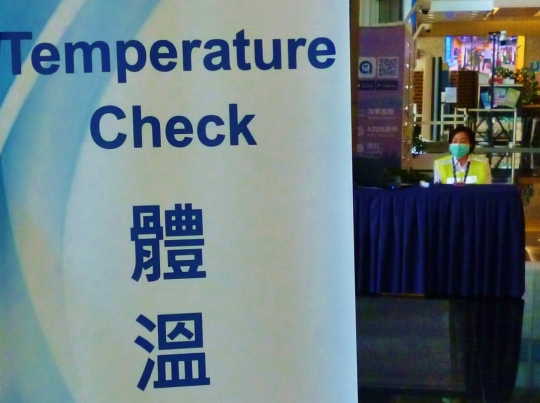 Curiously, one of the interesting societal aspects of wearing a facemask, apart from great discomfort in hot weather, is the difficulty in gauging a person’s humour, their expressions unreadable. Frowning or smiling? We’ll never know, so now it’s all about eye contact and learning to acquire a gaze which expresses good humour, yes, even a warm smile, simply by using ones peepers alone and, who knows, that might yet prove a positive behavioural development. Consistent with that idea, there’s actually a well put-together series of government sponsored TV commercials, airing at present, inspiring wearers to smile behind their masks – and we do!

Nonetheless, many industries are suffering and this may well continue for some time. With Hong Kong’s economy largely dependent on exports, imports, travel and tourism, these sectors have inevitably taken the biggest hit. Consequently, with the future uncertain, airlines, hotels, bars and restaurants endeavour to adapt and survive. Schools have been closed since the end of January and those folk who can work from home are encouraged to do so, there’s no sign of this policy ending anytime soon. Fortunately, the city has good fiscal reserves and we are led to believe that cash rescue packages will be available for all concerned; it’s just a question of how and when. Touching wood, if it’s possible to touch anything safely right now, we seem to have escaped the worst and especially the severe lockdown scenarios in-place elsewhere. Also, the situation in China would appear to be gradually normalising and we remain optimistic that an end might be in sight.

It’s difficult to believe that so much chaos has arisen since we initially heard the TV news reporting, back in December, that several unfortunates had contracted a mystery virus at a nondescript wet market in Wuhan. If in fact they did. Of course, the conspiracy theorists soon leapt to it suggesting this was nothing of the sort; clearly an accidental lab leak is to blame or even a vicious germ planted stealthily by the US military, but no evidence yet on either suggestion. Makes you think though doesn’t it? For the moment it looks likely that in this current viral outbreak wild animals across the border have once again figured, you’ll remember the poor civet cat was fingered for the SARS debacle at the time.

The Chinese government has pledged to crack down on the trade and consumption of such exotic creatures though how successful that will be is anybody’s guess; and anyway, if I remember rightly, our beloved commie cadres spouted similarly seventeen years ago and that clearly worked out well didn’t it? In future then, if you’re feeling hungry up in the Middle Kingdom with a yearning for sweet and sour pangolin or perhaps some deep fried bat’s wings, please don’t; do us all a favour and stick to something a tad more regular like Yeung Chow fried rice or Singapore noodles, and in return I’ll be delighted to join you, cheers!