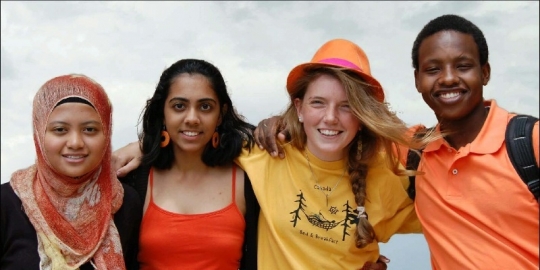 An education from one of America’s universities is highly valuable. Our universities are among the best in the world, with students from all over the globe seeking admittance. But it’s also true that America’s job market is tough. It’s highly competitive and wages are relatively low, meaning grads with student loan debt often find themselves in a desperate situation, whittling away at their debt in a low-paying job.

Enter globalization. You don’t have to live in America to get a degree from one of our universities. And the job market in a foreign country may be just what you’re looking for. The option to expatriate is real, and so is online education.For some students, the state of affairs may be such that getting an education from an American university abroad is an attractive proposition. If that’s you, there are some important things to consider.

Since you can access online education from virtually anywhere with internet service, one of your primary considerations will be the economies of the countries you’re considering. Overall, income equality has been improving in developing countries since the 2000s. These developing nations include places like China, India, and Mexico. In these nations, a person with an advanced degree is likely to fetch a high salary. However, you may want to consider a country with an economy that’s already developed.

For one, a country with a thriving economy is more likely to have a good internet infrastructure. Additionally, a country with a solid economy will have good jobs to offer. Earning your degree online gives you a little more time to work and explore the local culture, because flexibility is one of the big perks of online education.

But the state of an economy is not your only consideration. In tandem with that, there’s the quality of the worklife.

According to Fast Company, if you want to work outside the US in a satisfying environment, consider the following:

Places like Finland, Germany, and Canada also rank well when it comes to work and quality of life. But according to the Washington Post, when it comes to overall considerations for expatriation, Asian countries such as China, Singapore, and Thailand should also be in the mix. Germany and Switzerland also fare well in the overall considerations, as salaries for expats in German-speaking countries are unusually high.

There’s also the consideration of what type work you want to do. If you’re the entrepreneurial type, there’s no doubt America is one of the best countries for you. Looking to found a startup? Worldwide, Washington State University ranks Hong Kong, Canada, Singapore, and Australia as the best places, besides the U.S., in which to do so.

Expatriating isn’t easy, but there are several routes to take that will make working and studying abroad easier. And of course, you don’t have to completely expatriate and give up American citizenship. There are temporary options if you just want to find out what it’s like in a different country.

First, studying abroad. More and more students are taking the study abroad option. Over the course of 10 years, there was a 46 percent increase in U.S. students studying abroad. By 2016, 325,339 students were earning credits overseas. This is a great way for you to learn about another country before you move there.

Or you could volunteer abroad and do service learning. ISA Service Learning and Global Crossroads are organizations that can help you out in this respect.

And, of course, there are study abroad options in just about any university of your choice. But if you want to expatriate, that’s a different story.

In 2014, the cost to expatriate rose by 422 percent, from $450 to $2,350. The State Department chalked the incredibly steep rise up to the extra work they were having to do to process departures. To put that in context, 2012 and 2013 saw a 366 percent rise in the number of people who expatriated. If you want to get out of here, you’re not alone.

The process is relatively simple:

● Go to a foreign country and find a U.S. Consulate or Embassy
● Tell a consular or diplomatic officer you want to expatriate
● Sign a form

That’s it. But here’s the catch: When you renounce, wherever you renounce your citizenship, you’ll have to hand over your passport and will be stateless, unless you already have citizenship in another country. This will make it hard to travel, meaning you’d most likely have to stay in that country. Instead, you’ll want to choose the country where you’d like to live first. Then, either look into obtaining a work visa, or study abroad there. Next, apply for dual citizenship. After that you’ll be in a secure place to expatriate.