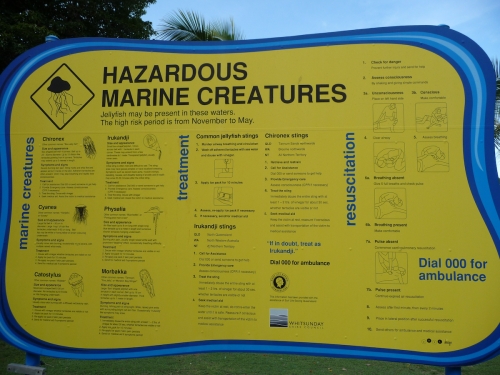 I read every article on local geography I could get my hands on before my first visit. Being in close proximity to a number of Aussies brought me a wealth of additional information. The only difficulty was sorting fact from fiction. One couple provided in-depth information on the pros and cons of the inner and outer Great Barrier Reef sections. Another implied that Queensland was practically riddled with “salties”−giant saltwater crocodiles−and even the birds were known for their precise dive-bombing skills. While the latter is no doubt true, there are ways of minimizing nearly every wildlife threat, you just have to figure out what they are.During my first stop in Western Australia, I learned about the dreaded Ringtail Snakes and the ferocious Drop Bears. The snake is known for its ability to twist itself into a shape resembling a bicycle wheel to chase after you more quickly. Drop Bears are the not-so-cuddly cousin of the koala, equipped with vampire fangs and known to drop from Eucalyptus trees onto unwitting victims. Both species are known to specifically target tourists. I gave these stories a millisecond of credibility before I figured out that these wild tales were an example of the well-known Aussie sense of humor, but regardless, Googling “drop bears” provided decent entertainment.

When I relocated Down Under a few years later, I was a kid in a candy store. A lover of outdoor adventure, I could barely be contained. There was so much to explore and I often went solo. On South Australia’s Kangaroo Island, one of the most pristine wildlife habitats I have seen on this planet, I enjoyed a rocky coastal walk. Lost in my attempt to photograph dolphin pods along the shoreline and the notoriously shy Black Cockatoo, I failed to watch were I was going. The black mossy rocks could have been an oil slick for all the footing I could gain. I was on my backside in seconds. Being alone in Australia means being alone−as in not a soul to be seen for miles. Had I struck my head on those rocks, I would have floated out to see without anyone the wiser. I made myself a mental note to be more careful.

In my home state of Queensland, the magnificent beaches are magnetic. Few can resist them for long. I plunged into the Sunshine Coast waters every chance I could, only learning about the numerous species of evil jellyfish after the fact. They range from the barely visible but lethal Irukandji to the rare but insanely deadly Box Jellyfish−capable of killing 60 men in one go. Learning this, more notes were added to my growing tome of Australian outdoor code-of-conduct.

Eventually, with a few Australian years under my belt, I began to think, “I’ve got this!” I knew in what month the “jellies” would invade our beaches. I had seen two of the deadliest species of snakes in Australia, the Red-Bellied Black Snake and the Eastern Brown, and lived to tell the tales. I knew when torrential rain, known efficiently as the Big Wet, could be relied on to spoil outdoor fun. I believed I had the hang of it. When my good friend visited from New Jersey, I had to show her the best we had to offer.

We rented a small powerboat to cruise the Noosa River. When it comes to boating, I would always prefer to be in the water rather than on it, so before long, the boat was pulled onto a small beach and I was plunging in headfirst. Perhaps it was the insane Queensland heat, but I took no notice of a few key factors in my haste. One, we were quite close to a gap in the shoreline that led into the ocean. Two, the high winds that day had whipped up a serious current. I had heard the word “riptide” but didn’t know exactly what it meant. I was about to learn that lesson.

My savior was a calm bearded Kiwi in a “tinny”, an aluminum dinghy. He called out, “Are you in trouble?” and miraculously understood my affirmative garbled reply. Within minutes, he was instructing me to grab hold of the side of the boat and was pulling me ashore. After I thanked him profusely, all he said was “No worries. I don’t like fishing much anyway.”

Notes to Self: When sucked into a rip, stop trying to fight it and let it pull you to where it wants to. Otherwise, you expend your energy fighting it and will quickly exhaust yourself and drown.

Nearly five years into this game, my notes could fill a book. I‘ve never lived anywhere where there are so many possible ways to do yourself in and so many creatures willing to assist you. Nonetheless, I’ve never had so much joyful adventure anywhere else either. Let Darwinian Law reign supreme because if I go, at least I’ll go happy−no doubt with an Aussie nearby trying to turn my demise into his next favorite joke.