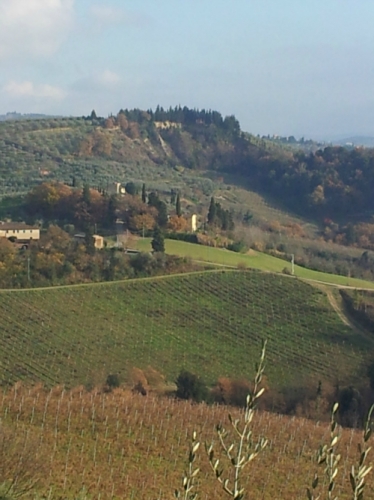 December 2015 in our little bit of Chianti in Tuscany, proved to be a most unusual month and we are not just talking about the weather. The temperature remained above normal and it felt very much like the end of September through to November. Autumn colours were everywhere, not least the small leaved oak trees that grow wild and thick in this area, hanging on to their golden leaves until the new shoots push their way through in early spring.Mind you the way things are going, it would not surprise me if spring arrived in February this year.

Of course, we are blessed with lots of evergreens including the silver green of the olives, and the dark greens of the firs and cypress. The countryside is never bleak in winter. In December, the Italians had bought their Christmas trees early in the month and unfortunately we were too late to buy one locally. So for the first year ever I had to persuade a local garden shop to dismantle their Christmas display and sell me their realistic looking false tree!

Unfortunately, our local town of Certaldo had once again imported a giant tree from northern Europe, which looked ready to drop the minute it was erected. Now the Italian towns don’t really come alive until the early evenings and I was relieved to see that after dark the tree looked very attractive with its shimmering white lights.

Christmas markets started early in the month, the most popular and spectacular being in Florence and Siena. Amazingly, every year the Germans arrive in Florence with their wonderful festive stalls and the Italians flock to see it. Locally, the markets are less grand but nevertheless some lovely hand-made decorations and presents can be found. I bought a ten inch high owl made out of local twigs and grasses, which went into my Christmas display at the villa. Meanwhile, the local children were hugely excited to find a new ice-rink opening outside the elementary school in Certaldo.

And talking about the villa, we managed to enjoy several lunches on the upper terrace during that balmy month, although the evenings were cool enough to demand a log fire.

Then, back at Laura’s Bar/alimentare in Fiano, my man announced that he was going on a diet in the run up to Christmas. “Look at his!” He smiled, “It’s a really small pastry; I’ll stick to these for breakfast from now on.” I smiled back and watched him slowly eat his chocolate covered cream filled treat. No, don’t laugh, you should see the size of the pastries he normally eats!

As you already know, we always start the day with coffee at a local café bar, more often than not in Certaldo. We particularly like Bar Solferino in the main piazza and jam Café next to the railway station. Both are great for watching the world go by whilst reading the local papers. Now there is a definite pecking order for reading the in-house newspaper. If you are liked by certain locals, they will hand the paper to you as soon as they finish it. I am glad to say that my man and I are very popular, so we never have to wait long. But the men and occasional woman, who really want the paper and don’t have such an understanding, will hover over the reader looking agitated just like an Italian driver almost bouncing off your rear bumper when he wants to overtake!

Meanwhile, for all those fans of Silvio Berlusconi, you may want to know that in December he went into hospital in Rome to get his battery changed! Well, who’d have thought it, I could have sworn he was flesh and blood, but you never can tell these days. Robots everywhere!

Well enough of that. It’s now mid-January and Expat Focus is waiting to receive this column and the deadline is tomorrow! Whoops!

Have a great month and don’t forget to check out my author site for your winter reading.