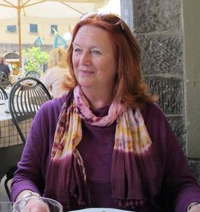 As I write this column, the sun is pouring through the open studio window and there is nothing like it for being inspired to write. February was a month full of surprises and in particular the early blossoming of spring flowers and trees. We have a beautiful mimosa tree and by mid-month it was in full golden yellow blossom, which was lovely, however, did not bode well for the traditional gifting of the flowers, not due until March 8th on Festa Della Donna. By mid-month, temperatures rose as high as 17º centigrade (around 62º Fahrenheit).

Back in our local village of Fiano, the month included a visit from the carabinieri (police), following an incident in the piazza leaving a lot of broken glass.One of our favourite locals arrived in the café bar next morning with one arm missing from his spectacles and promptly sent out one of his many lady friends to the local Moroccan street seller, to get another pair

Now we are not pointing a finger, because Fiano’s piazza has a decidedly noisy club atmosphere at night, so this broken glass incident probably happened after dark, when our local friend was most likely tucked up in bed. Meanwhile, the Post Office’s national computer network broke down on pension day, which meant that the oldies’ queue in Fiano went all the way down the main road.

As you all know, February 14th was San Valentino’s Day, and it is celebrated much the same in Italy. Italian men are all over their ‘Amores’, until they marry them of course. I decided to make a special meal for my man (who is English by the way) and fished out my rather musty 1973 readers digest cookbook. I thought that a Mushroom Stroganoff was just the thing and followed the instructions meticulously. Unfortunately, the half teaspoon of Italian mixed herbs was substantially hotter than the old English version and my man had smoke coming out of his ears! Then I produced a lovely creamy desert with a rose petal sauce. My man took one mouthful and said ‘I love the smell of roses June, but I really can’t eat this; I know you have tried really hard, I’m sorry.” Bless him, he was not complaining, just being honest and of course he was right. So two failures, but that’s just me all over, a complete disaster in the kitchen. Thank god for all the lovely local ristorante (restaurants)! So, we opened a new bottle of Vin Santo and downed two glasses each in quick succession and then played a game of ‘Sorry’. The following morning, the locals in Laura’s bar thought my man’s description of my cooking was hilarious! I don’t really mind being laughed at, I was laughing too, but secretly I would love to be up to the amazing culinary talents displayed by some of my blogging friends.
You may be wondering how Farty Barty the cat is faring. To be honest, he is so busy doing his own wild thing that we only see him fleetingly when his hunger gets the better of him. He has his own agenda, which includes a string of girlies!

And so to the other gorgeous man in my life, Silvio Berlusconi. You may be aware that it has been all change on the political front. We have a new Prime Minister, the younger and very handsome Matteo Renzie, the former Mayor of Florence (Firenze) who seems to be very popular with the girlies, and most of the men! We live in the Provincia di Firenze, so you can imagine how impressed the locals are particularly as they all support the Fiorentina Football team! It is also a very young government, just a couple of members in their sixties and the majority in their thirties and forties. Seventy-six year old SB has no doubt had his nose put out of joint. He is unhappy with his former partner Angelino Alfano, who was invited to join the coalition party, and is complaining that the new members have not been elected, which is undemocratic! Meanwhile, Silvio gets richer, but his status diminishes. Poor SB, we still love you.

Well, must get on with the day job, have a great month and see you all next time…