Benvenuti to my monthly column from Beautiful Tuscany.

As always I like to reflect back to the previous month, in this case February, and tell you about all the happenings in my little bit of Chianti, and sometimes snippets from other parts of Italy.

Early in the month, my man and I were enjoying morning coffee in Bar Il Solferino in Certaldo, when he noticed something in the newspaper.“Hey, look at this!” He enthused. “A private art collection has been discovered by that really interesting artist Giorgio De Chirico, you know, he was a symbolist or something similar, back in the 1920’s.” We both really like that style so I jot down the website address. There is to be an exhibition in Ferrara, but it’s a little too far away for us to visit. 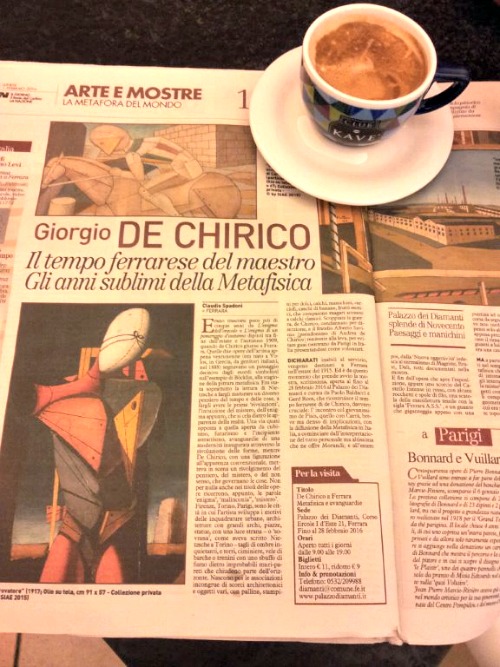 Now, in the part of the paper I was reading, there was an article on female aging rock singers. No, I wasn’t included, but that’s probably because I have not been discovered yet and am only famous in Certaldo and our local village of Fiano. There is a picture of the stunning big blond haired Patty Pravo who looks fantastic at sixty seven. It’s amazing that I had to come to Italy to find that aging rock bands are still hugely popular, which suits me of course. On the subject of aging rockers, former Queen lead guitarist Brian May has been strutting his stuff, as has Bruce Springsteen, also known as The Boss. If you want to go to a concert in Italy you will be very lucky to get a ticket, as they sell out even before the official box office opening day!

In addition to being music lovers, the Italians are a creative lot and that goes for film making and fashion. As regards the former, fifty-two year old Gianfranco Rosi just won the Documentary Golden Bear Award in Berlin for his filming of the dreadful plight of thousands of terrified people seeking safety on ours, and other Mediterranean shores. Bravo to him. 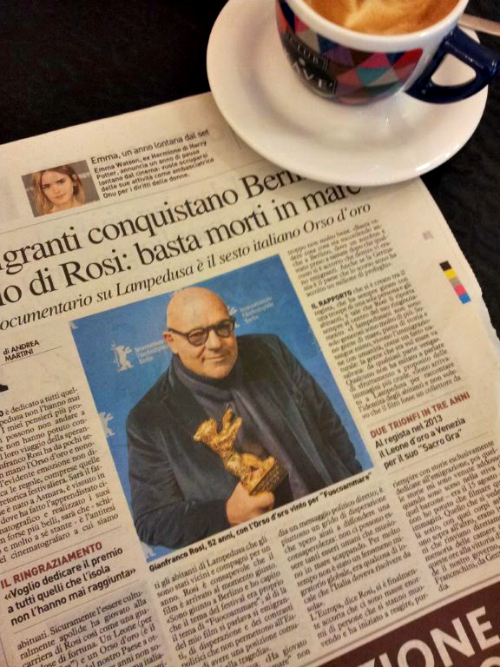 Meanwhile, back at Sandra’s, my wonderful hairdressers, I read the glossy magazines and drool over the wonderful Italian fashion designs including Giorgio Armani, pictured at eighty something, with his line-up of dark-haired Italian beauties at the Milan Fashion week, and Roccobarocco who has designed a gorgeous dress and matching handbag to die for. I just can’t get enough handbags, and my man has to virtually drag me out of the market in Certaldo by the hair, to keep me away from the Italian hand-made bags and scarves! Life can be hard here….

But what else? Oh, how could I forget Valentine’s day or in Italiano, La Festa di Valentino. The Italians are big on amore, well that is until they get married. I’m not so sure about this idea that Italian men are great lovers, not that I have any experience. Perhaps further south, but in Tuscany once the men are married they fob off the idea that they should still be romantic. Perhaps it’s because having both his wife and mother living at home, arguing over whether his underpants should be ironed or not, rather cools the ardour!

Well, enough of that. Back in Fiano, our local village, we discover that the bar/alimentare has closed for good and there was no longer anywhere to get a cup of coffee. So, for now, you will generally find us in Certaldo. To ring the changes, I popped into a new bar, which had opened a few months ago, called Garibaldi 11 Speakeasy! Yes, I thought that was an odd name too. It turned out to be very rustic and pubby, with a big sofa at the back for lounging on. The customers were young and arty, which was quite nice and Evi, behind the bar, was pretty and welcoming. She made me a huge jug of a mug of caffé latte with two shots of espresso in it, as I like my coffee strong. I don’t normally like big mugs, but it was a nice mix. So here was another alternative coffee shop, particularly for Mondays when Bar Solferino is closed. As regards Fiano, I may now have some good news for my next column – watch this space!

Well, finally, at the end of the month, I read in the paper that a new museum has opened in Palermo, celebrating the Mafia! ‘What!’ I hear you say. Yes, it’s true and quite honestly it’s not as amazing as it sounds as the Italians do have a liking for the macabre. You’ve only got to visit the Museum of Torture in San Gimignano to realise that. Parents and children here seem to be unfazed by it all!

Well, time to think about lunch. It’s Saturday today, and the sun is shining, just not quite warm enough for pranzo in the garden. But hey ho, life eeez good, life eeez now!

Have a great month and remember, I do love to hear from you.
Salute June x