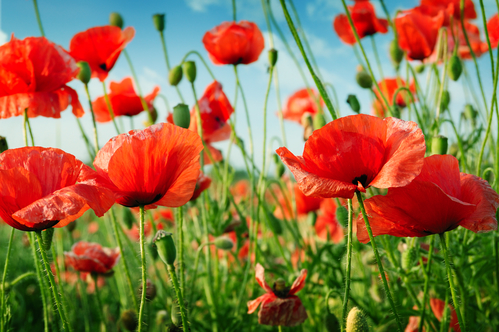 If you are new to this column I should tell you that each month I reflect back on the previous one, which in this case is May 2018. My aim is to bring you lots of fun things, and not too many serious ones.May is arguably the most beautiful month of the year here in our little bit of Chianti. Arguably, because all the seasons are stunning and it would be unfair to lessen the appeal of other months. But it is the month when the roses leap into bloom and the hedgerows are thick with wild poppies. And it is the month for visiting artists as the light is spectacular with three dimensional views in every direction. It is also the month before the zanzari (mosquitos) arrive, so one can safely spend the evenings outside!

“The Rose is Out!” It was early in the month and my man came rushing in, waxing lyrical about our English red rose. Now what is exciting about a rose being out? You may ask. Well, this rose, my friends, is very special rose indeed. In 2004 we packed our whole life up into a furniture van and loaded up our car, in readiness for our journey of no return with Bosun the dog, to Italy. The last thing to go in the van was a metal dustbin into which my man had put some of his tools. We took a last look around and then I saw the rose, a beautiful red English climbing rose that had really taken root and was climbing up the front of our old farmhouse. “I can’t leave the rose behind” I whined. So over fourteen years, we moved five times and in each garden we planted the rose. Somehow it survived, not very well I have to say, but now it’s liking its current position and is blooming! Praise the Gods!

Fascinating insect life was also arriving, including a giant Sawyer Beetle, which settled on our outside airer. What a privilege to see such a stunning creature up close. Over the next seven days we also saw the arrival of Swifts, a cuckoo and heard the Bee Eaters but had yet to see them. So, summer was virtually ready to go!

Now, you may be aware that my man and I do like to go to our local village of Fiano for coffee every morning and catch up with the local and national newspapers. Early in the month, I came across an article about the lovely American Ninalee Craig, who became famous for her iconic photo taken by Ruth Orkin in August 1951, walking through a group of lustful Italian men, in La Piazza Della Repubblica in Florence. Look at the guy on the scooter to the right and the guy to her right is clutching his vitals! Almost hidden on the left is a very handsome man at a table; was she going to meet him? So good-bye to Ninalee who died on 1st May, but never to be forgotten! Google “Ninalee Craig” for the photo.

Meanwhile, in a nearby town called Montespertoli, they were gearing up for the annual Wine Festival. It opened on 25th May and is always really worth a visit. You can even hire a Horse and Wagon excursion around the vineyards for wine tasting! And on the subject of wine, did you know that one hundred and sixty-two thousand tourists visit Italy every year and consume seventy-three thousand bottles of vino rosso (red wine)? The bulk of these visitors are American, German and French. Well, I wonder how they come up with those figures, but anyway, that’s a lot! Then there’s also the Brits that are increasing in numbers each year, bless them!

We also had local elections in May. Silvio Berlusconi attempted a dramatic return and failed. And, the two largest parties in government could not agree to work together, so we continued to be ungoverned.

And, back in our beautiful converted monastery farmhouse, I was already getting wrapped up in my preparations for my annual rock concert, so the political news kind of washed over me. Read all about the concert next month! These hills are full of musicians, writers and painters and if you want to bury yourself in the sights and sounds of Tuscany, this is the place to be.

Have a great June and I’ll see you next month.