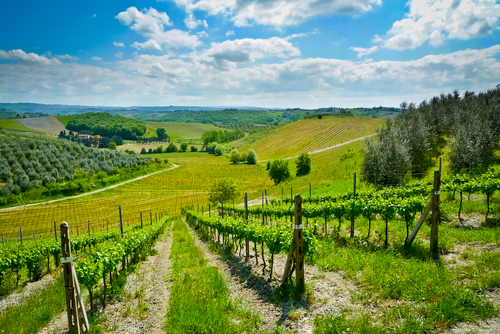 If you are new to this column I should tell you that each month I reflect back on the previous one, which in this case is March 2018. My aim is to bring you lots of fun things, and not too many serious ones.If you had visited in March this year, you would have been forgiven for thinking you had arrived in mid-winter. Spring peeped out in the first week with the Mimosa in full blossom, then it snowed. Not only snow, but really freezing temperatures that destroyed young trees and plants alike. We lost our three young Mimosas and several Oleanders. A friend in the States was thinking about coming to Tuscany in March, as she thought it would be much warmer than in her part of the world, I had to warn her off!

Then, to further chill us to the bone, we were bombarded with political hype, as confused voters went to the polling stations for the General Election. There has been a massive amount of unrest in the country for some years and it came as no surprise when The Five-Star Movement got the most votes, but not enough to form a parliament. So, ever since then, we have been reading about coalitions that would never work and now talk of a new election. Hey ho. Meanwhile, it seems the Peter Pan of politics, our smooth talking ladies’ man Silvio Berlusconi, has his eye on the Presidency. That’s not the Prime Minister’s position, more a figurehead with the power to overrule things he does not agree with.

But enough of that. We must move on to brighter things and I won’t be mentioning the Six Nations’ Rugby results!

So let’s talk about Music, which as you know is a subject very close to my heart. Now I only occasionally mention Italian singers and rarely pop singers. So when I tell you that Italy’s own Laura Pausini has released a new album called ‘Fatti Sentiri’ and is off on a world tour, you should prick up your ears! Laura has a passionate and slightly gravelly voice, which she is this year taking around the globe at the age of forty-four. She has been around for a few years here, but now things are really taking off for her and she has my full support and best wishes for what will be an exciting if gruelling few months. Laura's site

I also read in the paper that Mick Jagger’s younger brother Chris was in Italy for four concerts. Chris Jagger, singer, musician, writer, actor and journalist, tours from time to time, with his trio Acoustic Roots. Pity, I didn’t know he was here until afterwards! Visit his website here

Meanwhile, and a surprise to we locals, the town of Certaldo was busy formulating its very own Wedding Package as part of its new Tourism Campaign. We do have a number of wedding planners in Tuscany and Certaldo Alto, the hill-top historical centre (centro storica), has always been hugely popular with Brits wanting to tie the knot. So it will be interesting to see what emerges. I have to say that once you visit Certaldo Alto, you will understand why it is so popular. When I have more information I’ll let you know. For now, why not visit the town’s website.

Anyway, what with the weather still being pretty cold at the end of the month, my man made an announcement. “I fancy one of those wide-brimmed Italian hats,” he announced. “You know, similar to the guy in the Moretti Beer adverts.” “You mean a Mafia style hat?” I asked, just to be sure. “Err, not exactly, but black and wide brimmed.” He mused. So I set about researching Italian hats and found that Florence had a famous artisan hat-maker called Borsalino. Now, like Italian hand-made shoes, you cannot buy a hand-crafted hat cheaply. But what you get is a thing of beauty and of a very high quality and style. So sometime in April, I might take him into Florence and visit Borsalino at Via Porta Rosso 40, 50123, Firenze. (Florence)
It will also be an excuse to have lunch at my favourite Gluten Free Ristorante, Quinoa.

So anyway, I hope you have enjoyed my ramblings and you can always drop me a line if you have any questions about Tuscany, particularly our little bit in the Commune di Certaldo.

Have a great April and see you in May.