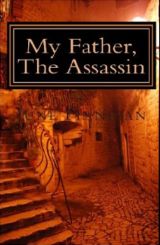 Expat Focus talks to June Finnigan about her first novel ‘My Father, The Assassin’ – the first of a trilogy. June writes her stories in a villa overlooking the Chianti hills in Tuscany, with Barty her grey tiger cat curled upon her lap or purring close by.

June, please tell us a little about yourself.

My mother was the daughter of wealthy middle class parents and my father was a Romany Gypsy. They married, despite all objections from my maternal grandparents and as anticipated, the union turned out to be a horrible mismatch. I was conceived in a Devon field and born the following June 1951 in the local midwife’s cottage next to Exmouth railway station.Ever since, I have had a fascination for steam trains and the open road. Compulsive reading in the 50’s included ‘The Famous Five’ and ‘Swallows and Amazons’. I also read copious library books about the Resistance in France. I wanted to be a secret agent. In the 60’s I read the Bible from cover to cover, then Erich Von Daniken’s ‘Return to the Stars’ put religion into a better perspective. I was also fascinated by the ancient Egyptians and the Aztecs, Incas and Mayans and read a lot of science fiction including Aldous Huxley and H.G.Wells. I generally choose thrillers to read, particularly those that include the Cold War or modern espionage. I still love science fiction and have tentatively started a children’s novel in this genre. I have written numerous short stories and poetry, for both adults and children. I will eventually publish these; much of it is still handwritten. ‘My Father, The Assassin’ is my first published novel. It was an attempt to put the ghost of my father to bed and to satisfy my thirst for adventure.

I have started a follow up called ‘The Bolivian Connection’ with the same heroine. A third adventure will be based in Italy. I am happily married to Paul, my love interest and best friend, and have a daughter and two grandchildren. I write my stories in a lovely villa overlooking the Chianti Hills in Tuscany. Farty Barty the grey tiger cat is usually curled up on my lap or purring nearby. A glass of local Chianti wine is always in easy reach.

What do you like/dislike about expat life?

I love being an ex-pat in Tuscany, Italy, so much so, that we have been here for ten years. There is nothing to dislike, other than the drivers and the long queues at the post office and banks. The obvious things to like here are the restaurants, markets, history, architecture, and the Italian lifestyle, which is slower, friendlier, and more laid back than northern Europe. There is something very attractive about being a welcome foreigner in a small close-knit Italian community like Fiano and, I admit, being treated as a local celebrity. I have no experience of being an ex-pat anywhere else; however, my thirst for adventure might possibly change this. More than likely, we will travel elsewhere and keep a base in Tuscany.

You recently published ‘My Father, The Assassin’, what is the book about?

On a hot summer’s day and some twenty years after her father’s sudden death, Joanna Wilde is enjoying a cold beer in the shade of a rustic pergola in the Devonshire hills. She is astonished to see a stretch limousine coming slowly to a halt outside her garden gate and is greeted by an elderly and mysterious Malaysian prince who claims to have known her father. Prince Abdullah says that he is searching for a missing diamond and ruby necklace; however, Joanna does not entirely believe him and senses a more sinister reason for his visit. He also claims that her father was in fact a hired assassin and not the drunken man of little consequence who she believed him to be.

Posing as a writer, Joanna follows him to Malaysia and begins to retrace her father’s final years. In Singapore, she is recommended to hire an ex-pat historian as a guide, who turns out to be her former lover and the father of her now twenty five year old daughter Emma! After the initial shock, Dominic agrees to work with her; however, their newfound relationship gets off to a rocky start, as he is strangely hostile and refuses to discuss the past.

Their investigations take them through Malaysia ending up in Dominic’s luxury home in Kuala Lumpur. Previously they had secretly interviewed Abdul, Prince Abdullah’s former batman, after which the poor man’s body is found in the back of Dominic’s jeep with his throat cut. Things get rapidly worse as Joanna gets closer to the truth, she knows that she is risking her own life and those close to her as she gets drawn deeper into a world of ruthless murderers and vengeful relatives….

What type of audience do you feel your book would appeal to?

As the both the author and hero are female, the book is more likely to be bought by women over thirty, who can relate to a main character who is female, successful and also enjoys a bit of romance. However, the book is also a thriller and I have heard from a considerable number of men who have read and enjoyed it!

What inspired you to write My Father, The Assassin,?

I was inspired to write this book whilst enjoying a glass of Pinot Grigio in my farmhouse garden in Devonshire, England. I had wanted to put the ghost of my own father to bed and turning him into a hired assassin seemed like a good idea. The story also helped to satisfy my thirst for adventure.

How did you come up with the title?

The story was all about getting my unhappy memories of my father into something other than reality. He had been an aggressive alcoholic, ‘killing’ any happiness we might have found as a family. He died when I was sixteen. Having written the book, I am now a happy girlie and have put those memories behind me.

What was the hardest part of writing your book?

Dedicating sufficient time. The whole story was in my head for several years, however, I was a weekend writer and running a business during the week.

Do you have any advice to give to aspiring expat writers?

Every day offers up fascinating scenarios. Always carry a notebook, electronic or otherwise, and write down anything that is notable, funny, or otherwise. If you spot an interesting character, make a note. Get into the habit of writing about anything, a blog is a good start. The more you write, the more it will come naturally. By the time I started on a novel, I had written numerous short stories and several poems.

I am well into the follow up to ‘My Father, The Assassin’ called ‘The Bolivian Connection’ and is the continuing adventures of Joanna Wilde. I have a deadline of 31st march to finish the first draft. I will also be performing in my fourth annual Rock Concert in June, with the Rock Chick Band. Therefore, the next few months will include a lot of rehearsal and voice exercise.

What book are you reading now?

Gosh. I always have at least one book on the go. I have just read all four ‘Jack Shepherd’ novels by Jake Needham that I highly recommend to lovers of thrillers, mysteries and the world of money laundering, gun running etc I have just started something completely different called ‘The Hole Opportunity’ by James Minter, which is hilarious. I won his second book ‘A Tunnel is only a Hole on Its Side’ in a competition and downloaded the first one to read in advance.

Write, write, and write. I am a director of a UK based Mergers and Acquisition Team and at some time in the future expect to sell the business and concentrate on writing and rock singing.

Where can people buy your book?

‘My Father, The Assassin’ is available on Amazon as both an ebook and paperback.

June Finnigan is a prolific English Writer of fiction, short stories, and poetry some of which may be found on her website,www.junefinnigan.wordpress.com. She is a Published Author and Rock Singer living in Tuscany, Italy.

She is currently working on her The Italian Connection' a novel based in Italy. The main character, Joanna Wilde, continues her adventures in all three books.