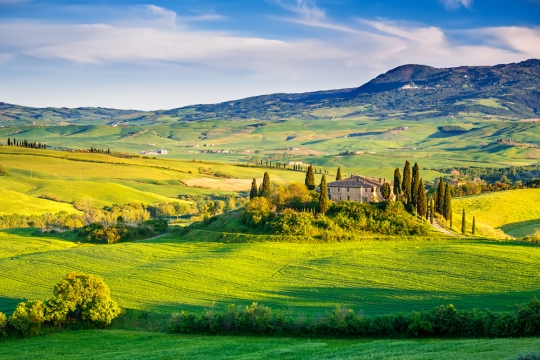 If you are new to this column I should tell you that each month I reflect back on the previous one, which in this case is April 2018. My aim is to bring you lots of fun things, and not too many serious ones.Well, from a weather point of view, April was unpredictable and quite honestly it’s no longer possible to predict anything these days! When we arrived fourteen years ago, the spring was hot and the winter cold, now it’s all over the place. What to do with our Tuscan garden? That was the question. The first week of the month looked very good, so we dashed down to the Saturday morning market and spent a fortune on plants for all our pots that were desperate to come out of the cantina. Over the weekend we managed to get all the planting done and could sit back and enjoy the results with a nice cocktail. Then it rained, and rained some more. But that was OK, it saved us doing a lot of watering. Stars of Jerusalem popped up all over the lawn, the annual display of Fiorentina Irises appeared, the lilac and acacia trees were dripping with blossom and by the end of the month, with a mix of rain and sun, it finally felt like spring!

Meanwhile, out there in the big country that is Italy, the Music Scene was hotting up. Bob Dylan was in Florence on his Italian leg of ‘The Never Ending Tour’. He performed his first tracks seated at the piano, starting with ‘Things have changed’ his voice in excellent form and singing to a packed Mandela Forum.

Ringo Starr, or Sir Richard Henry Starkey, was in the news and is doing a tour in July/August. He will include Lucca, Marostica and Roma. Now I have been to outside concerts in Lucca, which is just over an hour from us, and the setting is fantastic. Open air concerts are held in one of the most beautiful piazzas and the acoustics are amazing. Now, in case you did not know, Ringo does do more than just play the drums; he also sings, acts and paints. It will be interesting to hear the old boy performing, he is seventy-eight, bless him! I think it’s great that so many of the oldies are still performing live, so there’s still hope for me being discovered at a late age and being sent off on tour! Rock on I say. Buy tickets here.

Back in our local village of Fiano, relaxing over coffee and reading the newspapers, I found an article about Sulla Orma Citta Millenaria, that is ‘On the Millennium City Footprint.’ I know, it doesn’t really make sense, so one should not always try to translate literally. What it actually said was, it is a thousand (mille is a thousand in Italian) years ago when the foundations were laid for San Miniato al Monte and other churches in Florence and the surrounding province. A thousand years! Think about it, that’s the year 1,018 AD or the 9th century. These incredibly beautiful buildings were built all that time ago with no electronic or mechanical assistance. Of course Florence is a most stunning atmospheric ancient city, and that’s not just the places of worship. Florence was also the birthplace of Leonardo di Vinci and other illustrious designers and inventors. So, if you have not visited yet, you really should!

What else? Oh yes, we could not ignore that the beautiful Italian actress Claudia Cardianale was celebrating her 80th birthday! Can you believe it? Now, some of you younger readers may not have seen her films that included starring roles in the sixties opposite leading men like Burt Lancaster, Alain Delon, Henry Fonda, Jason Robards, Charles Bronson and Paul Newman. Most of her films are now classics, so look them up! Just like Sophia Loren, Claudia still scrubs up very well indeed. Buon Compleanno to her. Read about Claudia here.

Meanwhile, something else being celebrated last month was the 50th anniversary of La Vespa. That iconic scooter that we all loved seeing in the sixties films and still to be seen today weaving in and out of the traffic in the major Italian cities, and whizzing through the country villages at the weekend, often in big convoys! Tourists can also hire bright red ones in Florence and surrounding areas, so I’m told. Did you ever have a Vespa Scooter or were you a Rocker like me, dangerously hanging off the back of 650 motorbikes? Hey ho! Send me some of your Fotos. Visit Vespa’s site here.

With the weather being a little warmer, we returned to Montespertoli, a pretty nearby town, for aperitivi and the greeting of old friends. One friend is the lovely Caterina, or I should say The Baroness Caterina de Renzis Sonnino. Caterina is a very hardworking lady who entertains guests from all over the world giving guided historical tours of Il Castello, Educational visits and Wine tastings. Mid-month the newspaper printed an article about a visit by Gucci, the Label having chosen Il Castello Sonnino as one of seven cultural projects. Now, I will try to find out a lot more when I next speak to Caterina, but in the meantime you should visit Il Castello’s website. My man and I were very lucky to have been given a private viewing a few years ago, and believe me it is an incredibly beautiful and atmospheric place to go. Oh, you can also stay there, so check it out here!

Oh, nearly forgot to mention that 25th April was Liberation Day! But I have already overdone my word count! So, lest we forget, hats off to all those amazing Partisans who helped rid Italy of the nasty occupiers!