Bentornato to my monthly column, where I bring you up to speed with the previous month’s thrills and spills in beautiful Chianti in Tuscany, Italy.The first week in July was a dust settling one for The Rock Chick Band, after a great concert in the garden of our still fairly new location in the hills above Certaldo. We had a wonderful mix of friends from around the world and a good turnout from local Italians considering the intense competition for musical festas in the area. If you are in Tuscany on 24th June 2017, let me know by email and I will send you an invitation for the next concert party.

You may recall that Farty Barty the grey tiger Tuscan cat was having difficulty settling in to the new home. Well, that all changed and he seemed very content for a while, then went missing for seven days! I was of course worried, this was the longest ever so I stood at the railing on the terrazza and called him, my voice echoing around the valley below us. Ten minutes later he strolled in as if things were perfectly normal. What we had not realised at that time was the poor little lad had a chronic kidney disease and was diagnosed a couple of weeks later. It was finally, with a very heavy heart that he was gently put to sleep on 22nd July after his kidneys failed. He has a lovely spot in the garden on the edge of the countryside he loved so much. I wanted to tell you this because for eight years he played a very important role as my writing companion either on my lap or curled up close by. 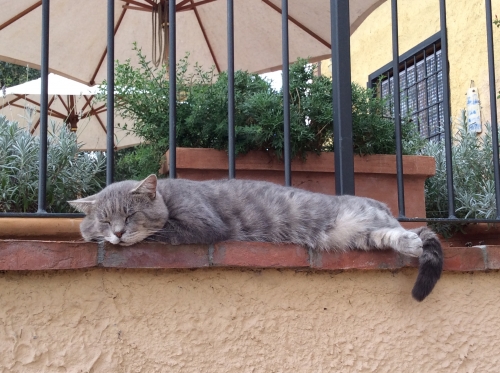 And so to better news. Our local village of Fiano was celebrating the opening of a new Alimentare & Bar! The new one is called La Dispensa, which translates to ‘Larder’ in English, and is a caffé bar, butchers and grocery store all in one. So we locals can buy almost everything there and this hugely welcome in the village after more than six months of being without somewhere to relax with a coffee! Also, being able to go in to meet and greet the locals again lifted my spirits, and helped me to move on to happier times. If you have not spent any time living in Tuscany or indeed Italy, you should know that going out for morning coffee and pastry is a very important start to the day.

Meanwhile, down in our nearest town Certaldo, mid-month was the annual festa called La Mercantia. This is a wildly popular occasion that spans five days and includes street theatre in amazing costumes, artisans demonstrating and selling their wares, other stalls selling local produce and lots of musical performances. It really takes off in the evenings, when it is impossible to park anywhere close and draws Italians and tourists from all over Tuscany.

Over on the political front, there was much unrest in the country, and the government failed to get sufficient support for proposed reforms to the way the country is run. So there will be a public referendum in October. The Five Star Movement and second largest party in Italy, led by radical Beppo Grillo, hope that this will oust Premiere Matteo Renzi. On a lighter note, a member of the aforesaid party and recently elected mayor of Rome, is a breath of fresh air to behold. Why? Well she is female, hugely intelligent, a mother and beautiful. Her name is Virginia Raggi; watch her space!

And what of the ailing Silvio Berlusconi? Well he underwent major heart surgery in July and his own party is having to think about a replacement leader for Forza Italia. He finally agreed the sale of AC Milan football club to the Chinese, so that’s out of his hair or should I say implants. But the political scene will lose a lot of colour without Silvio, so let’s hope he makes a full recovery and remains up there; he will be impossible to replace!

Well that’s enough for now. Do drop me a line at june.finnigan@virgin.net or visit my author site at www.amazon.com/author/junefinnigan

Have a great month. Salute June.