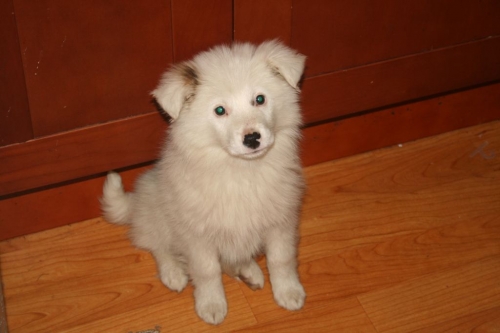 I got used to “cute” living in Korea; cute people, cute toys, cute kids and oh my gosh the babies! Way too cute! But even so I never get jaded over something “cute.” For a professional soft case like myself, I was a marked woman. First, it came in the form of my own choice. I had heard a tale of another teacher who had rescued a dog tied to a lamp pole during a blizzard.The rescuing teacher was a good young man but his priority was to be off clubbing in Seoul on the weekends. Not mine. In fact after 2 years in Korea, I was beginning to miss having a pet around. I was happy to take on the responsibility of having a dog around and envisioned nice little walks around town with my puppy.

So into our house came a… you guessed it… a very cute little Korean dog, a terrier mix we named Nate. It soon became apparent that Nate preferred my son’s company. My adult son, Erik, lived down the hall from me and as I had the bigger apartment, Nate actually lived with me but he suddenly fell madly in love with Erik. We both took walks with Nate and of course I fed him but his loyalties were clear: he chose Erik over me hands down.

After 4 plus years, we were making our plans to leave Korea and return to the states. I started getting the information ready to ship Nate home with us. This was not an impossible task but in order to avoid prolonged quarantines, it was pretty technical. Now, one dog should be enough for anyone to ship internationally so I certainly wasn’t in the market for adding another. Funny how sometimes they find a way of choosing you.

One day while at my school in Giji-si, I was preparing to go home after teaching my classes. Our school was on the third floor of the building and as I stepped out on the landing to head downstairs I saw a little white ball of lint curled up on the floor. Turns out it was a little white, very hairy dog. I asked around to see who he belonged to since the kids had been coming and going all afternoon and I thought he must have followed his person up here. No one claimed him and my head teacher said “he doesn’t belong to anyone.” I leaned down and scratched him behind the ears and headed down the stairs, not really thinking much about it.

By the second floor landing, I realized he was following me down the steps. When I stepped outside and he still followed, I walked him back toward the apartments that were just behind our building. I thought that he must have come from there but as I turned back to go to my car, he still followed. I turned back to the apartments trying to take him back again but out he came, bouncing along until we reached the curb where my car was parked.

The traffic was speeding by and here sat this little fluff ball on the curb of a busy street. I knew that I would never forgive myself if I came back tomorrow and found a smushed rug instead of a bouncy ball of fluff, so I put him in my car and decided we would find him a home before we left to go back to America.

When I got home, I bathed him and realized he was mostly fur and bones. He did not look like a puppy as he was perfectly proportioned and didn’t have those enormous awkward puppy feet that are so cute. 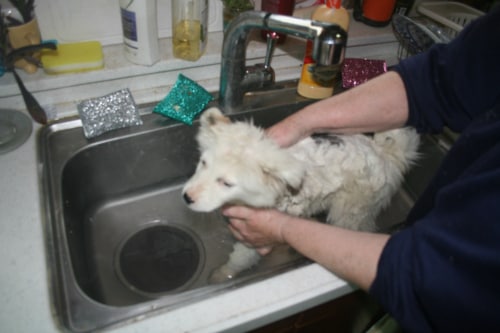 Nate was none too happy with this interloper, but after a few growls, sniffs and minor confrontations, they settled in. I told Erik we needed to ask around to find this little guy a home and he agreed. In the meantime, the little ball of fur followed me around the house and slept on my pillow that night.

By the next day, after we got home from work, Erik said he knew a good home for our friend. I said “great! Who is it?”

“Us.” He said as he held both dogs on his lap in a “puppy sandwich.”

I laughed but Erik was serious. “He is so bonded to you that I really think we should keep him. He should be your dog.”

So Ozzie joined the family. He was named after my favorite baseball player, Ozzie Smith, of the St. Louis Cardinals. As much as I’d hoped he was a full grown dog, I found out that he was in fact a puppy and the vet gave me an estimate of how big he would get. Since our vet did not speak English and I did not speak Korean, this was an interesting conversation and used mostly hand gestures. But I got the drift. He was a Spitz mix and would be a small dog but not a toy size. By Korean standards, he was “big” but again everything in Korea is smaller. By then though, size didn’t matter. I was hooked. 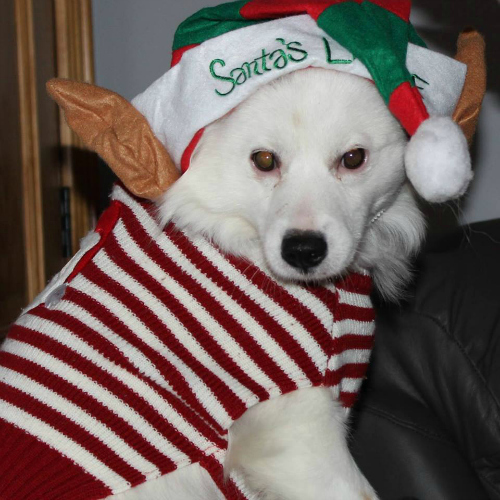 So now that we had saved our little guys from the cook pot—yes, they do still eat dogs in Korea—we had to figure out how to get them home to America. I tried doing this myself as we felt the expense of hiring an agency was too much. I first checked online to see what airlines would allow live dogs to travel as cargo. Some airlines will allow small animals such as cats and tiny dogs to ride in the cabin if their crate fits under the seat. Unfortunately, both our guys were just that little bit bigger and needed the next size up crate so no first class flying for them! In the cargo hold they go!

After I figured out vaccination schedules, types of crates and airline requirements, our Korean friend helped us with the final work of getting us through customs with dogs and making sure the paper work was all correct. That was done in Korea right at the airport. It did mean that by doing it all correctly, once I arrived in the States, I could pick up my dogs right away.

However, getting through customs on the US side was far more difficult than it had been getting them in on the Korean side. The airport people were not very helpful with any of this. It ended up being a nightmare arrival in San Francisco, taking several hours walking to all the places we needed to go to get the paper work done and pick up the dogs. The only folks that were actually very kind and helpful were the guys at the US Customs office. The airport and cargo people were not at all interested in anything but getting through their day and getting home. But at least the dogs did not have to be quarantined.

Having that experience definitely caused me to look for a pet shipping company when I decided to move to Ireland. Even so, it was still a lot of work as we still had to do the vet stuff with proper vaccinations, etc. and the pet shippers helped us set up appointments for all those last minute things such as paperwork and meeting with the USDA to get final approval.

From then on the pet shippers did the actual work of getting the dogs checked in and making sure the paperwork was given to the right people. As we had an early morning flight, we had the pet shippers pick up the dogs the night before and kennel them so they could get them to the cargo area while we were getting through security ourselves. We were flying Aer Lingus and had a three hour layover in Chicago before the overnight flight to Dublin. The pet shippers took care of meeting the plane in Chicago and giving the dogs their potty breaks, food and water, etc.

While we were waiting in the Aer Lingus area in Chicago, I asked one of the Aer Lingus staff at the desk if he could call to see that all was well with the “kids.” He came back a bit later and said “your babies are fine”. We were actually shipping 4 dogs as we inherited two more while we had been back in the US. A few minutes later, he came to tell us that he had been notified that there was a “problem with one of the crates.” He didn’t know which one but assured us all was well and they had resolved it. Once we arrived in Dublin to pick up the dogs, we found Ozzie in a wooden box! (there were airholes of course but…) We could only assume Ozzie, my little hyper Spitz guy, had eaten his cage! He was fine and very glad to see us but we never did learn what actually happened to the crate? I’m not sure I want to know and since my dog is okay, I really don’t think I’ll ask…

Don’t misunderstand. Shipping animals internationally is NOT easy. It IS expensive and it IS time consuming, but if your pets are your family, as ours are, it pretty much is a necessity. Just know that it can be done successfully if you wish to put in that time to make it so.

In my book, “Warning Ireland Home Buyers”, I devote a chapter to shipping your pets internationally and it will give you some helpful websites to check for making this happen as smoothly as possible.

The footnote is that my little Ozzie is indeed an ExPat and has already done two international travels successfully. He is now a happy little Irish Dog and has even picked up the wonderful Irish Brogue!