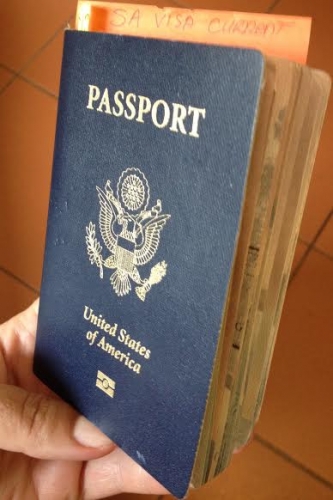 Rumors reached me earlier this year that the “big, fat, American passport” would be no more.

I love reaching for my passport and feeling the heft of extra pages, filled with stamps and VISA stickers, tabbed with post-it flags to guide customs agents to empty pages. I wait for the sound: thhhk; fhump; thhhk; fhump.Sometimes I close my eyes to listen to the stamp pushing into the inky wet pad, and the follow-up fhump as it lands on an empty spot in the book. I find myself disappointed to hear the metal clicks of those increasingly used self-inking stamps.

I take photos of my stamps, bemoan the occasional agent’s sloppiness at skipping pages, or alternatively, at finding a too-small space on an earlier page, far earlier in time than the current date, and ruining a perfect layout of evenly spaced stamps from Maldives, UAE, and Ethiopia.

It’s a weird obsession, I admit. It’s not as though I hop in and out of countries just for a stamp—I do actually want a story and an experience from each place. But I’m also not embarrassed that I love this passport, and am proud of the number of stamps I’ve accumulated in the years since I finally began traveling outside the comfort zone of my home country.

It’s incredible how quickly a person can fill pages while living abroad. Each entry and exit from your expat country of residence requires stamping, and depending on how adventurous you are, each week (or weekend) of vacation will acquire more stamps and VISAs.

One long-weekend excursion to Victoria Falls, for example, can find you border hopping between Zimbabwe, Zambia and Botswana daily, with stamps and VISAs gobbling up pages. In a given year living in South Africa, it’s easy to burn through our pages in weekend hops to Swaziland, Lesotho, Botswana, Namibia, Mozambique, Zimbabwe, and Zambia. I have friends who also consider Madagascar, Malawi, Seychelles and Tanzania “weekend breaks.” (I think they have a bit more stamina and airport tolerance than I.)

I can’t speak for why so many others obsess over collecting stamps, but I don’t think it’s always about the bragging rights. For me, it’s a much more personal sense of pride.

The first couple homes of my memory were trailers in rural parts of Pennsylvania, and in Florida where my dad worked on a construction job. We were given a lot of freedom to roam from the time we were very small, and though I had no idea of the world outside the banks of Scrubgrass Creek, or the sand of Oneco, I was an adventurer, a traveler, a free spirit ready to embrace whatever I encountered.

We later moved to a “real” house, with two stories, a basement, an attic (and two porches!) in the no-stop-light, one-store town of Marion Center, Pennsylvania. I stopped feeling free to roam the streets due to a neighborhood bully, but the lack of movement found me daydreaming of a bigger place in which to escape—the globe.

In Geography class, I would stare at maps, trying to memorize the names of which countries fit into which borders, and if I closed my eyes and saw the shapes, could I match them to the right continents? I sometimes touched the maps, using my fingers to make bridges across the oceans. I thought I was clever at wondering if Santa Claus might not secretly be stationed in Siberia instead of the North Pole. I also wondered if because of that, maybe he liked Russian children better.

I didn’t know any world travelers in Marion Center, but we had some dead relatives who had been missionaries in Africa. Sometimes, I snuck into my mother’s dresser drawer and put on what we called “the Egypt Necklace.” It is a beautiful piece of wood-and-stone jewelry that she, and then I, inherited.

When I wore my mother’s necklace (the necklace of those long-dead relatives) I would look in the mirror and wonder what it would be like to be in Egypt, and whether every Egyptian woman wore that kind of necklace. When I imagined Egypt, it was only from maps. The internet did not yet exist, and the only photographs I saw were of pyramids. But it wasn’t the pyramids I saw when I closed my eyes. I saw the shape of the country: there it sits, in the top right of Africa; there it sits, next to the Red Sea (did we call it the Red Sea then, or the Gulf of Arabia?); there it looks, like a corner jigsaw piece, but the wrong corner—with a smooth west and south it looks as though it really belongs on the bottom left of the puzzle.

When I fly over new countries, I try to get a window seat. I still sometimes imagine seeing the borders on a map. I’m always excited by countries on the edge of water, where I remember those outlines a little more clearly.

The Egypt stamp still eludes my passport. It is replete with colorful pages of red, blue, green and purple stamps, with VISAs adding even more shades of those, as well as pink, yellow, and orange. All those vibrant stamps brought me down to four empty pages before we made our appointment this past June at the U.S. Consulate in Johannesburg.

America, because of the option to have extra visa pages sewn into our books, often has the thickest passport book of any country. You might have seen one of those monsters traveling the world, looking as though their globe-trotting owners might need a special carry-on just to manage them.

Some view them with envy, others with suspicion, still others with an eyeroll that seems to say “silly Americans and their need for more.” For me, it isn’t more as much as it is one: to hold the adventures of my life in one hand; all the emotion and memory of a little girl roaming the woods and hills near her trailer, tracing the outlines of each country on the map, in a single, stamped book.

The plus-sized American passport, soon to be extinct, began as a standard 28-page book, swollen to accommodate a maximum of three additional sets of passport pages. The addition of extra page sets, in packets of 24 pages each, is supposed to be done only in passports still in excellent condition. If you have ever seen those novels-disguised-as-passports, however, they’re generally a little worse for wear.

Using the website of the U.S. Embassy in South Africa, I made appointments for my husband and I, and we went and had pages added. I opted for the double addition of 48 pages. The process was quick and efficient, a same-day drop and retrieve, exact cash only for the purchase.

We will probably have enough pages to get us through our last two years living in South Africa, and subsequent nearby travels. When we run out of room, it will be time to purchase the new-and-improved American passport.

The U.S. passport is apparently getting a makeover (or make-under if you’re one of the super-sized passport travelers who will miss the monster books). It will have a standard 28 pages, and an optional, larger size of 52 pages, but there will be no option for additional sew-ins later. It is, indeed, a final adieu to those nearly 100-page books, and a hello to new books a little more often for international frequent flyers, and most importantly, the much needed protection of chip technology.

And maybe it’s for the best. A passport doesn’t really have the fortitude to absorb a lifetime of the memories and emotion I would project onto it without bursting the seam of those newly added pages. I’m glad I got the additions while they were still offered, and I’ll continue to fill them, occasionally fretting over the non-OCD qualities of customs agents as they thhhk-and-fhump my book.

I don’t know how much (or even if) I’ll miss my super-sized Yankee passport, but I’m glad to have had one. More importantly, I’m glad to have needed a passport at all, to have the opportunity to roam the globe, to be continually changed as I learn from other cultures and people. 2016 has me trekking to Botswana again, as well as Namibia, Ghana and Nigeria. And I’m determined, before this big, fat, American passport is filled, to finally hear the thhhk and fhump from a customs agent in Cairo.

Note: While most appointments at international consulates are over for 2015, those in the states may still be able to apply for additional pages before 31 December 2015. For details, contact the U.S. State Department, or view details on their website here:
http://travel.state.gov/content/passports/en/passports/services/pages.html