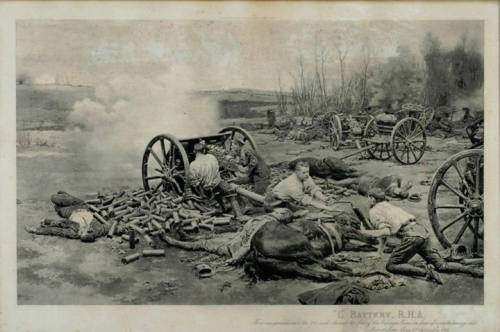 July 1 2016 – 100 years since the murderous Battle of the Somme began. Most families have tales to tell. Here is mine. My Uncle Harry served in the Royal Field Artillery. There are few contemporary photographs of them in action – understandable – but here is one.

A florid certificate hung above the bed he shared with Aunt Alice. It referred to Lieutenant H W Harrison. And thereby hangs a tale. Harry joined up in 1914 as an ordinary Tommy. But in 1916 he was commissioned for valour on the field. The citation does not mention that the sergeant Harry loaded onto a gun carriage and galloped to safety was in fact drunk and incapable. Now at that time young officers were in short supply, and instead of receiving a medal for gallantry Harry was recommended for the King’s commission. He demurred.
“Sir, I do not have a private income.”
“That can be taken care of.”
And Harry was packed off to officer training in Blighty.

Uncle Harry survived the Great War despite being gassed shortly before the Armistice. For many years the gas lingered; I remember him as a grey-haired, grey-faced man working as a laundry van driver. Suddenly, around 1960, the gas gave up the struggle and Harry spent several years as a pink-cheeked old buffer, full of fun.

And now, back in modern day France, François Hollande has given in to the trade unionists and nobody seems to have been tried for criminal damage, assault, etc, etc. As a parent I know how unwise it is to give in to one’s child’s demands: No must mean No. However, M Hollande caved in. Shortly before his capitulation we had difficulty filling jerrycans to power our tractor. There were notices from the Préfecture in every station-service, banning the filling of jerrycans until further notice. I called my favourite journalist, who said, “Do it anyway and say I told you.” Meanwhile, however, after weeks of incessant rain the grass was too long and lush for our little tractor to cope with. Enter Anthony with his huge diesel tractor. He and his mate Nicolas made short work of our acre of ground and carted the rubbish away. Money well spent.

The day after Britain voted to leave the EU we received several calls and visits from anxious locals. They had seen the news on tv and read the coverage in the Journal du Centre, our local newspaper, but they did not seem to realise that this would not be a quickie divorce. Would the Rabsons have to leave after 10 happy years in the Morvan? One friend begged us to go to the Mairie and apply for French citizenship without delay. I hope we reassured them.

We have had Sue and Alan from Nottingham in Charity Cottage for two weeks. I owe a debt of gratitude to our local tourist offices for the wealth of tempting information they supply.

One outing our visitors enjoyed is absent from the tourist blurbs. Alain Faval, an engineer, artist and entomologist, has created an amazing model railway in a huge barn at the back of beyond which also houses the Musée des Mondes Imaginaires at Marigny sur Yonne, with its art and craft displays and concerts. We took Sue and Alan there. It is a long story, but I provided the English translation for Alain’s little books on the ReFeRe and received one of his amazing paintings in return. The printed book is available from LuLu, but you can read it for free here and here. 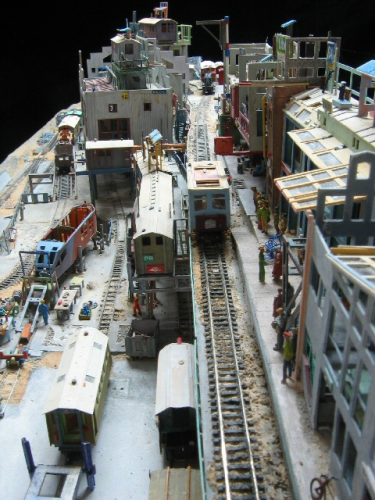 Most model railways run through pretty countryside. Not so the ReFeRe. It majors in industrial wasteland. Do click on the link to read more. 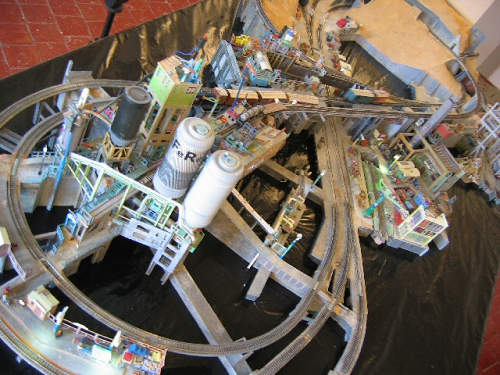 Here is one of my favourite quotes:

On the shiny curved rails two trains speed along in opposite directions, eating up the miles (well, the centimetres) in a series of crisscrossings and near-misses. But all this frantic activity gets them nowhere. Never mind. Think of the pleasure of watching your electric train set, add plenty of ramifications and twists – and enjoy!