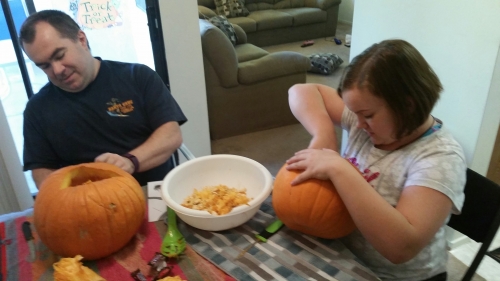 Hallowe’en is a non-event here in the Morvan. Look up Hallowe’en in the big Harraps dictionary and you will find La Veille de la Toussaint, together with an explanation in French, as if Hallowe’en were an esoteric Polynesian custom chronicled in National Geographic. Aldi and Atac, our local supermarkets, have a few packs of supposedly spooky sweets on display, but in 11 years at Maré le Bas I have never opened the door to a troop of trick-or-treaters.The shops are full of pumpkins, but we cook with them rather than carving them to make lanterns as they do in the US. Here are our son Hugo and granddaughter Charlotte carving pumpkins in California last autumn. This year there is a craze for creating ‘Trumpkins‘.

I searched the web for the French President similarly lampooned, but pas de chance.

A rather twee website celebrates pumpkin soup, one of the glories of autumn cuisine – see here. Enjoy.

When I was a child in the West Riding, nobody went trick-or-treating (too busy preparing for Plot Night on November 5) and I had never seen a pumpkin. But at Ilkley Grammar School we always sang For All the Saints in Assembly on November 1, All Saints’ Day. A rousing tune (Sine Nomine by Ralph Vaughan Williams) and inspiring words, and we really belted it out. There is a lot of choice on YouTube. Type ‘For All the Saints Ralph Vaughan Williams’ and take your choice of dozens of glorious performances.

In France La Toussaint (a contraction of Tous les Saints) is a jour férié (a public holiday) and the schoolchildren are on half term holiday.

Digression: Toussaint is both a French surname and a boy’s forename. Toussaint Louverture led the successful slave rebellion in Haiti. It is a thrilling story. A history website says:

At the end of the 18th century a self-educated slave with no military training drove Napoleon out of Haiti and led his country to independence.

La Toussaint is the traditional time for French people to honour their dead loved ones. Strictly speaking, Roman Catholic tradition makes a distinction between La Toussaint (All Saints’ Day) and the Commémoration des fidèles défunts (All Souls’ day, November 2). Dead relatives are supposed to be commemorated on All Souls’ Day, but since La Toussaint is a public holiday, French people honour their dead then. Members of a family usually gather to go to the cemetery together. They put chrysanthemum flowers on the grave and may light candles to symbolise happiness in the afterlife. They may also attend special church services.

Digression: Chrysanthemums are so closely linked to La Toussaint that the French never give them as a gift, as I found to my embarrassment soon after our arrival in the Morvan when my splendid chrysanthemum plant was not enthusiastically received by my hostess.

The supermarkets in Corbigny offer potted chrysanthemums from mid October. Big families may load their trolleys with a dozen or more chrysanthemums plants. Once the chrysanthemums on the graves are past their prime, they end up on the big compost heap outside the cemetery. Keen gardeners rescue particularly fine specimens and nurse them back to health.

Armistice Day is important here. On November 11 (the actual date, not Remembrance Sunday as in the UK) we congregate in the village square. Two veterans with flags lead the procession to the war memorial to lay a wreath. Babette, the local fundraiser, sells paper bleuets in aid of the Red Cross. In Flanders field the poppies grow, but for the French it is the cornflowers that symbolise the fallen. An article in Wikipedia says it all. 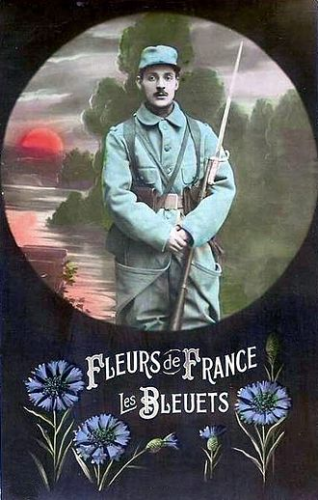 The Mayor in his tricolore sash reads a Loyal Address. A schoolchild reads another address and we all sing the first verse of the Marseillaise, a stirring tune which knocks spots off God Save the Queen. Hear it here. 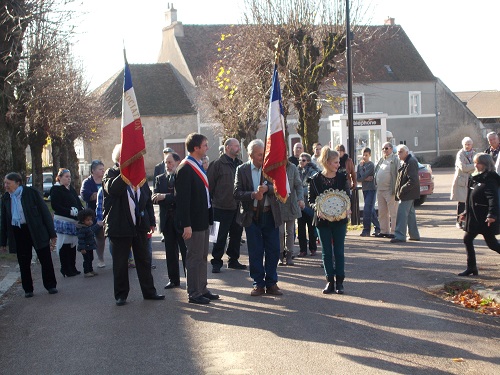 Digression: We ‘did’ the French Revolution in A Level History and I am well aware that, far from being a spontaneous uprising of the downtrodden poor, it was orchestrated by the professional classes, chiefly lawyers and intellectuals. Hilary Mantel’s superb novel A Place of Greater Safety should be required reading…

Then, having vowed that the impure blood of the oppressors will water our furrows, we all process to the Salle des Fêtes for kir and nibbles.

And finally – Movember. Everyone knows about women’s cancers, but men get cancer too. Read all about it on the Movember website.

The Movember slogan is ‘Grow a mo, save a bro’. John survived prostate cancer thanks to early diagnosis and the superb French health service; but two of my friends died of prostate cancer in the UK. That is why John and I support Movember. John has a ‘full set’, so growing a moustache is not an option. But his oldest friend Robin, normally clean shaven, grows a moustache every Movember and we are proud to support him. Read all about it on movember.com.

The Rabsons are now taking bookings for December 2016 and beyond.