Quarré les Tombes is a pretty village with an enticing weekly market. Its claim to fame is not its unremarkable church but the large number of empty stone sarcophagi (tombes) in the graveyard surrounding the church.A Nice Day Out

46 coffins and 66 lids surround the church. There were originally 1000 or more, placed there between the 7th and 10th centuries. They are made of limestone from quarries (carrières) up to 40 km away from the village. They were moved because of building work in the church and the transfer of the cemetery in 1869. The reason for their existence is a matter for conjecture. Some suppose that the inhabitants of Quarré made and sold sarcophagi, or perhaps there was a necropolis here…Anyway, we took some visitors there in September, then drove through the forest to the Benedictine monastery of La Pierre Qui Vire, famous less for the ‘swivelling stone’ (now firmly cemented in place and topped with a statue of the Virgin Mary), which gave the monastery its name, than for learning, cheese and handmade pottery. 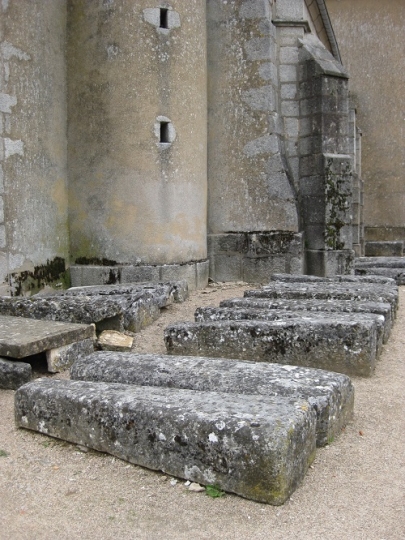 Search under La Pierre qui Vire to see a beautiful video about monastic life and another about the monastery’s farm with its 80 Brune des Alpes cows in production (Charolais – is a beef breed), 50 or 60 calves and heifers coming on nicely, and 100 goats. Everything is organic and their methane recycling system generates electricity.

Forget hoovers and biros – some of the best eponyms are found in the world of horticulture. Our paulownia, planted by the previous owners of our house, did not flower until recently (please enjoy John’s picture), but every autumn our patio is strewn with its handkerchief-size leaves. The genus, originally Pavlovnia but now usually spelled Paulownia, was named in honour of Anna Paulowna, daughter of Tsar Paul I of Russia and queen consort of the Netherlands (1795-1865). Paulownia wood is widely used for boat building and surfboards. Thank you, Wikipedia!

There are many plants named after people and there is a website devoted to selling them. Alongside the Gertrude Jekyll rose there is a camellia named Debbie, and Elizabeth can choose between a potentilla and a clematis. I found a mahonia called Charity. No need to give me rosemary – it grows in my garden and I cook lamb with it.

As I type we have a retired psychologist from Tasmania staying in Charity Cottage. Thereby hangs a tale.

In 2014 Simon Webb planned a stay in the cottage after completing the Camino, the 800 km walk to Santiago de Compostela. Unfortunately he was delayed for several days by terrible blisters – shredded feet. He completed the walk, but there was no time to visit us, as his flights could not be changed. We kept in touch, and in 2018 Simon announced his intention to fly his bike to France to visit the WWI and WWII sites and stay in Charity Cottage.

Not many people know that Australia sent troops to Viet Nam. Simon joined the Australian army at age 18, and in 1968, after infantry training, was sent to Viet Nam. He was gravely wounded in action during the battle of Coral Balmoral. After a long convalescence and several years of study, Simon went to university, initially to read Asian studies, then psychology. After graduating he was commissioned as an army psychologist.

Simon is special to us because he spent many years helping Viet Nam veterans and police and emergency services personnel. Psychological trauma is his special interest, and we are honoured to have him in Charity Cottage, which of course supports Combat Stress.

Engineer, artist and entomologist Alain Fraval has added Le Tartare, another section to his amazing model railway, the ReFeRe, which lives, moves and has its being in a magnificent old barn at Sauvigny. You can read about the ReFeRe here.

Every other model railway I have seen runs through pretty countryside. Not so the ReFeRe: the landscape is industrial and deeply depressing. You can get the flavour here.

I have had the pleasure of translating Alain’s two books about the ReFeRe into English in return for two of his paintings. Translating Alain’s writings is no pushover because, like Lewis Carroll, he invents so many new words. In L’Art Descend sur la Voie he introduced patafixisme. I added a footnote, ‘Think of a lump of Blu-Tak and marvel at the artist’s fertile imagination’.

In September we took some friends to inspect Le Tartare, and I collected Alain’s book for translation. If he is lucky he may have the first draft before Christmas.