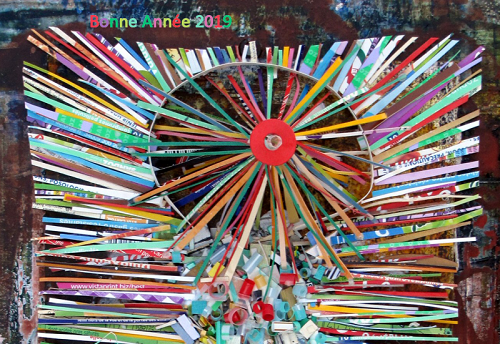 I am typing this on 30 December in the lull between festivities. First there was Le Réveillon on Christmas Eve, with champagne, foie gras and oysters. Christmas Day came and went, with turkey or goose and bûche de Noël and, for new expats, the baffling absence of Christmas crackers, not to mention mince pies and Christmas pudding. God bless the British Corner Shop, which sends Christmas delights all over the world.Christmas cards are rare in France. New Year greetings are more usual. Our favourite is this one from Alain Fraval, creator of the unique and wonderful ReFeRe model railway.

The British Corner Shop can be found here.

My online dictionary translates Boxing Day as le 26 décembre. Indeed, December 26 is just another working day. New Year’s Eve, however, signals another bout of merrymaking here: Christmas – Noël – and Saint-Sylvestre – New Year’s Eve – are islands of jollity with ‘business as usual’ in between. The New Year festivities have little to do with Saint Sylvestre, the fourth-century pope whose feast day happens to be 31 December. You can read all about him on the Britannica website.

Here in the Morvan we are a long way from the special events in Paris. My choice – dream on! -would be the pool party at the Aquaboulevard. 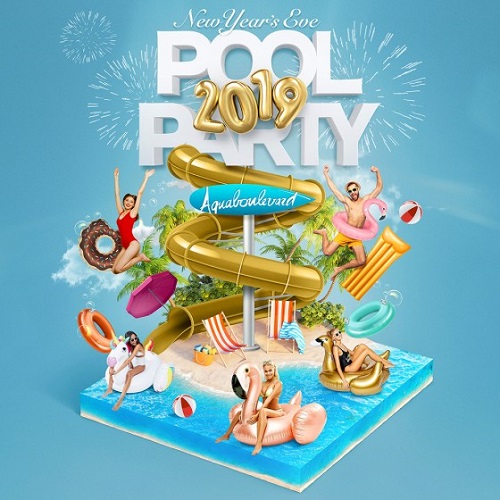 Traditionally the President addresses the nation at 8 pm on New Year’s Eve. There is still a lot of unrest in Paris. I wonder what tidings of comfort and joy Monsieur le Président will bring.

Various charities are offering kind homes for unwanted Christmas gifts. No way would I part with this ash wood pen from Neil Robertson. 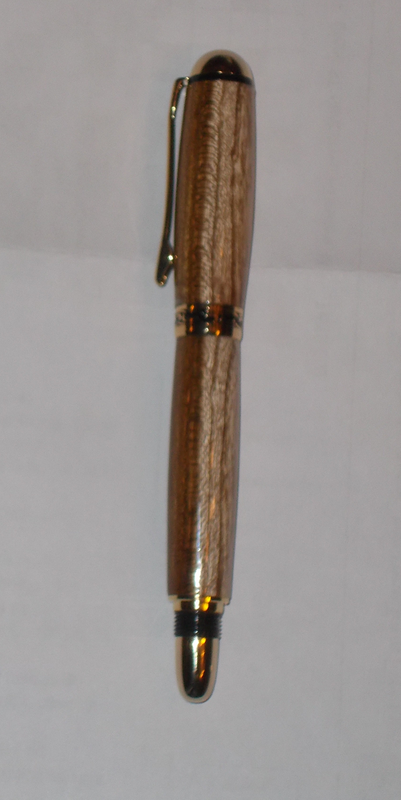 And so we come to Twelfth Night, Epiphany, the last of the Twelve Days of Christmas: the feast of the Three Kings. Before we came here in 2005 Twelfth Night was merely the signal to take down the Christmas decorations, check the Christmas card list and polish off the thank you letters. Here the star attraction is the Galette des Rois. This circle of rich, buttery puff pastry with an almond cream filling – the mot juste is frangipane – conceals a fève, a little ceramic favour. Whoever gets the slice with the fève is crowned King or Queen for the evening. BBC Good Food offer a recipe. As our local Aldi sells rounds of all-butter puff pastry, almond paste – pâte d’amande – and apricot jam, I favour a DIY version with a fève from my collection.

Looking back through my Expat Focus effusions I see that I have mentioned several minor annoyances concerning consumer affairs. Here is a major issue which is still giving us much anxiety and expense. The story began early in 2017 – here’s what I said in my February 2017 effusion:

We have had photovoltaic panels installed on the roof. A government initiative is promoting them in a bid to reduce France’s heavy dependence on nuclear energy. The idea is to generate enough electricity to reduce our eye-watering energy bills and sell any surplus back to EDF at a beneficial rate. John did the research, including asking around fellow engineers who had similar installations. We signed up with AB Energies.

And so, on Wednesday 11 January 2017 Vasili, Zoltan and Sergei arrived. Their mission: to install 10 panels and a new ballon, a hot water cylinder. Nice guys, who communicated with us in fractured French and with each other in Moldavian, they shared our lunch, and all went well until they discovered the new ballon was defective. This would leave us without hot water until a new ballon could be installed. We both grew up in large cold houses where hot baths were a weekly luxury and daily all-over washes in bowls of tepid water were the norm; but by Thursday morning I longed for a bath. Weekendesk were advertising a special offer, and we took refuge in a beautiful hotel complete with jacuzzi. Sure, the hotel stay was costly, but we had had a gruelling few weeks and needed a break anyway.

Digression: I am co-author of Your Consumer Rights in the Pocket Lawyer series, which I see is still available from Amazon, in which I advocated requests for flowers instead of threats of litigation in minor disputes. I told my tale of woe and AB responded with a magnificent bouquet.

On Monday morning the lads installed the replacement cylinder; we would have hot water when it had filled and heated up. Fine, except that they hit a snag concerning the hot air feed from the panels. Anyway, the poor lads worked until 11 30 pm, then bedded down in our guest room rather than kip in their van in minus 5 degrees C. At 6 45 am they were already busy drilling and hammering. I called AB, saying we were glad to provide bed and board, but had someone underestimated the man hours required for installation? At the time of writing I am still waiting for an explanation, but AB have promised 100 euros for Combat Stress: every little helps. Meanwhile the panels will not be operational until EDF have inspected – watch this space, folks.

Since then the situation has deteriorated. John, who keeps excellent file notes, has chronicled the failures, frustrations, buck-passing and eye-watering expense. We are committed to paying 467 euros per calendar month for five and a half years. In return we should be billing the electricity company for the energy generated by the photovoltaic panels. The system has let us down. For the first month of service we received details of the power generated. Since then – nothing, apart from monthly statements that nil data had been received.

The prime contractor, AB, who installed the panels, assured us that their installation was generating power and that the information was being captured. Apart from the first month none of this information has come back to us. When the time came to bill the electricity company for the power we had generated, we did not have the information we needed to enable us to claim.

Now it gets silly. AB have told us more than once that there is an “incompatibility” between the system they installed and our internet connection, and that is why data did not get transferred. Bizarre! Why did it work for a month and then stop? And we have no record of ever being asked about our internet connection; if there were special requirements, why were we not told at the outset? I have in front of me John’s file notes – correspondence, visits from technicians, a replacement unit which passed its installation checks but did not fix the problem…

The French for passing the buck is refiler le bébé à quelqu’un. I have lost patience. I am minded to tell AB to remove their panels, make good, and cancel the deal. In the UK I would know how to go about this. In my glory days I practised law in a place where consumers are treated fairly (see above). Above all, under UK law AB, as the prime contractor, would take responsibility for the system they installed as a matter of after sales service or customer care. French consumer law is defective and I am considering finding a French investigative journalist who knows their way around. New Year’s resolutions are traditional in France as well as in the UK. Well, my New Year’s resolution is to right this wrong. Bring me my bow of burning gold…