January brought snow. Our birds and squirrels cost us a fortune in grain and fat balls.

Squirrels? Yes: far from hibernating, Tufty and Tess visit our kitchen windowsill daily. John took this photograph through the window.We have had photovoltaic panels installed on the roof. A government initiative is promoting them in a bid to reduce France’s heavy dependence on nuclear energy. The idea is to generate enough electricity to reduce our eye-watering energy bills and sell any surplus back to EDF at a beneficial rate. John did the research, including asking around fellow engineers who had similar installations. We signed up with AB Energies. 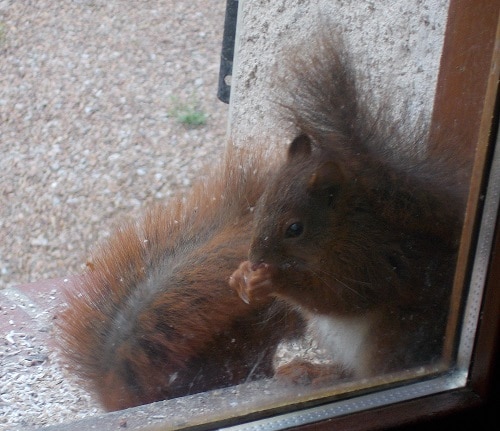 And so, on Wednesday 11 January 2017 Vasili, Zoltan and Sergei arrived. Their mission: to install 10 panels and install a new ballon, a hot water cylinder. Nice guys, who communicated with us in fractured French and with each other in Moldavian, they shared our lunch, and all went well until they discovered the new ballon was defective. This would leave us without hot water until a new ballon could be installed. We both grew up in large cold houses where hot baths were a weekly luxury and daily all-over washes in bowls of tepid water were the norm; but by Thursday morning I longed for a bath. Weekendesk were advertising a special offer, and we took refuge in a beautiful hotel complete with jacuzzi.

Sure, the hotel stay was costly, but we had had a gruelling few weeks and needed a break anyway.

Digression: I am co-author of Your Consumer Rights in the Pocket Lawyer series, which I see is still available from Amazon, in which I advocated requests for flowers instead of threats of litigation in minor disputes. Well, I told my tale of woe and AB responded with a magnificent bouquet.

On Monday morning the lads installed the replacement cylinder; we would have hot water when it had filled and heated up. Fine, except that they hit a snag concerning the hot air feed from the panels. Anyway, the poor lads worked until 11 30 pm, then bedded down in our guest room at John’s insistence, rather than kip in their van in minus 5 degrees C. At 6 45 am they were already busy drilling and hammering. I called AB, saying we were glad to provide bed and board, but had someone underestimated the man hours required for installation? At the time of writing I am still waiting for an explanation, but AB have promised 100 euros for Combat Stress: every little helps. Meanwhile the panels will not be operational until EDF have inspected – watch this space, folks.

Visitors to the Morvan in winter are mystified by displays of crêpe pans, electric crêpe makers and free crêpe recipes appearing in the supermarkets in January. A little early for Pancake Tuesday, surely? Well, yes. But February 2 is La Chandeleur, Candlemas, and pancakes are obligatory.
According to the official website of France, Candlemas commemorates the purification of the Virgin Mary and the presentation of baby Jesus 40 days after His birth. Like Christmas, this is a pagan festival hijacked by the Christian church. 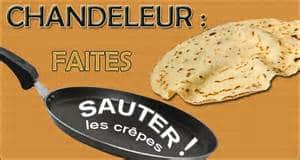 Lupercalia was celebrated in mid-February and is thought by many to have been the origin of St Valentine’s Day. It sounds fun. Plutarch wrote:

At this time many noble youths and magistrates run up and down through the city naked, for sport and laughter striking those they meet with shaggy thongs. And many women of rank also purposely get in their way, and like children at school present their hands to be struck, believing that the pregnant will thus be helped in delivery, and the barren to pregnancy.

Be that as it may, in 472 AD Pope Gelasius I moved Lupercalia to 2 February and renamed it the Purification of Mary. Later the flaming torches were replaced by church candles.

Where do the pancakes come in? You can read all about it and even watch a video of someone tossing a crêpe in slow motion.

Crêpe batter is runnier and eggier than the mixtures of my youth; it makes thin, delicate pancakes, perfect for what our little son called Craps Suzette. 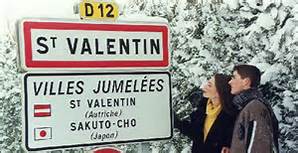 I found disappointingly few Valentine cards in our local shops. There are websites to send your love electronically, of course. Jacquie Lawson has some beautiful ones. There are personalised greetings too. After our son Hugo sent us a JibJab Christmas card, starring the family sledging, I splashed out $18 on a year’s subscription, since when I have been pestering everyone with these electronic ego trips. Our Valentine’s version has a highly unorthodox happy ending. 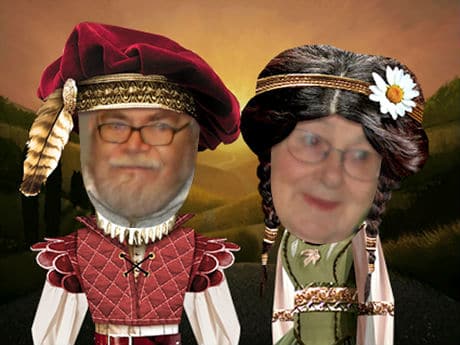 Now that Donald T Rump is the new President of the USA, how about featuring him in a JibJab card?