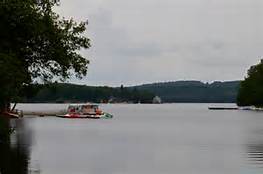 I am typing this on May 30, during a heatwave – une canicule as they say here. It ain’t half hot, Mum, and John has taken to wearing shorts, while I hang out the washing at 6 am to take advantage of the blessed coolth and to put out water for the birds and squirrels and give the geraniums their morning drink.The local tourist newsletter promises all manner of delights, but the Rabsons are preoccupied with entertaining our son Hugo and his wife Adela from California. Meeting them at Paris Charles de Gaulle airport involves some serious logistics. An early morning TGV from Montbard, an hour and a half’s drive from here, goes direct to the airport in time to meet our loved ones. Then it’s taxi to the Gare de Bercy in Paris (the Métro is marvellous for those unencumbered by baggage and untroubled by jetlag) and the next TER back to Montbard.

The TGV – Train Grande Vitesse – is the pride of the French railroad system. You book online and print out your ticket, then sit in comfort while the world flies by at 320 kph. Read all about it here.

You get a longer ride on the TER, the regional network which combines rail and bus travel and does not require booking in advance. Corbigny, 10 minutes’ drive from us, has a TER station and passengers pile onto a minibus to Laroche-Migennes where they board a train to Paris. Read all about TERs here.

Jetlag is known here as le décalage horaire, and with California 9 hours behind France Hugo and Adela took a few days to adjust.

Hugo and Adela are staying in Charity Cottage, which is woefully underused. Combat Stress has yet to send us any visitors this year despite the cheerful handout I produced for them, but a small ad in John’s radio journal produced several enquiries and one firm booking in August.

Long, long ago and for twopence per published word, I wrote the editorial for a local free newspaper, the Suffolk Advertiser. The ads paid for the edit, and my job was to produce enough edit to prevent people from throwing away the Advertiser unread. And so I dreamed up Times Remembered (an old photograph of schoolchildren, shopkeepers or merry harvesters, inviting readers to say who the people were and where the picture was taken), Church of the Month (no shortage of material there; rural Suffolk has some gems) and readers’ Groans and Gloats with comments by ‘RR’.

One of my favourite Gloats was:

Thanks to the skill of Mr Jarvis the vet, our guinea pig Boris will father no more babies, much to the relief of his mate Muffin, who had given birth to four litters since Christmas and badly needed a rest!

Your vet must have a keen eye and a steady hand. I can think of a few men around here who could do with his services.

Most Groans were gripes about local annoyances, but I cherish this one which, you will realise, was written before you could order stuff online:

I asked my Dad to order some things for me from a mail order company. I filled in the form. I even addressed the envelope and gave him the money. All he had to do was sign a cheque, but he still hasn’t got around to it. What can I do?

Make him a round toit of his very own. Take a piece of card 30cm square. Lay a dinner plate on it and draw around the plate. Cut out the resulting disc. Print neatly on the disc: 'This is a round toit. Now you can do everything you promised to do when you got one’. Give it to your Dad.

Here we are in 2017 and I have a Groan and some Gloats to air. First the Groan.

While John and Hugo did clever things with IT at home, I took our daughter-in-law Adela to the Lac des Settons, a beautiful man-made lake in the Morvan, for lunch and a boat trip.

It was a lovely day, so we decided to eat out of doors at Les Sentinelles opposite the landing stage. I had been boasting to Adela that I had never had an unsatisfactory meal in the Morvan. However, Les Sentinelles has just proved me wrong and I have rated it Horrible on the Trip Advisor website. Adela specified a well done burger and a small carafe of rosé wine. After a long wait the burger arrived dripping blood. I like my meat saignant, but Adela does not. The wine did not arrive. I called the waitress to remind her. Eventually she brought it – without a glass! Adela was not impressed.

Now for the Gloats. We have finally sold our house in Suffolk. If it burns down today it is Someone Else’s Problem. A Gloat for our solicitors Fairweather Law. Mark Fairweather and I set up shop at his dining room table in 1992 with the slogan Able, Approachable, Affordable. I have faded into obscurity, but look at Mark now! His website is a joy and even mentions me.

Mark’s property expert, Philip Maclachlan, saw us through an unsuccessful effort to sell The Limes at auction, then fought off an attempt at gazundering by the prospective purchasers and a spurious assertion by their solicitors that we were responsible for a strip of the highway, coupled with a demand for £250 to take out insurance against any comebacks. His fee was lower than we budgeted for, which is something one is rarely able to say nowadays.

While The Limes was unoccupied our friend and former neighbour, Mike Fisher, kept an eye on the place. He and the Rabsons go back to the days when I ran a children’s club in which his two sons – now grown up and successful – were active. Mike sends us the parish newsletter every month and will no doubt make the acquaintance of the new owners of The Limes, who have yet to acknowledge our Good Luck in Your New Home card.

Our letting agent, Gary Everett, must be very relieved to be rid of the Rabsons and deserves a Gloat too. He features in my Expat Focus piece about the flea infestation – see here.

To celebrate the sale of The Limes, we treated Gary and his team to a buffet supper at the local pub, the Elephant and Castle. Gary kindly emailed me this picture. He said, ‘We were specially honoured to be entertained by Donald Trump who you will see was telling us jokes about building a Wall in Mexico and can be seen to the rear left of the picture. ‘